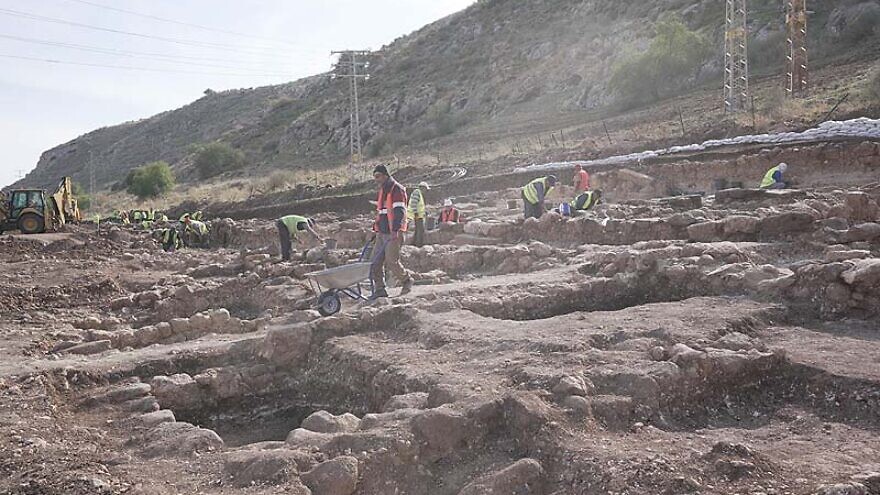 The remains of a 2,000-year-old synagogue in Migdal in northern Israel. The synagogue is the second found in Migdal, which was a large Jewish community during the Second Temple era. Credit: University of Haifa.
Spread the word.
Help JNS grow!
Share now:

(December 13, 2021 / Israel Hayom) A synagogue dating back some 2,000 years has been excavated at Migdal in northern Israel, a modern town and the site of a significant Jewish community in the Second Temple era.

This is the second synagogue excavated in Migdal and the first time archeologists have found evidence of two synagogues coexisting in a Jewish community at a time when the Second Temple was still in use.

Like many archeological discoveries in Israel, the second synagogue at Migdal resurfaced due to infrastructure work. In this case, a salvage excavation ahead of the widening of a nearby highway.

“The discovery of a second synagogue at the Galilee community sheds light on social life and religion of Galilean Jews at that time, and shows the need for a special building to study and read Torah and hold social gatherings,” explained Dina Avshalom-Gorni of the University of Haifa, one of the directors of the excavation.

“The discovery of the ‘new’ synagogue at Migdal, with its many findings such as clay lamps, glass bowls formed from molds, coins and stone vessels used for purification rites, show the Migdal Jews’ ties to Jerusalem and the Temple,” said Avshalom-Gorani.

The main space of the second synagogue was covered in white and colored plaster, and a large stone bench, also plastered, was placed near the wall. The ceiling, which was apparently made of wood, was supported by six pillars standing on stone bases, two of which are still intact. In a small room on the southern side, archeologists found a plaster-covered stone shelf, indicating that it might have served as a storage space for Torah scrolls.

Two millennia ago, Migdal—on the northwestern edge of the Sea of Galilee—was a large Jewish town. It is mentioned in Christian texts as the birthplace of Mary Magdalene, whose last name derives from the name of the town.

The Israel Antiquities Authority excavated the eastern side of Migdal more than a decade ago. The dig revealed a synagogue that dated back to the time of the Second Temple. In the middle of that synagogue, archeologists discovered a unique stone that bore a relief image of a seven-branched menorah, which researchers believed was a depiction of the Temple menorah. The stone is currently part of an IAA exhibit at the Yigal Allon Center.