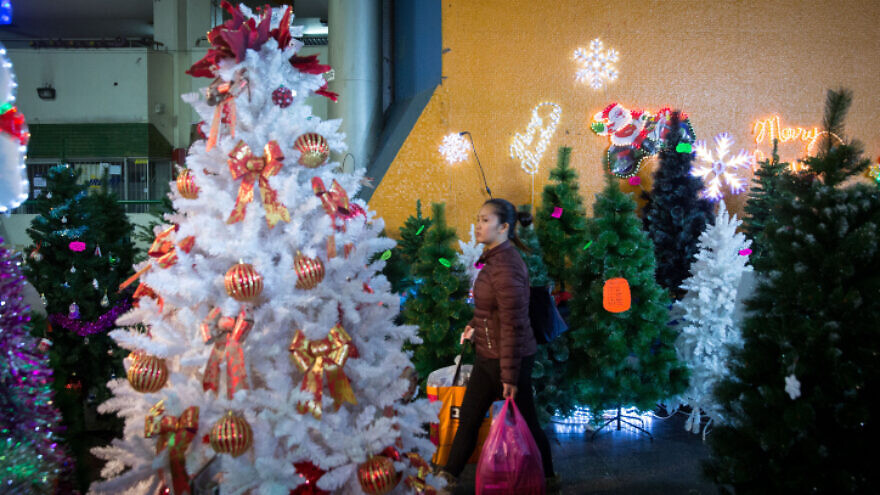 (December 12, 2021 / Israel Hayom) Traditional and Orthodox Jewish students at Tel Aviv University are up in arms over plans next week to hold a Christmas market on campus grounds.

The university will host a series of Germany-focused events as part of Tel Aviv University International Week, including the screening of a German film and the hosting of a German language and culture workshop. Plans to hold a Christmas market on Dec. 15, however, have angered some on campus.

“After years in which the education system and academia have trampled on Jewish values, we are now witness to the next stage: pushing Christian content. We see this in the mixing of Hanukkah and Christmas at schools and in local authorities, and now in the Christmas market Tel Aviv University is organizing,” she said.

“Organizations that cry ‘religification’ when a student asks for the cultural activity they are entitled to include Jewish content encourage and enthusiastically act to push ‘Christian religification’ on all of us,” she added.

Nechama Goldwasser, who heads a high-school parent-teacher forum in Tel Aviv, blasted the move, which she said would have repercussions for high-school students in the coming years.

“I feel there is no proportionality in the treatment of the religion of Jews compared to the religion of others, as the claim of religification comes up day and night while the adoption of Christian values is accepted as pluralism and enlightenment and globalism. I recommend we embrace Judaism—which is ours and has a lot to offer—and develop it as our identity together with acceptance of the other but not self-deprecation to the other.”

Students who spoke to Israel Hayom on the issue asked not to be identified but expressed their discomfort with a Christmas market being held in the middle of a university in the Jewish state.

“They used to get angry about putting a Christmas tree anywhere in Israel, but it seems like all boundaries have been breached. We just celebrated Hanukkah, and we think there is no reason to mark a holiday whose very essence is Christian,” one of the students said.

“I feel like something is broken,” said Levy. “I hear more and more secular parents who are sick of staying silent when our religion and nation are humiliated this way. When we went to high school, no one felt the need to apologize for Judaism being taught as is in Judaism classes, and that created a sense of belonging and uplifting. We’ve now reached a point where children no longer know the significance of Jewish holidays, not even on the most basic level, and the situation only gets worse when they reach academia.”

Levy blasted an upcoming meeting of the Knesset’s Education, Culture, and Sports Committee on “the non-pluralistic Judaism instruction in public schools in violation of a High Court ruling.” She said the Knesset meeting aims to remove “the single prized possession we have left in Judaism classes taught by educational organizations in schools. This is not something we can remain silent about anymore.”

In a statement, Tel Aviv University said it had “raised the banner of the promotion of internationalism and multiculturalism on campus. Within this framework, and throughout the year, the university will hold, in coordination with the embassies, a variety of events dedicated to the countries with which there is academic cooperation, including the US, Germany, Brazil, India, Mexico, and others. Moreover, the university prides itself on the fact that within its framework, hundreds of Israeli and international students study who celebrate Christmas. We invite students and the general public to take part in the multicultural celebration.”