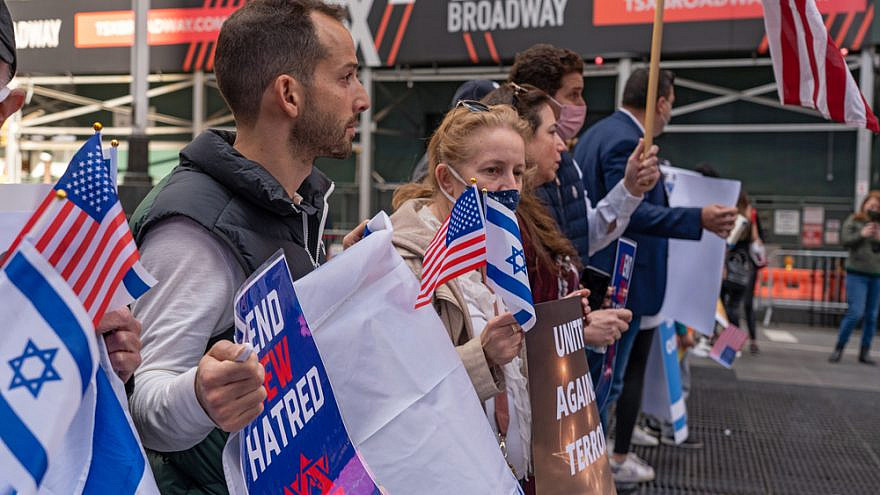 Jewish and pro-Israel gathered in New York City in solidarity with Israel and in protest against rising levels of anti-Semitism and severe anti-Jewish attacks, May 23, 2021. Credit: Ron Adar/Shutterstock.
Spread the word.
Help JNS grow!
Share now:

(January 4, 2022 / JNS) A recent Israel-wide survey has found that almost 80 percent of Israelis are concerned about anti-Semitism globally, with almost three-quarters of citizens (73 percent) believing anti-Semitism is widespread. More than half (61 percent) believe that the problem of anti-Semitism has only grown stronger during the past five years.

The survey of more than 500 Israeli citizens, commissioned by World Likud and conducted by the Shiluv i2r Institute, also found that over half of Israelis (58 percent) feel that Israel’s relations with the Diaspora have been harmed by the current government policy not to allow Diaspora Jews to enter due to COVID-19. More than 60 percent think that Jews living abroad should be allowed to come to Israel during the pandemic, and that the government should open Israel’s doors under humanitarian circumstances and in conjunction with COVID-19 requirements.

Israel’s former Ambassador to the U.N. and Chairman of the World Likud, Danny Danon, said, “The results of the survey emphasize that many Israelis are expressing solidarity with Diaspora Jews and think that we need to establish special circumstances for Jews who wish to visit Israel, especially in humanitarian cases. I call on the Minister of Health to urgently implement a plan that will allow Jews to visit Israel, even during the corona period and under the necessary restrictions, thus preventing further damage to the unique connection Israel has with Diaspora Jewry.”

In late November, the Israeli government issued a blanket ban on foreign visitors to the country in response to the fast-spreading Omicron variant. However, the government announced on Monday that as of Jan. 9, foreign travelers from 199 “orange” or medium risk countries will be admitted if they can provide, they are vaccinated or have recovered from COVID-19. However, citizens from the U.S. and U.K. are among over a dozen countries that will remain on the “red” or high-risk list and prevented from traveling to Israel.

Despite the ban, exceptions have been made for some high priority delegations, including a recent trip by a dozen U.N. ambassadors to Israel as well as Taglit-Birthright groups.

When questioned further in the survey, Israelis responded that the state is not doing enough for global Jewry to minimize anti-Semitism and heighten the sense of security for those facing Jew-hatred. Additionally, 70% of Israelis deem that Jews living abroad are only somewhat or not at all safe living in their current place of residence due to this global issue.

Danon called 2021 “a year which has seen a record rise in terms of the manifestations of anti-Semitism.”

“The ‘Guardian of the Walls’ operation in Gaza in May 2021 and the spread of coronavirus are two of the most prominent explanations as to why antisemitic discourse has intensified on social media more than in the past,” he said. “Israel can and must do more and as such we must create and implement a clear strategy on both an educational and advocacy level to combat anti-Semitic hatred.”

Although more than 90 percent of Israelis think that each foreign government should take responsibility for the anti-Semitism in their country, many also believe that the state of Israel should intervene further to address the issue and stipulate that more is done to ensure the security of world Jewry. Such actions include requesting more from the U.N. and other international organizations (94 percent), and demanding concrete statements and actions from world leaders in order to try and eradicate anti-Semitism (94 percent).