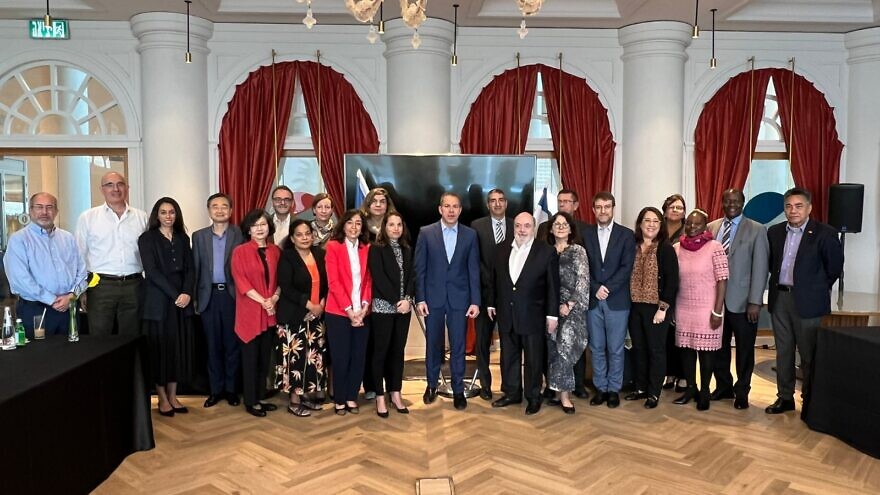 Ambassadors from 12 countries touring Israel to learn more about the country, and to help counter misinformation and bias at the world body, December 2021. Credit: Permanent Mission of Israel to the United Nations.
Spread the word.
Help JNS grow!
Share now:

(December 15, 2021 / JNS) At the invitation of Israel’s Ambassador to the United Nations Gilad Erdan and the American Zionist Movement, a delegation of 12 ambassadors to the United Nations and their spouses arrived in Israel on Tuesday. The delegation includes ambassadors from Albania (who will begin serving on the U.N. Security Council in January), Argentina, Bulgaria, Croatia, Ecuador, Hungary, Nauru, Palau, South Korea, Samoa, Uruguay and Zambia.

As part of the weeklong visit, participants will tour historical sites such as the Western Wall, the Church of the Holy Sepulchre and Arab religious sites; the Yad Vashem World Holocaust Remembrance Center in Jerusalem; modern entities showcasing Israeli high-tech, innovation and development centers. They will visit the Northern and Southern Commands of the Israel Defense Forces and receive security briefings from military officials; see a Hezbollah terror tunnel and Iron Dome battery; and spend time on the Nevatim Airbase and learn about the F-35 aircraft.

“The delegation of ambassadors is of great importance; it is an opportunity to present to them the truth about the State of Israel. At the United Nations, many lies are spread against Israel, and after a week of comprehensive visits, I am convinced that the ambassadors will return to their countries and the United Nations with an understanding of the challenges facing the State of Israel, and our contributions and solutions to global problems,” said Erdan.

The visit is also being sponsored by the American Zionist Movement, which is partnering with Erdan and the Israeli government.

“We hope that the ambassadors come away from the experience with a deeper and more realistic perspective of Israel and the threats it faces, as well as an appreciation for the rich and diverse culture of the State of Israel. AZM looks forward to forging new and lasting friendships with the members of the delegation and their countries,” said Deborah Isaac, president of the American Zionist Movement.