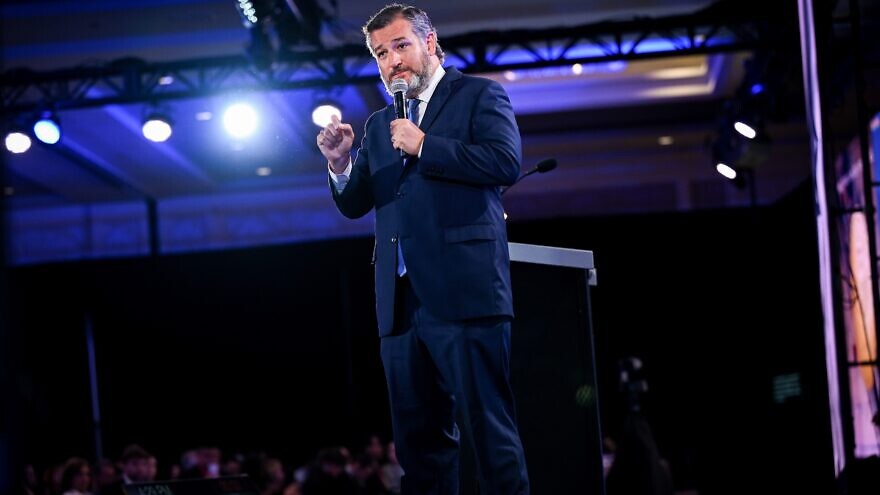 (July 19, 2022 / JNS) Speaking to attendees at the Christians United for Israel (CUFI) summit on Monday, Sen. Ted Cruz (R-Texas) said that U.S. President Joe Biden is repeating the mistakes of former President Jimmy Carter in his foreign and domestic policies.

Cruz told the audience that they are gathered at a time of enormous peril and opportunity, with the flowering of a historic peace in the Middle East as a result of the 2020 Abraham Accords.

He said that for decades, both Republican and Democratic administrations believed that the best approach to Israel was ambiguity, which has proven ineffective. He urged the audience to compare that to the strategy he and former President Donald Trump advocated, which was to “draw a bright line and say the United States stands unambiguously with Israel.”

Cruz credited two earlier actions taken by Trump for the success of the Abraham Accords: the long-promised relocation of the U.S. embassy from Tel Aviv to Jerusalem in May 2018 and the withdrawal from the Obama administration’s Joint Comprehensive Plan of Action (JCPOA) with Iran that very same month.

The senator said that he pushed for both decisions directly with Trump against the advice of then-U.S. Secretary of State Rex Tillerson and former Defense Secretary James Mattis, who argued that the president should stay in the Iran deal and keep the embassy in Tel Aviv.

Cruz complimented Trump for “having the courage” to overrule his own advisers to make the decisions. He said that during the signing ceremony of the Abraham Accords on the White House lawn in the fall of 2020, foreign ministers and ambassadors from the United Arab Emirates and Bahrain told him that the decisions showed their nations that if they wanted to be friends with America, then they had to be friends with Israel as well.

For the majority of his speech, Cruz criticized the foreign policy of the current U.S. president, saying that Biden has reverted to the same failed policies that undermine our allies and elevate the enemies of Israel in the region, in addition to allowing hundreds of millions of dollars to flow to Hamas and other terrorist organizations seeking to kill Israelis.

“Now, we’re in troubled times today. Joe Biden is president of the United States, or so they say,” he said, to laughter from the audience.

“On the embassy, the Biden White House would desperately want to close our embassy in Jerusalem. But even they know politically that’s untenable,” said Cruz. “So their alternative strategy is they want to open a consulate to the Palestinians in Jerusalem.”

He said that opening a consulate in Jerusalem isn’t needed to give consular services to the Palestinians, which can be done in Ramallah, but it is to “elevate Palestinian claims to sovereignty to the city of Jerusalem.”

Cruz turned to his second issue with Biden: His desperation to re-enter the JCPOA. Cruz said the only reason this hasn’t been accomplished is because Iran is so extreme that it “won’t take yes for an answer.”

He added that he pushed legislation in the Senate to prevent both things from happening.

Cruz criticized the negotiations with Iran, especially the administration’s previous discussions about delisting the Islamic Revolutionary Guard Corps from the U.S. list of Foreign Terrorist Organizations, despite the organization being the “leading state sponsor of terrorists on the planet,” and actively trying to assassinate former Secretary of State Mike Pompeo and National Security Advisor John Bolton.

“Some of y’all in this room are old enough to remember the 1970s. … I think Joe Biden is eerily, uncannily, repeating the mistakes of Jimmy Carter,” said Cruz. “I was a kid in the ’70s. I remember double-digit inflation, gas lines around the block. Our hostages languishing in Iran for 444 days while a weak and feckless president wrung his hands, unable to react.

“Right now in Georgia, Jimmy Carter is going, ‘Yes! Not worst president ever!’ ” he said.

Cruz concluded, saying that the analogy between Carter and Biden gives him hope “because it took Jimmy Carter to give us Ronald Reagan.”