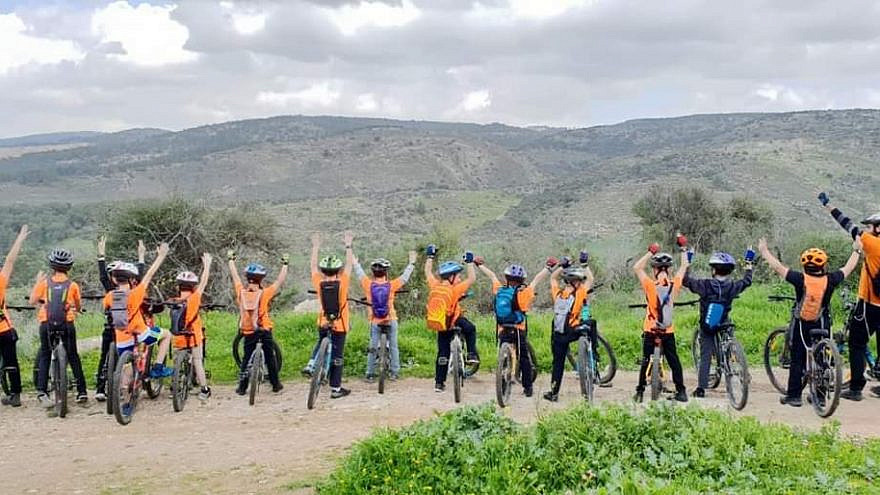 (April 13, 2021 / JNS) Six-year-old “A” (name withheld upon request) was growing up plagued with anxiety. Living in a community in central Israel, his mother “S” told JNS that her now ex-husband, the boy’s father, was both physically and mentally abusive towards his son.

“We were living minute to minute through very difficult times,” she said. “I was trying to secure my freedom from this man, and instead of giving me a get [a Jewish divorce document], he fled. So in addition to the angst from the abuse, my son was living with a hole in his heart while also battling painful memories.” She was at a loss on how to help her son get by.

Through a neighbor, “S” learned about Geerz—a therapeutic, mountain-biking program in Israel founded in 2012, whose educational curriculum is designed to help kids struggling with behavior problems, ADD/ADHD, anger management, family dysfunction, adolescent eating disorders, and other psychological and physical issues.

Geerz currently works with 350 at-risk youth in nine cities and one youth village throughout the country ages 6 to 15, offering weekly mountain-bike-riding sessions. The bicycle is the tool used by the organization to teach a different life skill on every ride.

“S” says that a Geerz instructor started picking her son up and taking him to the weekly scheduled group rides. “It’s not just about riding a bike,” she said. “The instructor gave him attention and instilled with him a sense of pride by giving him encouragement. He gained a sense of self-respect through weekly accomplishments and successes on the bike. It really strengthened him.”

Now at the age of 13, S says that her son is “king of the neighborhood” and very involved in various sports. She gives Geerz the credit for turning around his childhood.

Geerz is the brainchild of Nachum Wasosky, who made aliyah in 2008 with his family from a suburb outside Denver. With a background in informal education, Wasosky had been running a center for at-risk Jewish teens in the area with the goal of keeping them off the streets. 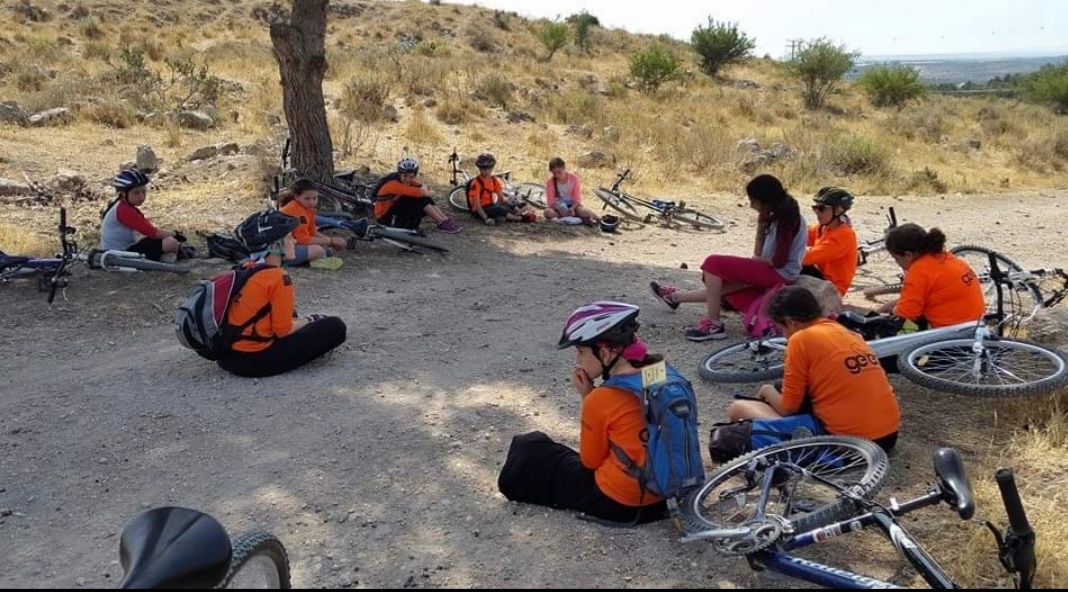 Israeli kids rest while on a bike ride as part of the Geerz program. Credit: Courtesy.

After moving to Israel and obtaining a degree in marriage and family therapy from Bar-Ilan University in conjunction with the Ministry of Education, Wasosky opened a therapeutic center for at-risk teens in Beit Shemesh, servicing many children whose families immigrated to Israel and were struggling with acclimating to a new country.

With a passion for mountain biking, Wasosky decided to take the youth out on a two-hour ride one Friday morning on the condition that they stayed away from drugs or alcohol the night before so that they would be prepared to ride.

Wasosky told JNS that “on that very first ride, I saw the light. There was something about being out in nature, doing an extreme sport and without electronics.” He recounted that during that ride, the very popular “stud” of the group was frustrated and cursing that he couldn’t make it up a steep hill, so he took out a pack of cigarettes and ripped them up, indicating that he would quit smoking.

With additional rides scheduled, and more and more teens showing up every week, Wasosky—with encouragement from local parents—decided to focus his attention exclusively on the bike rides.

In partnership with his wife, Shana, an educator, the pair assembled a 150 classes-long curriculum focusing on life lessons that teens could learn from mountain biking.

“We just started writing down life lessons—focusing on perseverance, independence, resourcefulness. When a rider overcomes his or her fear of riding down steep hills, he or she can learn how this can be applied in personal life situations during difficult times, when these kids need to overcome hurdles.”

Wasosky said that to his knowledge, the curriculum, which was recently updated with the help of a clinical psychologist and a social worker, “is the only one of its kind.”

‘Away from chronic addictions to technology’

Today, Geerz employs 50 instructors who lead the various weekly 1.5 hour riding groups during the school year. Some 75 percent of the Geerz participants are children of families who immigrated to Israel, while 25 percent come from local Israeli families. The instructors lead the rides in Hebrew or English, depending on the composition of the group. Wasosky said that the kids who participate come from a wide range of backgrounds. “We have kids who are secular, Modern Orthodox, ultra-Orthodox; we have girls groups and boys groups.” 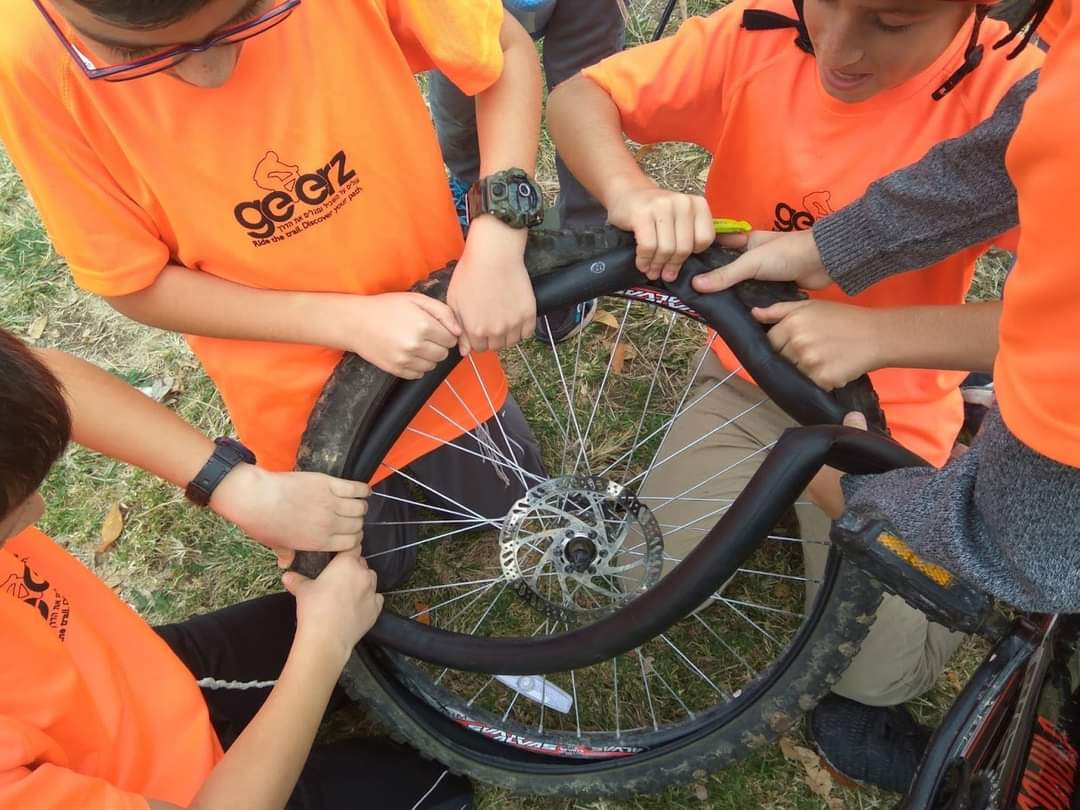 Children come together to repair a bike tire. Credit: Geerz.

There are even riding groups in the town of Sderot along Israel’s southern border with Gaza, where many children suffer from PTSD as a result of the terrorist rocket attacks that have scarred the youth in that area for years.

Wasosky shared a story of a young boy in Sderot who refused to leave his house by himself for three years for fear of getting hurt in a rocket attack. “One day after starting in Geerz, the boy called his mother on the phone and said he was going out to join his group in order to ride. When he told his mother he was going out by himself, she broke down crying on the phone. The kid just wanted to be with his group and his instructor.”

“The incidents of juvenile suffering have increased dramatically over the years. Traditional therapy is expensive and isn’t always effective. Geerz uses an innovative and efficient approach that promotes mental and physical health by getting these kids out in nature—away from their chronic addictions to technology, which is a major problem today, and these kids respond.”

Wizman, who immigrated to Israel in 1996, said that the “Get Into Geerz” ride is a peer-to-peer fundraising event to assist programming throughout the country.

Participants obtain sponsorships from family and friends in order to join the two-day bike ride on scenic and challenging trails in Israel, to benefit the organization.

“What’s unique about the event,” said Wizman, “and the reason it is so salient is that the riders who join us recognize the powerful impact biking has on their own lives. They can therefore see what kind of an impact it can have on a child who is suffering.”

Wasosky said the weekly Geerz rides are really “therapy in disguise,” explaining that “there is no stigma involved of ‘I am in therapy.’ We succeed where traditional therapy fails. And for many kids, they tell us this is the highlight of their week.”

Click here for more information about Geerz or the two-day “Get Into Geerz” charity bike ride taking place in northern Israel from May 2-4.