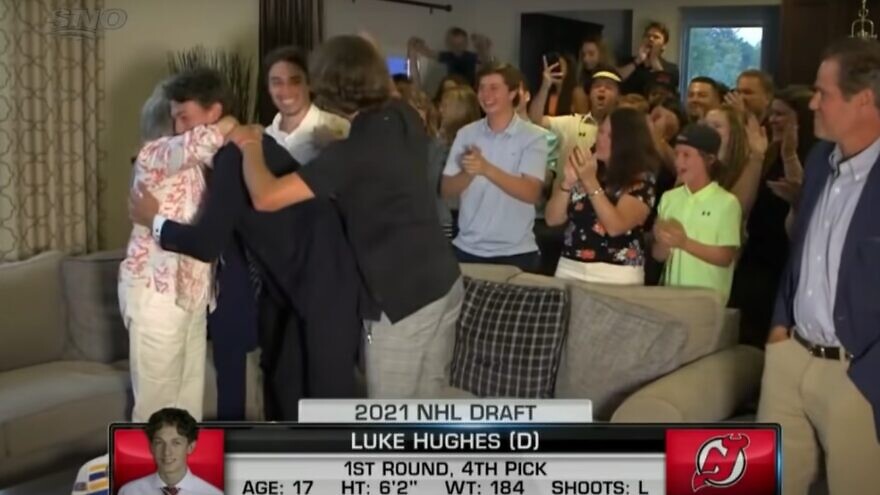 Luke Hughes celebrates with his family after being selected in the first round of the NHL draft. Source: Screenshot.
Spread the word.
Help JNS grow!
Share now:

(July 30, 2021 / JNS) Three Jewish brothers became the first American family to have three siblings picked in the first round of the National Hockey League (NHL) Draft.

Luke Hughes, 17, became the third brother in his family to be drafted by the NHL when it was announced last Friday that he would play for the New Jersey Devils during the 2021 NHL Draft live from the Prudential Center. The defenseman from Canton, Mich., was the fourth overall pick in Friday’s selection and joins his brother Jack on the team.

Jack, a center, was picked first overall by the Devils in 2019, which made him the first Jewish hockey player to ever be drafted in the number one spot. In 2018, the oldest Hughes brother, Quinn, was drafted by the Vancouver Canucks as the seventh pick.

The Hughes brothers come from parents who were also hockey players.

Their mother, Ellen Weinberg-Hughes, who is Jewish, played hockey, soccer and lacrosse at the University of New Hampshire. She also competed for the United States and won a silver medal at the 1992 IIHF Ice Hockey Women’s World Championship. Their father, Jim, was a hockey player for Providence College, an assistant coach for the Boston Bruins and held an office job with the Toronto Maple Leafs.