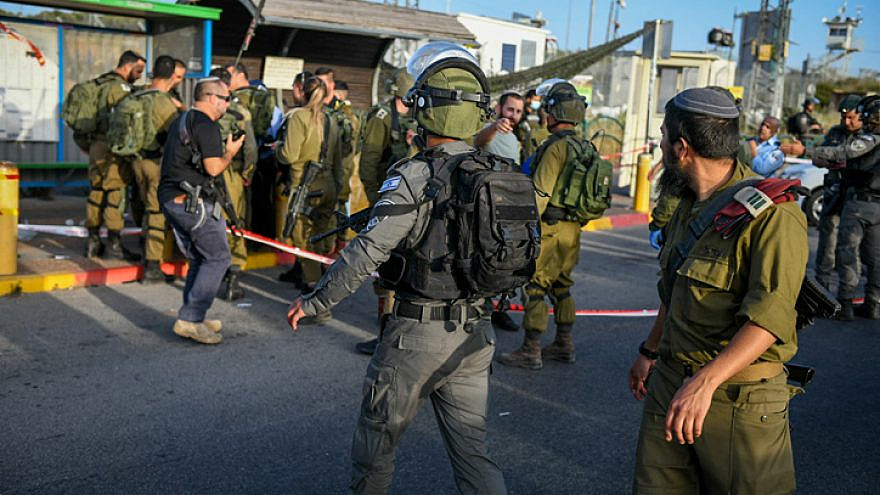 Israeli soldiers and police inspect the scene of a shooting attack at the Tapuach Junction near the city of Ariel in Samaria on May 2, 2021. Photo by Sraya Diamant/Flash90.
Spread the word.
Help JNS grow!
Share now:

(May 2, 2021 / JNS) Three 19-year-old Jewish students were injured on Sunday in a drive-by shooting at the Tapuach junction near the city of Ariel in Samaria.

Two of the injured were evacuated to the hospital in critical condition. One sustained light injuries. The incident occurred as a car pulled up alongside a bus stop, and the driver or passenger opened fire before fleeing the scene.

Israel Defense Forces troops in the area fired at the fleeing vehicle. A search is now underway for the terrorists.

“I send best wishes for the recovery of the people who were wounded in the vicious shooting attack at Tapuach junction,” said Israeli Prime Minister Benjamin Netanyahu after the shooting. “The security forces are in pursuit of the terrorists, and I am certain that they will apprehend them as soon as possible.”

“We will not allow terrorism to raise its head, and we will strike our enemies with force,” he added.

Earlier in the day, IDF soldiers shot a Palestinian woman carrying a knife at the Gush Etzion junction in Judea and reportedly attempting a stabbing attack. The terrorist, pointing her knife at IDF soldiers as she approached them did not respond to commands to drop the weapon or to a warning shot in the air. A soldier then shot the woman in the leg.

She was taken to the hospital in critical condition, where she later died of her wounds.