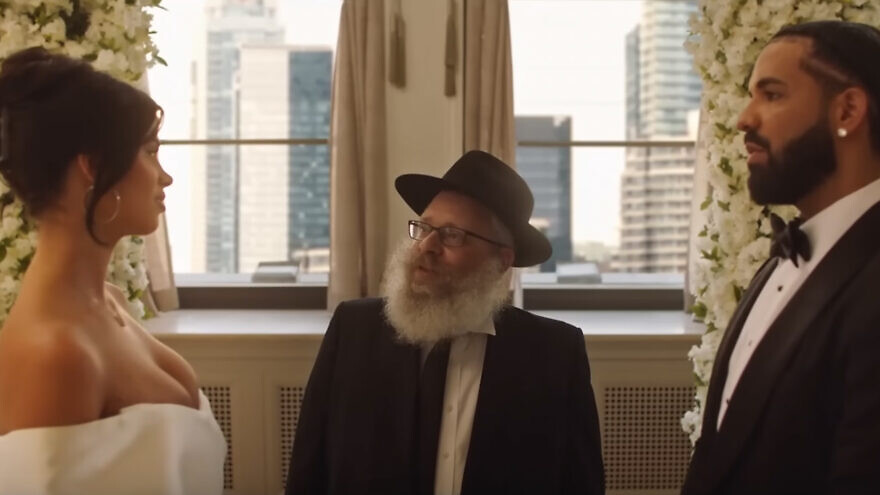 A still from a music video for the song "Falling Back" by Drake. Source: YouTube.
Republish this article
875 WORDS
Spread the word.
Help JNS grow!
Share now:

(June 29, 2022 / JNS) If he isn’t already, Rabbi Ari Sitnik will soon be the most-seen rabbi in the history of the internet, all because of a single video.

The Brazil-born Sitnik, 52, appears at the beginning of Drake’s new music video for his song “Falling Back,” which has already garnered more than 11,000,000 views on YouTube.

The video begins with former NBA center Tristan Thompson telling the Canadian-Jewish rapper and singer (whose real name is Aubrey Drake Graham) in a side room that he can call off his wedding. Outside, Sitnik puts on his glasses and adjusts his tie.

Drake enters the wedding venue and stands next to his wife-to-be. Behind her, however, stand about 22 other brides. Sitnik asks Drake, “Do you commit yourself to being a good husband according to our values and traditions?” He asks the brides the same thing—substituting the word “wife” for “husband”—and then pronounces them married after they say “I do.”

Drake then gives rings to the brides standing behind his new wife, along with elaborate handshakes.

A still from a music video for the song “Falling Back” by Drake. Source: YouTube.

At first, Sitnik said, he didn’t know that he would have a speaking part, and added that the response to his brief appearance has been positive.

The rabbi received his smicha in 1992 from Chabad headquarters in Brooklyn and studied in yeshivas in Los Angeles, California and Morristown, New Jersey. He works in IT and is not a pulpit rabbi. He got the role in Drake’s video through Stu Stone, with whom he worked with on a video for the organization Tomchei Shabbos, which helps provide Sabbath meals to the needy.

“Drake could have chosen anyone for this role, and he chose a real rabbi,” Sitnik said. “It wasn’t shown in a negative way. Drake chose to connect to his Jewish roots in a positive way. Kudos to him.”

While the video was shot over the weekend of May 28-29, Sitnik said the filmmakers accommodated his observance of Shabbat, shooting his scene on Sunday instead of Saturday. They also arranged a kosher meal for him.

Sitnik said he was particularly happy with his role because usually, when religious Jewish men are depicted on film, “the beard is fake and the payis is fake.” He added that religious characters are often demonized on television and he wanted to show a more positive image.

The rabbi did not consult anyone about taking the role. “Whether I should have asked another rabbi will remain an unanswered question forever because I didn’t ask anyone,” he said. “I didn’t ask permission from Chabad or anyone. If anyone is offended, we can have a conversation.”

He said he was familiar with Drake’s work on the show “Degrassi: The Next Generation.” However, Sitnik admitted, he wasn’t aware of any of Drake’s songs, because he is not a fan of rap music. But when a reporter sang the lyrics “you used to call me on my cell phone,” something clicked and the rabbi sang along.

The Drake video wasn’t the first time Sitnik has appeared on film. He was an extra in a TV movie called “Crown Heights” and an episode of NBC’s “Nurses” that was taken off the air due to a controversy over its depiction of religious Jews.

“All I did in my part was accompany the patient out as he was moved in a wheelchair,” Sitnik said. “The controversy was that the episode featured a Hasidic guy who injured his leg and needed a bone or a skin graft, and he didn’t want to receive one because it could come from ‘a goyim or a woman.’ So, it was halachically inaccurate and grammatically incorrect. It created an anti-Semitic tone. If he had said ‘I don’t want it from an evil person,’ it would be just as good for the show; still halachically incorrect, but it wouldn’t have drawn so much negative attention.” Jewish religious law contains no prohibition on transplants from women or gentiles.

Sitnik said he doesn’t rap or sing. “I joke that I can bring a congregation to tears because of my voice, but not for good singing,” he noted.

He said that if he could act in a film with any celebrity, it would be Mel Brooks, because he heard that while fighting in the Battle of the Bulge in World War II, Brooks set up a sound system and piped in a recording of Jewish singer Al Jolson to annoy the Germans. He also likes Brooks’ outlook on life and that his brand of comedy spares no one.

“Life’s too short to be taken too seriously,” Sitnik commented.

He said he’s served as the master of ceremonies at a wedding, but never officiated at one. Asked how he met his own wife, Sitnik recounted, “My chavrusa [Talmudic study partner] got engaged to a friend of my wife. The two of them sat down and said, ‘I know this one’ and ‘single-single,’ so they thought to introduce us. I went from New York to Toronto, and it’s been over 26 years.” He and his wife have four children.

Sitnik said if he were offered more acting gigs, he’d consider them, “but I’m not quitting my day job just yet.”