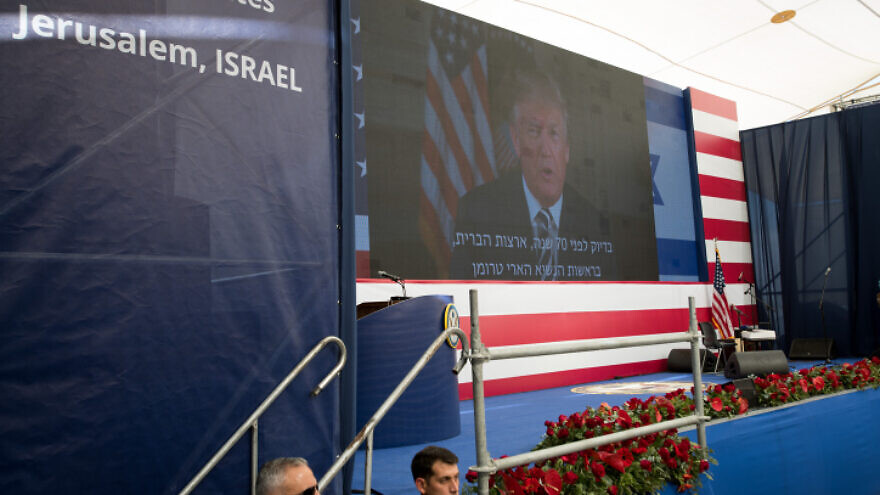 Then-President Donald Trump speaks on a video screen during the opening ceremony of the U.S. Embassy in Jerusalem, May 14, 2018. Photo by Yonatan Sindel/Flash90.
Spread the word.
Help JNS grow!
Share now:

(December 18, 2022 / JNS) Former U.S. President Donald Trump told a gathering of Orthodox Jews on Friday that he was the “best ally they’ve ever had,” before warning that Congress had become “almost anti-Israel” because some Democrats “hate Israel with a passion.”

In his speech at the annual President’s Conference of Torah Umesorah—National Society for Hebrew Day Schools, held at his Trump National Doral Miami golf resort in Florida, he quoted part of his 2019 State of the Union address highlighting the need to combat antisemitism.

Ye has over the past two months repeatedly made antisemitic statements and also expressed admiration for Hitler in an interview with Alex Jones. Fuentes is known for his bigotry and Holocaust denial.

Following the Nov. 22 dinner, Ye claimed that Trump was very impressed by Fuentes, while the former president said in a statement that he did not know who Fuentes was but stopped short of condemning him.

At the time, the Simon Wiesenthal Center denounced the former president and called out Fuentes’s past statements, which included questioning the murder of six million Jews in the Holocaust and saying, “I piss on your Talmud. Jews get the f***k out of America.”

The Orthodox Union (OU) pointed out that West’s comments—such as tweeting to his 31 million Twitter followers he was going to go “death con 3” on Jews—have already resulted in antisemitic incidents in Los Angeles and Jacksonville, Fla. where the message “Kanye is right about the Jews” has been displayed.

The Trump administration’s former special envoy to monitor and combat antisemitism, Elan Carr, tweeted: “No responsible American, and certainly no former President, should be cavorting with the likes of Nick Fuentes and Kanye West. To placate antisemitism is to promote antisemitism. President Trump must condemn these dangerous men and their disgusting and un-American views.”

Trump made no mention of the dinner with Ye and Fuentes during his address on Friday, nor has he apologized for the encounter.