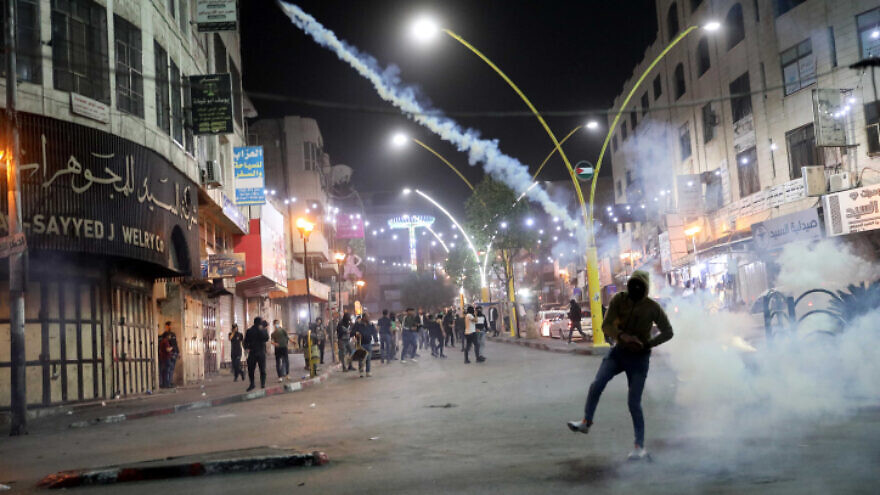 (April 18, 2022 / JNS) Two Palestinian gunmen were seriously wounded during a firefight with Israeli forces operating in the Jenin area on Monday, according to Israeli media reports.

The clashes occurred in the village of Al-Yamun, 9 kilometers west of Jenin, Mako reported, citing Palestinian sources. No Israeli casualties were reported.

Eleven terror suspects were arrested in raids across Judea and Samaria on Monday, the Israel Defense Forces said in a statement.

After entering Al-Yamun to apprehend a suspect, soldiers encountered resistance, the IDF said,

“During the operational activity, dozens of Palestinian rioters violently attacked the soldiers. The rioters hurled rocks and explosive devices and fired at the soldiers, endangering their safety. The soldiers responded with live ammunition toward the suspects who hurled explosive devices. Hits were identified,” the military said.

Security forces also conducted counterterror activities in Husan, 9 kilometers west of Bethlehem, according to the IDF.

“This past Tuesday, an Israeli civilian was trapped in a violent riot which was instigated by Palestinians in the town of Husan. The civilian was violently attacked by the rioters, who hurled rocks and burned his vehicle. Overnight, security forces apprehended four suspects who were involved in the attack,” the IDF said.

Israel has launched a series of pinpoint counter-terror operations to apprehend suspects and seize illegal weapons  in northern Samaria, with a particular focus on Jenin, after two terrorists from the area conducted deadly terror attacks in Israeli cities, one in Bnei Brak on March 29, murdering five people, and the second in Tel Aviv on April 7, murdering three civilians.

During those operations, in the town of Kafr Dan near Jenin, dozens of Palestinians violently attacked the soldiers, shot at the forces, and hurled IEDs at them, endangering their safety, the Israeli military said. Soldiers responded with live ammunition. Palestinian media reports said two gunmen were killed by the IDF in that incident.

During a meeting in Ramallah on Sunday attended by Jenin’s governor, Palestinian Authority Prime Minister Muhammad Shtayyeh said that “Jenin is supplying a picture of resistance of the first order, through the steadfastness of its residents,” according to Mako.