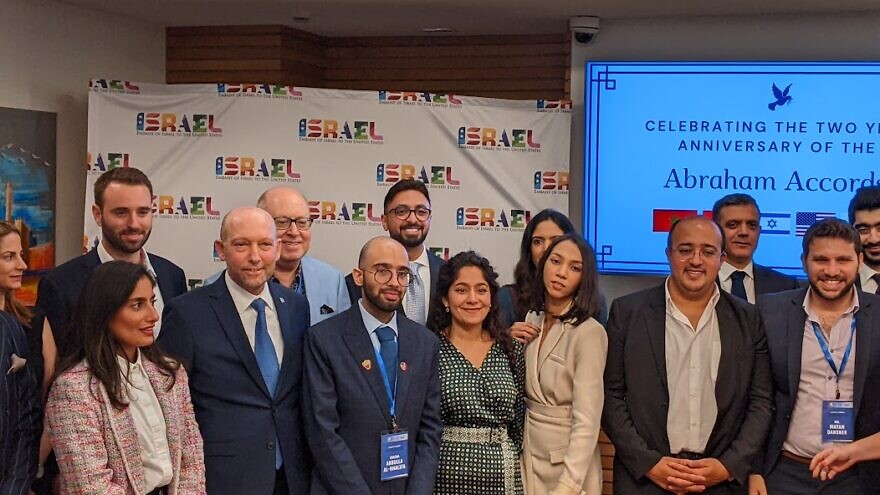 Leaders of Tomorrow program participants attend a reception at the Israeli embassy in the U.S. capital, Sept. 15, 2022. Courtesy of the Israeli Embassy in Washington.
Republish this article
682 WORDS
Spread the word.
Help JNS grow!
Share now:

(September 20, 2022 / JNS) As events were held across the Middle East last week marking the second anniversary of the Abraham Accords, a group of young Israelis, Emiratis, Bahrainis and Moroccans decided to take the celebration to America.

The Leaders of Tomorrow program, a joint initiative of the Tel Aviv-based ISRAEL-is organization and Mimouna Association of Morocco, took a coalition of young leaders from all of the Abraham Accords countries to the United States. The group was met by officials from the White House, State Department and Congress, and held a roundtable discussion with members of the Abraham Accords Congressional Caucus from both parties.

“I think it’s amazing to come here on the second anniversary of the Abraham Accords and see how passionate the congressmen and women are here about the accords and about the normalization in the region. It’s really a cause for optimism,” Matan Dansker, director of strategy and content for Israel-is, told JNS.

“It’s kind of a miracle to get Democrats and Republicans alike in the same room. And we’re happy that it’s for such an important cause like this after years of despair in the region, this boost of optimism so that we in Israel-is can expose the fruits of the Abraham Accords on a people-to-people level to the Abraham Accords Caucus,” said Dansker.

The Caucus revealed in the meeting that it was planning to send a congressional delegation to the Abraham Accords countries.

“We want to bring members of Congress to see for themselves on the ground the fruits of what is a historic agreement, these Abraham Accords. To be able to go to Israel, to go to Bahrain, to the UAE, to Morocco, to meet people who are benefiting from these accords, talk to those who are realizing those benefits and making sure that they last in the future,” Schneider told JNS.

The young leaders also met with representatives of the European Union, think tanks, academics, faith leaders, students and philanthropists in events across Washington and New York.

“Leaders of Tomorrow is a great platform for connection and collaboration between young and talented professionals from our nations, throughout which we will discuss local, national and global issues and come up with creative and innovative solutions,” said Majed Alseyabi of the UAE Youth Council. “As an Emirati, I’m part of the Abraham Accords. I believe that it’s my responsibility to build connections and culture to enhance a warm peace based on tolerance and coexistence.”

One of the members of the delegation, Bahraini financial tech specialist Hend AlJeeb, is a student at the University of Central Florida. Her participation in the Leaders of Tomorrow program marked her first direct connection with an Israeli.

“It’s just been such an eye-opening experience,” AlJeeb told JNS. “It’s really wonderful to build a cultural bridge of understanding. I honestly never thought this opportunity could have come in my lifetime. It’s been wonderful so far. I’m grateful.” 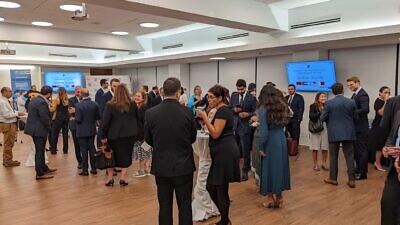 Leaders of Tomorrow program participants mingle at the Israeli embassy in the U.S. capital, Sept. 15, 2022. Courtesy of the Israeli Embassy in Washington.

An opportunity for long-term cooperation

The delegation met Thursday evening at the Israeli embassy in Washington with diplomats from the Abraham Accords countries, Egypt and Jordan, sharing their stories and views of the trip.

“I think that this is exactly what we tried to do here, to build bridges, and to build an opportunity for long-term collaboration between the people,” Eyal Biram, Israel-is CEO, told attendees. “Agreements are signed by governments but implemented by the people in the countries. In order to do so, we created the Leaders of Tomorrow initiative, and we are very glad to stand here and to feel the emotions in this room.”