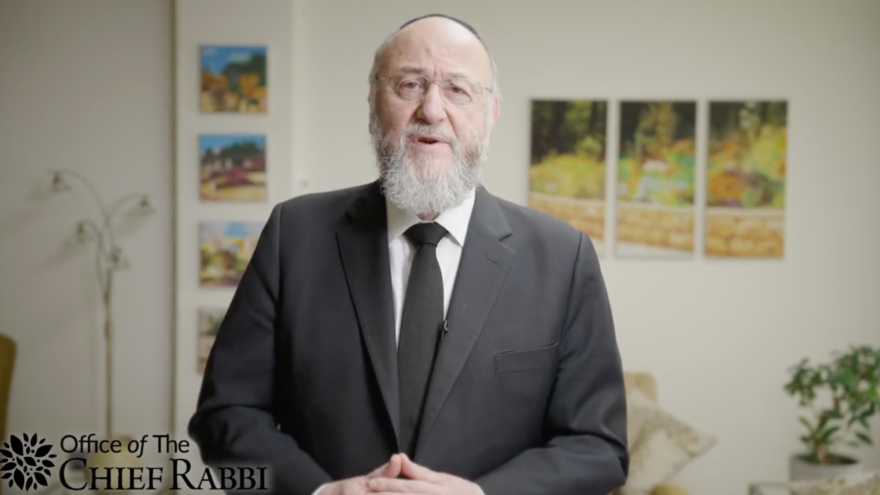 (January 1, 2023 / JNS) United Kingdom Chief Rabbi Ephraim Mirvis was appointed Knight Commander of the Order of the British Empire in the 2023 New Year Honors, according to a statement released Friday by the U.K. cabinet office.

Mirvis was given the designation by King Charles III in recognition of his “significant services to the Jewish community, to interfaith relations and to education.”

“I am enormously honored and deeply humbled by this award,” Mirvis said in a statement, adding: “It will be particularly moving for me to receive this award from his majesty the king in his first year as our monarch.”

The announcement noted that Mirvis has been chief rabbi of the United Hebrew Congregations of the Commonwealth since 2013 and a “pioneer” of interfaith activity, initiating Jewish-Muslim community engagement projects and creating the In Good Faith program in partnership with Archbishop of Canterbury Justin Welby.

Mirvis “addresses global events with his vision of a ‘Judaism of Responsibility’ intervening, for example, on the plight of Uyghur Muslims, the only such intervention by a global faith leader. He has been an advocate for greater inclusivity in Orthodox Jewish life, appointing Britain’s first female halachic adviser and establishing greater opportunities for female leadership and scholarship,” the statement said.

“In the field of education, the chief rabbi has championed the cause of faith schools and Jewish education and issued a guide on the well-being of LGBT+ pupils in Orthodox Jewish schools—the first of its kind anywhere in the world,” it added.

The 2023 honors list was the first approved by Charles following the death of Queen Elizabeth II in September.

At the time, Mirvis released a video message praising the queen, whom he said “embodied the most noble values of British society.

“Throughout her extraordinary reign, she conducted herself with grace, dignity and humility and was a global role model for distinguished leadership and selfless devotion to society. In an ever-changing world, she was a rock of stability and a champion of timeless values,” he added. “Every week in synagogue we have prayed for her welfare, well-being and wisdom, and she never let us down.”

The Johannesburg-born Mirvis moved to Israel in 1973 and studied at Yeshivat Kerem B’Yavneh and Yeshivat Har Etzion in Alon Shvut in Gush Etzion. He then studied at Machon Ariel in Jerusalem from 1978 to 1980 and received his rabbinic ordination there.

As chief rabbi of Ireland and before the opening of an Israeli embassy in the country, he represented Israel’s interests at the government level and in the media.