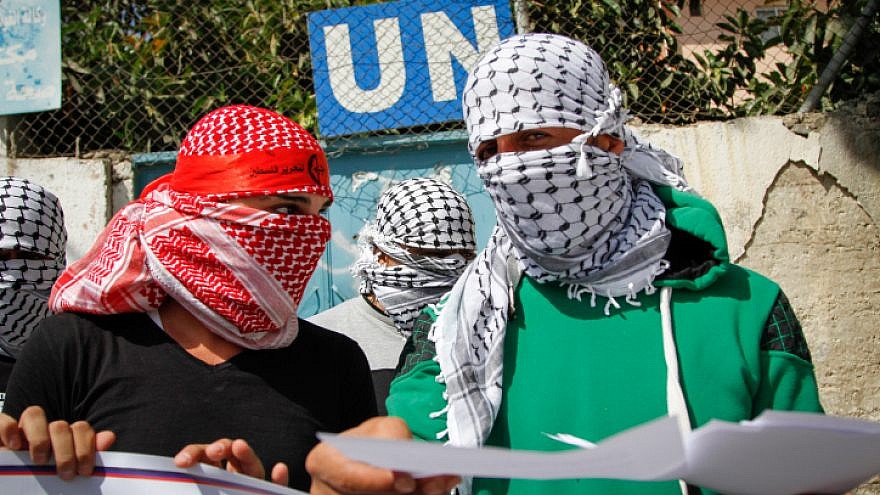 Masked Palestinians demonstrate in the Balata refugee camp in protest against the policy of Scott Anderson, director of UNRWA in the West Bank, on Sept. 17, 2017. Photo by Nasser Ishtayeh/Flash90.
Spread the word.
Help JNS grow!
Share now:

(December 1, 2022 / JNS) The United Nations Relief and Works Agency on Wednesday condemned the presence of a “man-made cavity” found beneath a school in the Hamas-ruled Gaza Strip.

The agency said in a statement that after “recently” identifying the cavity, it had protested strongly to the relevant authorities in Gaza to “express outrage and condemnation.” The structure, UNRWA continued, “is a serious violation of the agency’s neutrality and a breach of international law. Moreover, it exposes children and agency staff to significant security and safety risks.”

The U.N. agency, which tends to some 5 million descendants of Arabs displaced in Israel’s 1948 War of Independence, added that it had sealed the “cavity.”

UNRWA did not disclose the exact nature of the discovery.

Hamas has long been known to build and store terrorist infrastructure in, around and under schools, hospitals, mosques and other civilian infrastructure in Gaza, to shield its assets from Israeli strikes and from which to launch missile attacks against Israeli population centers.

The Palestinian terrorist group has also built a vast network of subterranean tunnels in the enclave through which it smuggles weapons and sends fighters to attack and kidnap Israelis.

In July, The Israel Defense Forces exposed a number of Hamas tunnels under civilian sites in the Gaza Strip, including one in the Tafah area of Gaza City next to a franchised Pepsi bottling factory, and another running next to an UNRWA elementary school that acts as a shelter for some 2,500 people.

The tunnels pass under “buildings that are essential for civilian life, in the knowledge that a strike on those targets will be provocative. If the tunnels collapse, hospitals, mosques, universities, or factories will collapse with them,” said the IDF.

A weapons storehouse and the entrance to a tunnel were also found in the homes of two Hamas operatives, said the IDF. One of the homes is located next to an UNRWA medical clinic which serves some 15,000 people in the area, according to the military.

In June, the director of NGO U.N. Watch criticized UNRWA for its failure to dismiss educators the Geneva-based NGO claims have engaged in anti-Semitic incitement.

U.N. Watch had exposed more than 120 UNRWA teachers and other staff who “praise Hitler, glorify terrorism and spread anti-Semitism,” said Hillel Neuer, yet UNRWA had not named a single one who has been fired.