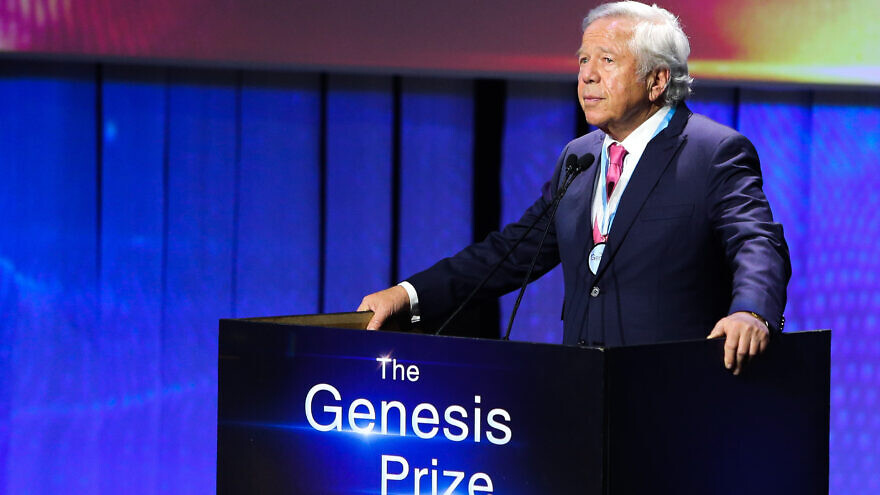 (October 31, 2022 / JNS) Robert Kraft, the owner of the New England Patriots football team, and his family are set to receive a national leadership award on Tuesday for their support of the U.S. Holocaust Memorial Museum. The award will be presented during the museum’s “What you do matters” 2022 Northeast Tribute Dinner.

The honor comes just days after a TV ad urging Americans to stand up against Jew-hatred aired during Sunday’s NFL game between the Patriots and the New York Jets. The ad was sponsored by the Foundation to Combat Antisemitism, which Kraft founded in 2019 to address the threat anti-Semitism poses to the Jewish people.

In a statement announcing the TV ad, Kraft said, “We must do more to make people aware that anti-Semitism is a growing threat against Jews on social media and in communities across the country. I have committed tremendous resources toward this effort and am vowing to do more. I encourage others to join in these efforts. My hope is this commercial will continue to enhance the national conversation about the need to speak out against hatred of all types, and particularly to stand up to Jewish hate.”

The 30-second ad spot says in part, “There are less than 8 million Jewish people in this country. Fewer than are watching this game. They need you to add your voice.” It ends with the hashtag, #StandUptoJewishHate.

The airing of the ad came a day after some projected the words “Kayne is right about the Jews” on the side of the TIAA Bank Field in Jacksonville, Fla., where a college football game between the University of Florida and the University of Georgia was being played. The statement referred to rapper Kayne West, who goes by Ye, and who has been peddling anti-Semitic tropes, including the canard that Jews run the media.

It also comes as Brooklyn Nets basketball star Kyrie Irving has come under fire for linking an anti-Semitic movie on his Twitter page. Irving has been criticized for his actions, including by the owner of the Nets, Joe Tsai, who tweeted, “I’m disappointed that Kyrie appears to support a film based on a book full of anti-Semitic disinformation. I want to sit down and make sure he understands this is hurtful to all of us, and as a man of faith, it is wrong to promote hate based on race, ethnicity or religion.”

Tsai also tweeted, “This is bigger than basketball.”

As for the U.S. Holocaust Memorial Museum, its mission has never been more important, say supporters.

“Today, we have an alarming decline in history education, at a moment when our country faces many challenges and divisions,” museum Director Sara J. Bloomfield said in a statement. “Reaching across these divides and reaching young people have never been harder, or more important. We urgently need trusted institutions, historical perspective, a responsibly engaged citizenry and moral anchors. That’s what the United States Holocaust Memorial Museum is uniquely positioned to do.”

She added, “That’s what in our next 30 years, we must do: Protect truth, unlock the power of Holocaust history and ensure its relevance to new generations.”