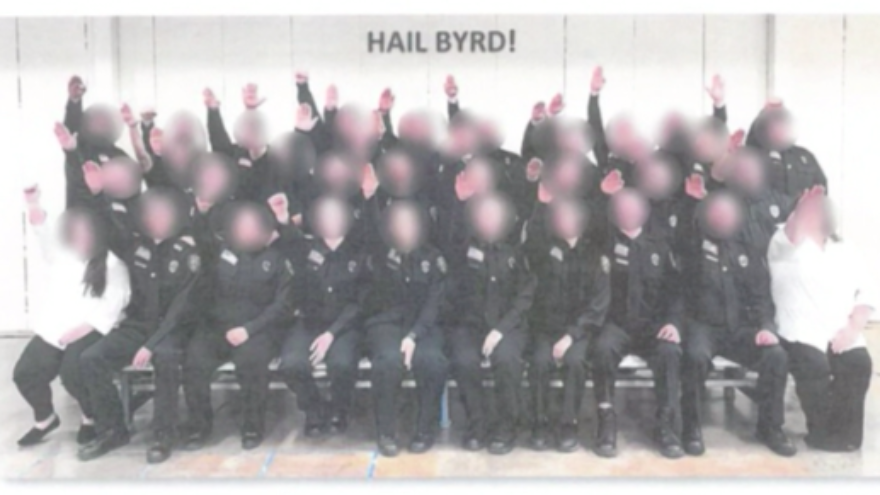 More than 30 West Virginia corrections’ workers and cadets have been fired after a photo surfaced of them performing a Nazi salute. Source: Screenshot.
Spread the word.
Help JNS grow!
Share now:

(December 9, 2019 / JNS) Three West Virginia corrections’ workers have been fired and 34 others have been suspended without pay for performing a Nazi salute after a photo surfaced showing more than 30 students in a basic-training class doing so.

West Virginia Department of Military Affairs and Public Safety (DMAPS) Secretary Jeff Sandy said in a statement on Friday that two correctional academy trainers and a cadet from the Basic Training Class #18 shown in the picture were terminated.

The firings and suspensions were the result of an investigation, almost finished, “that included more than 50 interviews with people at the DMAPS training facility in Glenville and other offices,” reported The Washington Post, citing Sandy.

“As terrible as this incident has been, it is critically important that we go by the book to arrive at the whole truth of what occurred and why,” said Sandy.

“I condemn the photo of Basic Training Class #18 in the strongest possible terms,” he told The Washington Post on Thursday. “I have directed Secretary Jeff Sandy of the Department of Military Affairs and Public Safety [DMAPS] to continue actively investigating this incident, and I have ordered the termination of all those that are found to be involved in this conduct.”

The governor was briefed on the incident by Sandy, who first addressed the incident in a letter to corrections employees on Wednesday.

“It is distasteful, hurtful, disturbing, highly insensitive and completely inappropriate,” Sandy wrote in a memo obtained by the Post. “It betrays the professionalism I have seen time and time again displayed and practiced by our brave correctional employees.”

Sandy didn’t mention when or how he knew about the photo.

The photo blurred the faces of the participants of the class, which took place from Oct. 21 to Nov. 27. Names of the employees are not identified.

A caption on the photo reads “Hail Byrd!” DMAPS spokesperson Lawrence Messina told the Post that Byrd is a training instructor.