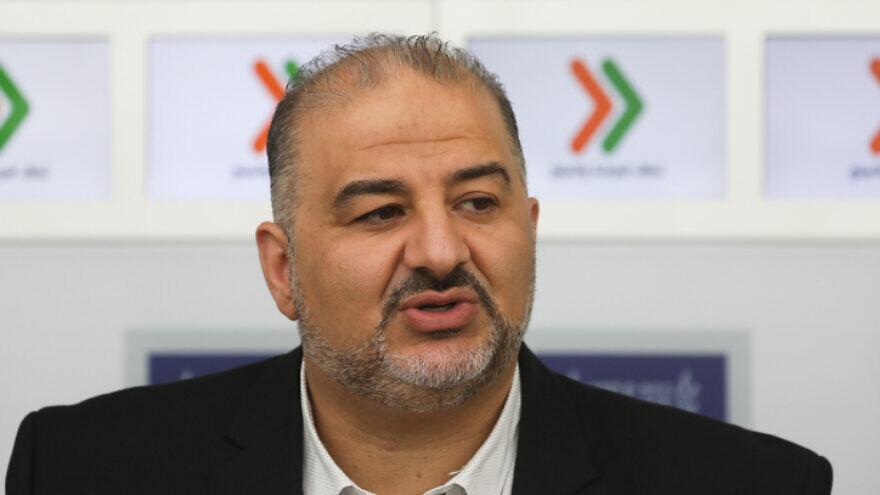 Abbas, the head of the United Arab List (also known by its Hebrew acronym, Ra’am) Party—the political branch of the southern branch of the Islamic Movement—criticized the Joint List in an Israeli TV interview last month for not working to help Arab society enough.

So why is a politician from the offshoot of the Muslim Brotherhood, which seeks to Islamize Israeli Arabs and in the long term transform Israel into an Islamic state, seeking cooperation with a right-wing government?

“Mansour Abbas is aware of the feelings in the Arab public and probably sensed there is economic distress because of the coronavirus crisis,” Arik Rudnitzky, of the Israel Democracy Institute and Tel Aviv University’s Moshe Dayan Center, told JNS.

Indeed, the Arab community in Israel faces a number of pressing economic and community issues.

A new survey of Israeli Arabs found concern about the difficult economic situation caused by the coronavirus. It also showed that many Arabs are disappointed with the Arab MKs. And it reported that most Arabs support the normalization agreements between Israel and the Gulf states, and more, recently, Sudan, Bhutan and Morocco.

The survey was published on Dec. 6 by the Konrad Adenauer Program for Jewish-Arab Cooperation at the Moshe Dayan Center for Middle Eastern and African Studies at Tel Aviv University.

A vast majority (64.8 percent) support the agreements with other countries, and 61.6 percent say the economic situation has deteriorated because of the ongoing pandemic.

But the most important issue, according to the survey, is violence in Israeli Arab communities (51.9 percent).

Abbas confirmed to Israel Hayom earlier this month that he had met with officials of the Prime Minister’s Office with the aim of “promoting the government plan to benefit the Arab sector. This is a plan that is spread out across five years and costs some 500 million shekels (about $150 million) a year. That is what matters right now to the Arab public, not petty politics.”

As such, it can be seen that Abbas’s warming to Netanyahu comes in reaction to recent events and his sense that Arab public opinion is shifting. Abbas’s Ra’am Party as part of the southern branch of the Islamic Movement is known for its pragmatism, not moderation, and like other Islamist groups in the West is willing to play the game and participate in the political process to advance its influence and power.

This is unlike more radical and impatient Islamist groups, such as the northern branch of the Islamic Movement in Israel or Hamas in Gaza, which resort to violence and incitement even though it causes the Israeli security authorities to combat them aggressively.

Jihadist groups such as Al-Qaeda and Islamic State are even less realistic, advocating immediate and continuous war against their enemies without truce or acquiescence.

‘Continuing to scream at government not achieving anything’

Abbas concluded that “the Arab parties’ relationship with the government was dysfunctional and not in the interest of the Arab public.”

Veteran Arab political observer Shaheen Sarsour told JNS, “Balad and the Hadash parties are always criticizing the government, Netanyahu and the state by accusing them of racism.”

“But Mansour read the political map and decided to make a move that no other Arab politician has made in order to achieve accomplishments for the Arab public, such as in the fight against violence in their towns and in the issue of expanding the area available for public housing.”

He added that “the continuation of the status quo and continuing to scream at the government was not achieving anything.”

Even though the Arab Joint List has 15 members in the Knesset, “it does not influence the government. Mansour Abbas’s move was meant to change that,” assessed Sarsour.

This shift of warming to Netanyahu’s government is sure to grab the attention of Israeli-Arab voters looking for result-oriented politicians to represent them and may lead to a better showing for his party in the next national elections, scheduled for March 23, if a new budget deal is not reached by next week.

However, there are no signs yet that the Joint List of parties made up of Ra’am, the Communist Hadash, Ahmad Tibi’s Ta’al and the Pan-Arab Balad will break up.

Recent polling suggests that the Joint List would lose a few seats from its current 15 and that its breakup could mean that some of the parties would not pass the threshold to make it into the Knesset if they ran separately.

It is conceivable, however, that Ra’am runs alone while the other three parties would remain in the Joint List.

Either way, Abbas has upended the status quo and has placed himself as a possible kingmaker, already siding earlier this month with the Likud against dissolving the Knesset.

Therefore, the shift cannot be explained on ideological grounds or due to any real change on principles, but as a tactical move meant to ride the wave of current opinion on the Arab street that calls for real results, not angry slogans.