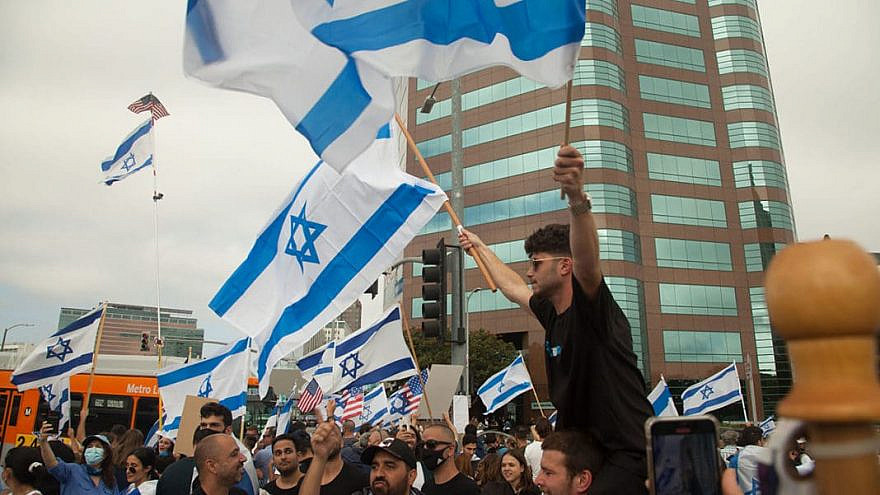 Pro-Israel demonstrators in front of the Federal Building in Los Angeles on May 12, 2021. Photo by Harvey Farr.
Spread the word.
Help JNS grow!
Share now:

(May 13, 2021 / Jewish Journal) More than 600 pro-Israel demonstrators gathered on Wednesday at the Federal Building in Los Angeles to show their support for Israel in the midst of the worst Israel-Palestinian confrontation since 2014. The rally was one of 18 held simultaneously across the United States.

The rally drew people from all parts of Southern California who gathered to show their support for Israel and voice concern for what many see as Israel under siege from Hamas in the Gaza Strip. In the past four days, more than 1,300 rockets have been launched by Hamas and Palestinian Islamic Jihad into Israel.

“We need to be more proactive, not reactive. We should be showing up in every situation,” said Guy Bachar, chairman of the IAC Los Angeles Council. “We can’t be quiet because we won’t be able to walk down the street with a kippah. We are here for Israel’s right to defend itself. We are here to say no to terror. We will stand united in support of Israel.”

Added Roz Rothstein, CEO of StandWithUs, “Ever since Hamas took over they have used Gaza as a launching pad to terrorize Israeli civilians and this has to stop. They are missing an opportunity to build a beautiful state. Instead, they have to destroy Israel.” 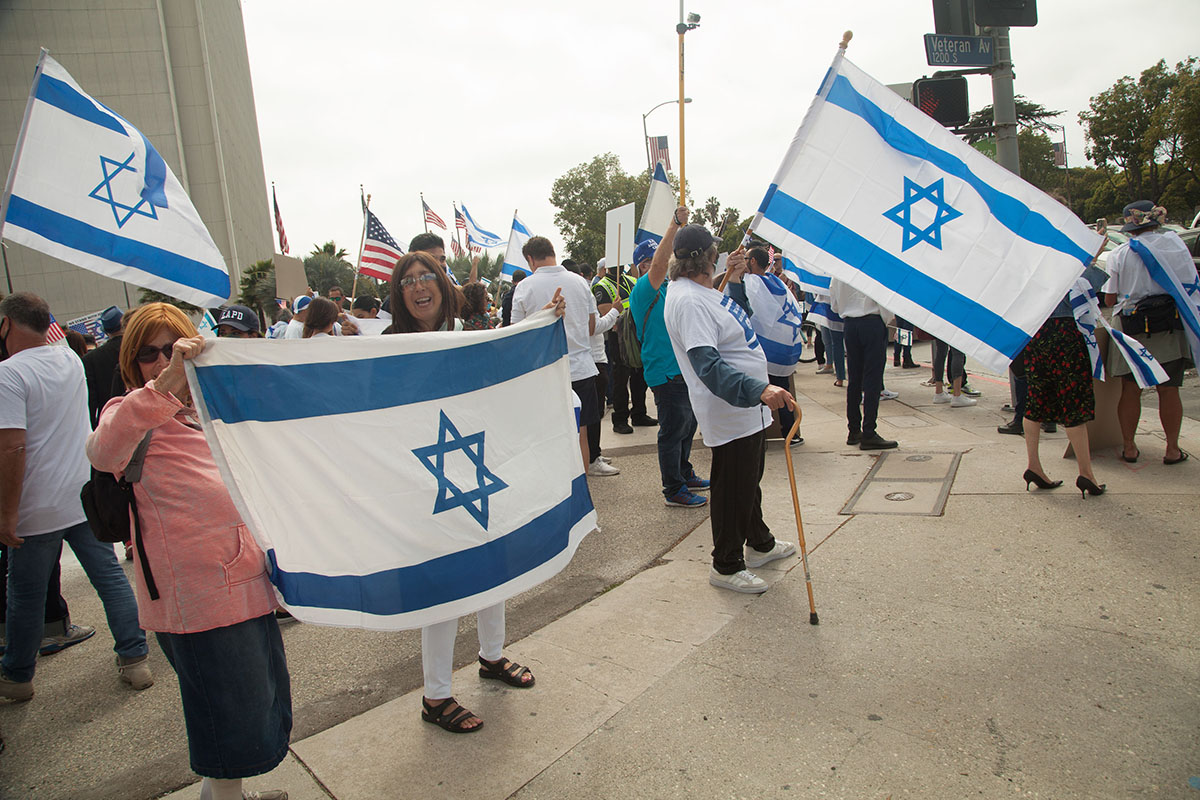 Pro-Israel demonstrators in front of the Federal Building in Los Angeles on May 12, 2021. Photo by Harvey Farr.

Demonstrators ranged widely in age, with each expressing similar reasons for attending the rally.

Galina Blank, 50, attended to “show my unwavering support for Israel … she [Israel] is not alone.  We are with her and will support her until the end.”

A group of students from Sinai Akiba Academy was present, holding and waving Israeli flags. “I just want to support Israel. My family lives there, my parents grew up there and it’s been really scary with my cousins stuck in shelters,” said Tamar Koren, 11. “My grandfather told me he was across the street when a bomb went off.”

Echoing Tamar’s sentiments, fellow student Ido Shalev, 12, said, “I am here to protest and stand with my country. I don’t think what Hamas is doing is right. They are firing rockets into the heart of Israel. I am here to assure that the United States stands by Israel as its big brother.”

Los Angeles resident Yehuda Jian, 20, added: “I am here to support Israel, where my parents grew up and where I want to live one day. We’re under attack and everybody needs to know that.”

Amid the cacophony of honking horns, waving of Israeli and American flags, loud Israeli music, dancing and singing, the crowd was united in its show of support and solidarity for Israel.

The crowd filled the front of the corner of Wilshire Boulevard and Veteran Avenue, where the Federal Building is located. At one point a number of flag-waving protestors poured onto adjacent corners but were soon escorted back to the Federal Building.  No counter-protesters were seen or Palestinian flags waved from the many passing cars on Wilshire Blvd.