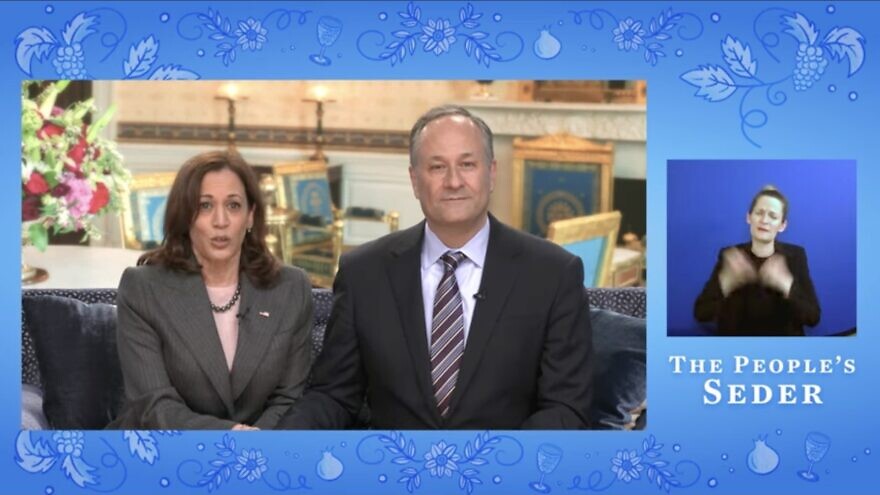 (April 15, 2022 / JNS) The Biden administration held a virtual White House Passover seder on Thursday for the second year in a row. Calling it the “The People’s Seder,” it was streamed on the White House YouTube page.

Jewish second gentleman Doug Emhoff started off the list of administration officials, reflecting on what Passover means to him and his family.

“Ever since I was a kid, I’ve been inspired by the story of Exodus, whose retelling serves as the heart of our Seder experience. And I know I’m not alone,” said Emhoff. “Generations of my ancestors and many of yours have turned to the redemptive promise of the Passover narrative as a source of hope. To endure prejudice, persecution and pogroms. To survive expulsions and to seek emancipation. To believe in a possibility of a promised land and to know it’s not beyond your reach.”

U.S. President Joe Biden and first lady Jill Biden appeared together in a video, with Biden noting that thanks to the progress made during the pandemic, “this year’s Passover marks the first time in three years that many families and friends sit around the Seder table together again.”

The war in Ukraine was a recurring topic for many of the speakers starting with Emhoff and the president.

“During this holiday, our hearts [are with] the people of Ukraine and all the people who are fighting for freedom,” said Biden. “May the spirit of Passover—deliverance from oppression—carry you forward and give you strength.”

The virtual seder was the first time that Ambassador Deborah Lipstadt, Special Envoy to Monitor and Combat Anti-Semitism, has delivered remarks since her confirmation on March 30.

She said, just like the Passover matzah, the world is always in some form of balance between wholeness and brokenness.

“This past month, it has been terribly broken. All around us we see pain, suffering, killings, attacks on children and civilians. And so many of us individually are broken in ways that are invisible to others,” said Lipstadt.

She noted that her position is made necessary by the brokenness of the world, anti-Semitism. While she said she will not be able to repair that brokenness, she prays that next year for the next seder, her work would have made the world “a little bit less shattered, less broken.”

“The matzah we break cannot be repaired, the world we inhabit can be repaired. It is in our hands to do so,” she said.

Actress and “Jeopardy!” host Mayim Bialik introduced the “Four Questions,” which were recited by children from the Shefa School, a New York-based day school for students with language-based disabilities.

“We’re at a time in history yet again where the story of exile and exodus is upon us as the world watches a war play out in Ukraine, a country where many of my own ancestors and many of our ancestors fled just a few generations ago,” said Bialik.

“They say every Jewish question has several answers, and I guess as host of ‘Jeopardy!’, I know a lot about questions and also a lot about responses. … There are many questions to be asked about our global as well as communal responsibility to the people of Ukraine and the people of all nations who still suffer and are not free. Suffice it to say the lessons of the Seder and the struggle for freedom, which Passover embodies, are as true now as they were thousands of years ago when our people fled oppression in the hopes of something better.”

Vice President Kamala Harris, joined by Emhoff, closed the ceremony together, with Harris saying that she and her husband will host Jewish White House staffers for Passover seder at their home on Friday.

“We believe it will be the first Passover seder ever hosted at the vice president’s residence,” she said, ending her statements with “next year in Jerusalem.”