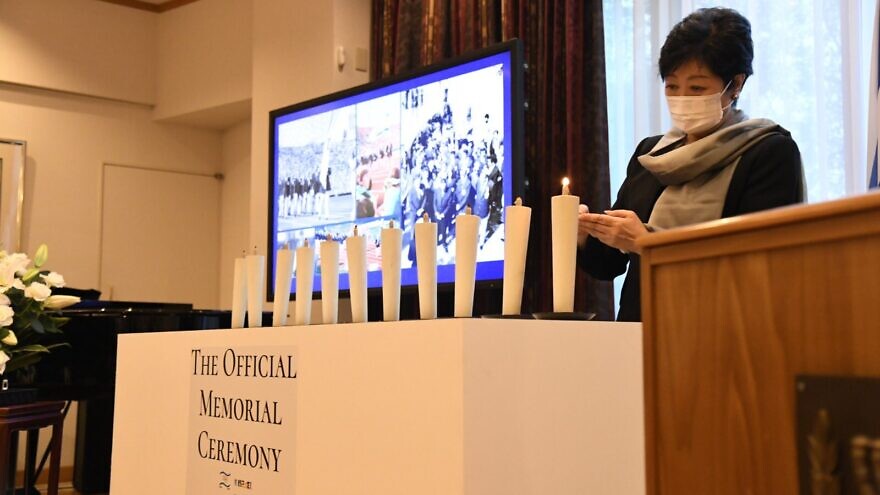 The governor of Tokyo, Yuriko Koike, lights candles in honor of the 11 Israeli athletes murdered at the 1972 Munich Olympics at a memorial ceremony on Aug. 1, 2021. Source: Israel in Japan/Twitter.
Spread the word.
Help JNS grow!
Share now:

(August 3, 2021 / JNS) An official memorial ceremony was held in Tokyo for the Israeli Olympic athletes who were murdered by Palestinian terrorists at the 1972 Munich Olympics.

The event took place at Israel’s embassy in Japan on Sunday. Among those who attended were the governor of Tokyo, Yuriko Koike; family members of the 11 victims; and Thomas Bach, president of the International Olympic Committee (IOC).

It took place days after the opening ceremony of the Olympics on July 23, when a moment of silence was held for the first time ever for those who were killed in the attack by the Black September Palestinian terror group.

At the Aug. 1 memorial, Ankie Spitzer, the widow of murdered Israeli fencing coach Andre Spitzer, thanked Bach for the recognition. She said it was a “glorious moment” to “finally realize that our 11 loved ones were recognized as members of the Olympic family—that they were no longer ignored because they were Jews and Israelis.”

“Sometimes, it only takes one man to make a difference,” she added. “Our deep wounds of the Munich Olympics will never heal, but life looks different today—much brighter and hopeful.”

Bach said at the memorial: “We know that no ceremony and no memory can ever fill the void left by those whose lives were taken so violently. With these acts of remembrance, we wanted to honor their memory, while also attempting to close the wounds of the past.”

Numerous campaigns over the years called on the IOC to publicly recognize and pay tribute to the victims of the Munich massacre. In 2016, a memorial ceremony was held for the first time during the Rio Games, but not as part of the opening ceremony.