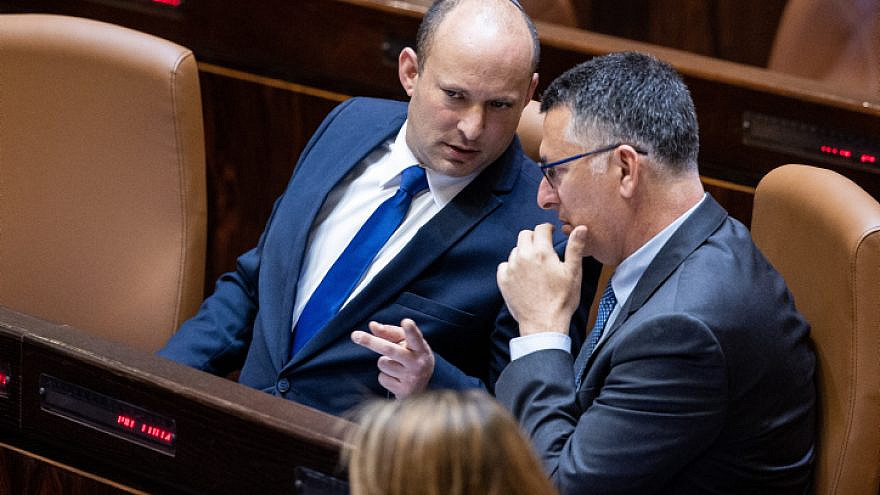 The coalition built by these two leaders is Israel’s most diverse ever and includes members of Knesset from the right-wing, center and left, and for the first time in Israel’s history, Israeli Arabs as well.

The “change” government is technically headed by Yesh Atid as it secured 17 seats—the most out of any coalition party in Israel’s recent election.

Along with a document of key governing principles composed by Bennett and Lapid, Yesh Atid had to sign separate coalition agreements with each party individually, documenting their backing of each respective party’s desired national policy changes on some of the most contentious issues in Israeli society in recent years.

Some of the major policy topics include issues of religion and state; the drafting of the haredi community into the army, which includes paving a path for them to join the workforce; and Israel’s policies when it comes to building in “Area C” of Judea and Samaria.

Yohanan Plesner, president of the Israel Democracy Institute, told JNS that “if this government is to succeed, it’ll have to adopt the 70-30 rule. Focus on the 70 percent of issues that all the parties agree to while pushing off the 30 percent where there is strong disagreement. To make any progress on the 30 percent of issues where there is strong disagreement, complete unanimity will be needed among all the coalition partners.”

He said that the 30 percent “includes most long-term foreign-policy questions, as well as the most difficult issues relating to religion and state.”

In regard to religion and state, Plesner explained that “the only coalition agreement that is binding is the one between Yamina and Yesh Atid. That agreement specifies that changes to almost all areas relating to religion and state must be done with the full agreement of all the coalition partners. This means that we are unlikely to see major changes when it comes to the current status quo.”

Plesner added that “the only areas where all the government members are in agreement are to alter the voting body for the Chief Rabbinate with the hopes of increasing the chances of Zionistic candidates for these positions, allowing municipal Orthodox Rabbinate officials to conduct conversions and to open up the kashrut market to more competition.”

Rabbi David Stav, founder and chair of the Tzohar Rabbinical Organization, is hopeful that since the new government is in agreement on these three areas of religion and state, change is on the way.

He told JNS that he believes Zionistic candidates should have opportunities to be part of the Chief Rabbinate. “Elections should represent the diversity of society of the Jewish people in Israel,” he said. Stav thinks that the current arrangement doesn’t truly reflect Israeli society, with haredi parties dominating the Chief Rabbinate, while that population is only composed of 12 percent of the population.

He would also like to see the allowance of conversions being carried out on a regional and municipal level, albeit, of course, according to Jewish law. “We would like conversions to be more inclusive—that doesn’t mean less halachic, but part of the process is to make sure the convert is being treated in the proper way,” which he believes could happen under the government plan.

In regard to opening up the kashrut market, it was Tzohar, said Stav, who launched the idea of alternative kashrut certification in order to create completion. “Monopolies corrupt; they give people control without responsibility. Therefore, what is urgently needed are alternative certifications, like we (Tzohar) are giving, in order to create a revolution in this area.”

Stav also commented on one of the other bullet points mentioned in the coalition agreement, which calls on the new government to implement the currently frozen “Western Wall Plan,” allowing for the expansion and accessibility of the southern section of the Western Wall Plaza earmarked for egalitarian prayer services.

“The egalitarian section has existed for years, and the government (in 2016) already approved the renovation, but it’s all about politics, and a few very right-winged politicians stopped it.”

At the same time, he explained that originally, while there were those against the entire concept of the egalitarian section, there were those on the other side who wanted to make the entire Western Wall egalitarian. “But a normal compromise was made. Implementing the plan is a sign of good intention from the new government,” said Stav.

On the topic of haredi inscription in the Israel Defense Forces, Yisrael Beiteinu Finance Minister Avigdor Lieberman has historically staunchly called for drafting members of that community. In a related move, one of his coalition stipulations calls on the State to enforce a mandatory core curriculum in all state-funded schools, so that the ultra-orthodox community has the tools to join the workforce.

Plesner explained that “all sides have agreed to adopt the Defense Ministry plan that ostensibly led to this political crisis back in 2018. This would mean promoting equality by establishing higher conscription targets for the ultra-Orthodox community over the coming years, but also allowing those over 21 who did not serve to enter the workforce instead of forcing them to remain in yeshivah with government stipends.”

Finally, when it comes to the situation in “Area C” of Judea and Samaria, part of the Bennett/Lapid document calls for the ensuring of Israel’s national interests in that area while strengthening enforcement against illegal construction and takeover of land.

However, some are not convinced.

Naomi Kahn, director of the international division at Regavim, a research-based think tank and lobbying group dedicated to preserving Israel’s resources and sovereignty, told JNS, “We anticipated that the government would create a specialized directorate to protect the open spaces of ‘Area C,’ not under the auspicious of the Ministry of Defense. The Ministry of Defense—i.e., the Civil Administration—is not equipped to do the job and doesn’t see the job the same way as the rest of the government sees it. The Civil Administration has proven that it works together with the Palestinians for Palestinian interests, and does not see itself as a guardian of Israeli interests.”

She added, “By taking the oversight over open spaces still left in ‘Area C’ out of the hands of the Civil Administration and creating a centralized unit—something like the Green Police [an arm of the Environmental Protection Ministry]–that would protect the open spaces as open spaces.”

“So yes, we are in favor of more inspectors and enforcement, and more oversight. Yamina said it would insist on a new directorate to protect Israel’s interest in ’Area C,’ but they folded.”

When it comes to the New Hope Party platform indicating that the government will clamp down on illegal Arab construction there, Kahn said, “we’re all for it. The tools exist, but it’s a question of political will. I don’t know how that’s going to work under the current constellation.”