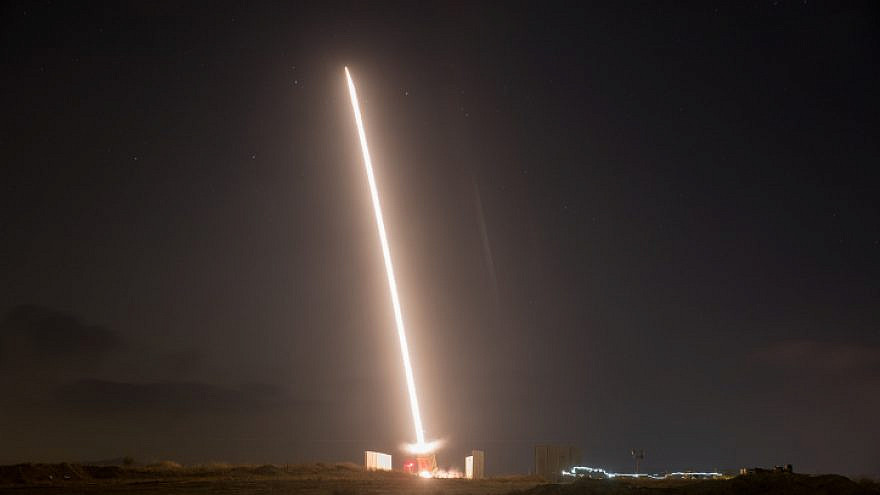 (February 1, 2022 / JNS) The Iranian-backed Houthi rocket that hurtled over the United Arab Emirates’ skies while Israeli President Isaac Herzog slept below could now spawn a quick Israeli decision to help the UAE with its missile defense capabilities.

The missile strike, the third in less than 30 days, was intercepted, but experts told JNS it is likely to further escalate tensions in the region, dragging Israel further into the Gulf crisis.

Security cooperation was clearly on Herzog’s mind during his first official visit, which ended Monday evening, as he raised the issue with Crown Prince of Abu Dhabi, Sheikh Mohammed bin Zayed Al Nahyan.

“I wish to emphasize that we completely support your security requirements, and we condemn in all forms and language any attack on your sovereignty by terrorist groups,” Herzog told the crown prince. “We are here together to find ways and means to bring full security to people who seek peace in our region.”

For years, defense and national security specialists have talked about some kind of missile cooperation among the Gulf countries, but at least on the surface, this has never come to fruition. In light of the 2020 Abraham Accords and in the shadow of increasing radicalization in Yemen, now could be the time for Israel to share its missile defense expertise with friendly countries, said professor Joshua Teitelbaum of Bar-Ilan University’s Department of Middle Eastern Studies.

“It would be a dividend for the UAE,” said Teitelbaum. “They have talked in the past about buying the Iron Dome. For Israel, the move would certainly widen the appeal of other countries in the region to cooperate with Israel.”

“I find it likely that Israel would be interested in selling the Iron Dome to the UAE,” said Moran Zaga, a Haifa University researcher and Mitvim fellow. “The UAE’s stability is equal to Israel’s stability at this moment in time” and for Israel could prove not only strategic but essential.

At the same time, the UAE is likely eager for help.

The UAE has already signed a contract for South Korea’s mid-range surface-to-air missile system (M-SAM), which is designed to intercept missiles at ranges of up to 40 kilometers (25 miles) at an altitude of up to 15 kilometers (9.3 miles). The Iron Dome, for example, is designed to intercept a variety of short-range rockets, mortars and artillery at a range of four kilometers (2.5 miles) to 70 kilometers (43 miles). According to Zaga, the Iron Dome offers significantly different ranges, so one purchase does not necessarily preclude the other.

The recent attacks are threatening to upend the very uniqueness of the country—its tolerance and safety. The Houthis’ strikes have put residents and tourists on high alert. The United States last week warned against travel to the UAE, partly because of the security threat.

“The UAE is trying to show itself as religiously tolerant, modern and open for tourism,” said Teitelbaum. “If the Houthis are able to put down drones and missiles close to these tourist sites, it is going to be quite a challenge to the UAE.”

The Houthis, backed by Iran, know exactly what they are doing, according to experts.

For starters, they are sending a message to the UAE, which withdrew its actual forces from Yemen in 2019 but has continued to fight the rebels as part of a military coalition led by Saudi Arabia.

“The Houthis are demonstrating that the UAE is not immune and there is a price to pay for its continued involvement,” said Teitelbaum. “They are also saying to the Saudis and the Americans that the situation in Yemen is not going to end quickly and to their satisfaction.”

Though the Houthis are not acting alone.

When Israel decided to make peace with the UAE, it was because there is a common interest, explained Ronni Shaked, a researcher in the Middle East Unit at the Harry S. Truman Research Institute for the Advancement of Peace at Hebrew University. “That common interest is Iran.”

According to Shaked, while Iran is not directly attacking Israel or the Emirates because it does not want an all-out war across the Middle East, the country is strategically and effectively using its proxy powers like Hezbollah, Hamas, Palestinian Islamic Jihad, and—what has become in the last year its most dangerous proxy—the Houthis in Yemen.

“Yemen has become a base of Iran, and the Iranians are acting in Yemen in the name of the Houthis,” Shaked told JNS, explaining that the recent attacks against the UAE could not have been achieved without sophisticated long-range missiles operated by skilled technicians.

“It is hard to believe that the Houthis, who are still fighting like Islamic State, can do something like this,” he said.

Furthermore, new evidence has shown that Hezbollah, Hamas, Islamic Jihad and the Houthis are collaborating. Hezbollah and Hamas terrorists have traveled to Yemen for training. About a week ago, there was an Islamic Jihad demonstration in the Gaza Strip in solidarity with the Houthis.

Expert: Israel could be next

The Houthis are deeply anti-Semitic and anti-Israel. Their slogans include statements like “death to the Jews” and “death to the enemies of Islam,” Teitelbaum told JNS.

Zaga said that the Houthis are trying to associate the UAE with Israel through the Abraham Accords.

“You hear more and more statements from Houthi representatives talking about this link between the UAE and Israel,” she said.

Zaga does not believe the accords are at risk, mostly because the UAE understands that if it withdrew from the accords due to the attacks, it would send a message to the terrorist groups that they had won, putting the UAE in greater danger.

However, she does think that if the UAE is forced to negotiate directly with Tehran to get the missiles to stop—as it did in 2019 over maritime security—that could lead to a cooling of relations.

“The temperature of these accords could change according to negotiations with Tehran, negotiations that are already occurring or that likely will be [soon],” Zaga said.

‘Helping the UAE, is helping ourselves’

Even bolder would be for the Houthis to directly attack Israel—something Teitelbaum said he thinks is unlikely to happen, but a threat Shaked said should not be dismissed.

“Iranian missiles can come very close to Israel and even into the center of Israel from Yemen,” Shaked warned. “Today, it is Abu Dhabi; tomorrow, it could be Tel Aviv.”