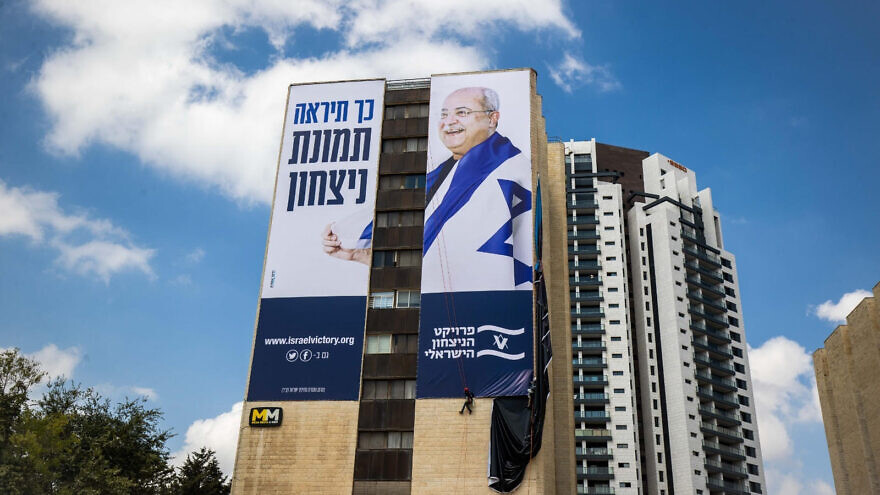 (September 20, 2022, JNS Wire) This morning commuters in Tel Aviv and Jerusalem were greeted by giant billboards hung in central locations throughout the two cities, with an image of controversial Arab Israeli leaders Ahmed Tibi and Ayman Odeh, holding and wrapped in Israeli flags under the caption “This is how a picture of victory will look.”

The billboards are part of a campaign to increase the call for a victory over Arab rejectionism of Jewish sovereignty in Israeli society, and an understanding that the resolution to the conflict will only be possible when the Palestinians and their supporters realize that their over 100-year war against Jewish sovereignty in its indigenous and ancestral homeland has been defeated and they recognize the State of Israel as a Jewish and democratic state.

The campaign is led by the “Israel Victory Project” supported by the Middle East Forum Israel Office, an apolitical organization that brings together Members of Knesset, former senior military officers, former government officials, researchers, NGOs and other decision-makers and opinion-shapers.

The Israel Victory Project calls on Israeli elected officials, senior members of the IDF and general Israeli society, to finally end the conflict by moving away from a policy of concessions towards a policy of decisiveness and victory, and imposing Israel’s conditions on its enemies through military, economic, diplomatic and political means.

“Over the last year, especially after the riots by Arab citizens in mixed Israeli cities during Operation Guardian of the Walls, we witnessed how Palestinian violent rejectionism of Jewish sovereignty has seeped into mainstream Arab sector in Israel, which has directly affected the security and future of the State of Israel,” said Director of the Middle East Forum Gregg Roman. “Many of those who are pouring oil on the fire are Arab Israeli leaders like Tibi and Odeh. They provide impetus to the Palestinian rejectionist narrative, which continues to reject peace. We must realize, Jews and Arabs alike, that the conflict, the violence and the bloodshed, will stop only when they have accepted that the war against Jewish sovereignty has ended, and the State of Israel as a Jewish and democratic state is finally and permanently recognized by all.”

Republish this article
About The Publishers
Israel Victory Project
Publish your organization's press release on JNS Wire
Releases published on the JNS Wire are communicated and paid for by third parties. Jewish News Syndicate, and any of its distribution partners, take zero responsibility for the accuracy of any content published in any press release. All the statements, opinions, figures in text or multimedia including photos or videos included in each release are presented solely by the sponsoring organization, and in no way reflect the views or recommendation of Jewish News Syndicate or any of its partners. If you believe any of the content in a release published on JNS Wire is offensive or abusive, please report a release.
Never miss a thing
Get the best stories faster with JNS breaking news updates