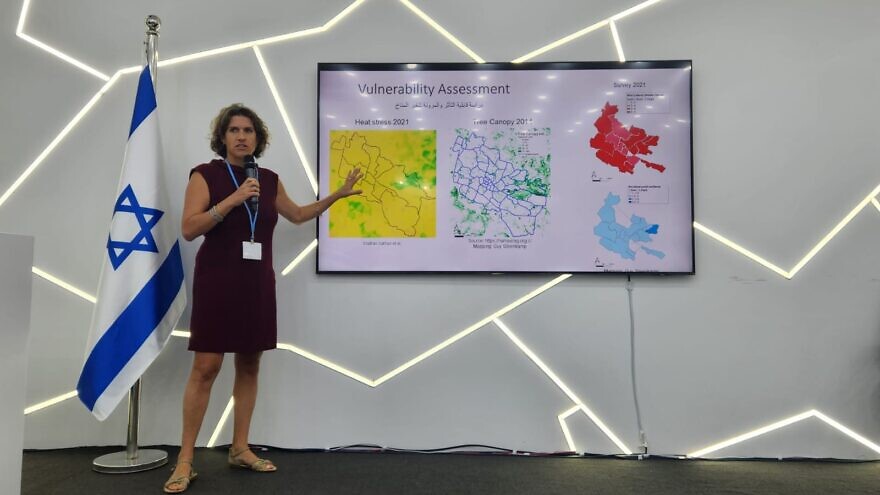 The presentation by Dr. Maya Negev, head of the Health Systems Policy and Administration Program at the University’s School of Public Health, and Prof. Shlomit Paz, head of the school’s Climate and Environmental Sustainability Center, focused on climate-related social vulnerabilities and the risk of extreme heat in Haifa, Israel’s third-largest city and known for its mixed Jewish-Arab population. In addition, Dr. Negev, focused on harnessing professional expertise and localized knowledge for collaborative climate resilience in Shefa-‘Amr. The presentation reflected her study is part of a science-policy society project led by The Galilee Society in collaboration with the University and the local authority of Shefa-‘Amr – an Arab city in Northern Israel. The project represents the first attempt at a climate change adaptation plan for an Arab city in Israel.

“Most of the local authorities in Israel do not have a climate adaptation plan and it is still not a priority locally, but cities are already affected and vulnerable populations are at higher risk,” Dr. Negev explained. “Arab municipalities have the same challenges as Jewish cities but have many other priorities including combating violence and crime . Accordingly, climate change is not on their agenda. However, we believe that adaptation to climate change can be integrated into solving other problems as well. We should work in a participatory manner with residents and municipalities to develop a plan that suits their needs, enhances their capacities and collaboratively builds climate resilience.”

The University of Haifa’s participation in COP27 aligns with the broader goal of the university to make contributions toward achieving the U.N. Sustainable Development Goals, which emphasize tackling climate change. For this purpose, the university’s unique laboratory is the Mediterranean Sea, its coastline, the city of Haifa and the Carmel Mountain, an optimal research setting due to its semi-closed base and its status as one of the most responsive regions to climate change. Its participation in the summit also coincides with its newly established Climate and Environmental Sustainability Center which will lead cutting-edge research activities, academic teaching and environmental involvement in the local communities.

The study on Shefa-‘Amr discovered that in 2021 that climate change has already started to harm the people of the Galilee by whereby some 50% of the population have suffered health consequences due to extreme heat. As such, Dr. Negev recommends integrating health and resilience into the UNFCCC negotiations and policymaking into national climate policies; raise mitigation and adaptation ambitions to co-benefit public health and brainstorm ways to provide financial compensation for those who are victims of climate change.

“Israel is situated in a climate change hotspot. Nations in the Middle East are more exposed than those in many other regions in the world,” Dr. Negev said. “Israel is quite well-adapted to water shortages compared to neighboring countries due to its innovations in the areas of desalination water, drip irrigation, and wastewater treatment and it started utilizing the great potential for solar energy. But there are still significant climate injustice issues in Israeli society. In Haifa, we see people living in poverty who are highly vulnerable to climate change and those in socio-economically peripheral regions including many Jewish and Arab populations are even more vulnerable.”

Meanwhile, the survey conducted in Haifa found that the city’s downtown area is more susceptible to heatwaves and that less affluent areas have gaps in access to the energy resources that would enable them to combat extreme heat by using air conditioners.

Additionally, Dr. Negev noted that poorer cities and neighborhoods in Israel have fewer trees, which serve as protectors against climate change by providing shade, reducing the urban heat and contributing to well-being.

“These cities are more exposed to heat — and heat kills. It is one of the top reasons for climate-related deaths in the world. Additionally, people who can’t exercise or move around their city due to extreme heat are susceptible to suffering health-related consequences such as diabetes and obesity and loneliness,” Dr. Negev said.

As such, the project also raises awareness about climate change among both authority figures and the general public.

“There is a substantial amount of work ahead of us in the realm of climate change education,” Prof. Paz said. “People tend to think that Israel is well-adapted to climate change since many houses have air-conditioned facilities, but the bigger picture is different and more complex than that. People living in poverty, and from minority and immigrant populations are lagging behind. Israel and other countries should pay more attention to such communities.”

As for Prof. Ayalon, her lecture on climate change used the city of Tel Aviv as a template for discussing the implications and cost associated with not properly incorporating adaptation measures to account for the future impact of rising temperatures and heat waves associated with climate warming. The study provided calculated projections for the cost of inaction and predicted that the city will suffer a NIS 2 – 4 billion loss by 2050 if it does not take the matter more seriously. The study came to that conclusion by both top-down analysis addressing loss of the city’s GDP and by tallying up the bottom-up costs of increasing mortality rates, energy consumption, emissions and a decrease in labor productivity as the result of climate warming. The study was funded by the city of Tel Aviv-Jaffa and conducted in cooperation with the Samuel Neaman Institute.

“Evidence provided in literature is alarming. The Middle East and Africa are on a collision course with economic disaster if it continues to dismiss the threats of climate change,” Prof. Ayalon warned.

Republish this article
About The Publishers
American Society of the University of Haifa
Publish your organization's press release on JNS Wire
Releases published on the JNS Wire are communicated and paid for by third parties. Jewish News Syndicate, and any of its distribution partners, take zero responsibility for the accuracy of any content published in any press release. All the statements, opinions, figures in text or multimedia including photos or videos included in each release are presented solely by the sponsoring organization, and in no way reflect the views or recommendation of Jewish News Syndicate or any of its partners. If you believe any of the content in a release published on JNS Wire is offensive or abusive, please report a release.
Never miss a thing
Get the best stories faster with JNS breaking news updates