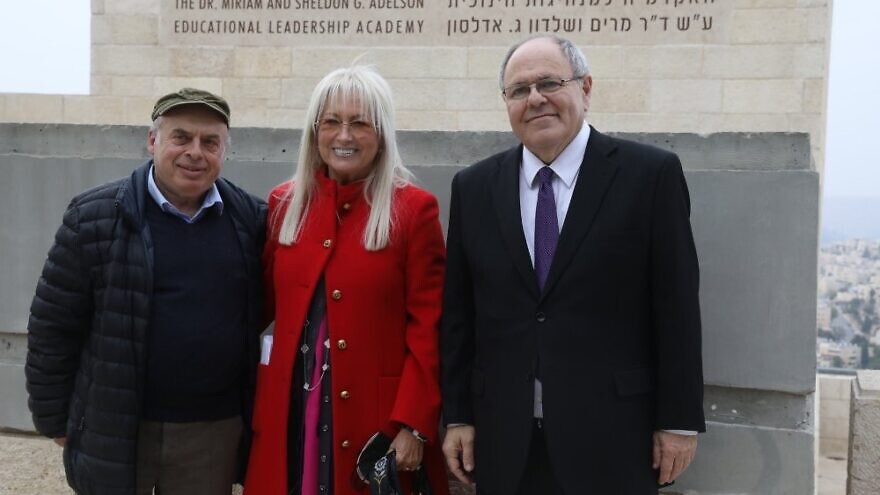 (January 7, 2022 / JNS) One hundred stalwart souls braved the chilling Jerusalem rain and influx of new COVID-19 cases on Jan. 5 to witness the rollout of what is designed to be the next big step for empowering Holocaust awareness for future generations.

It’s no coincidence that the Dr. Miriam and Sheldon G. Adelson Educational Leadership Academy is opening now, on the first yahrzeit of the late philanthropist and just weeks before the arrival of International Holocaust Awareness Day (Jan. 27).

The academy was born of a concern over reports that fewer people the world over know much about the Holocaust 80 years after it destroyed a third of world Jewry. It’s also a time when anti-Semitism and Holocaust distortion are gaining traction, especially online, and survivor witnesses are dying off. It was designed specifically to “create a community of leaders who can build networks to educate people around the world to be forces for confronting the growing threats of anti-Semitism and Holocaust distortion,” Yad Vashem chairman Dani Dayan told JNS. “Only when people have accurate knowledge can they combat the fake ‘facts’ spread through social media and in person,” he adds. “Which is why Holocaust education with its historical authenticity is so important.”

The academy is the newest initiative out of the International School for Holocaust Studies of Yad Vashem, the World Holocaust Remembrance Center that has trained hundreds of thousands of educators from more than 50 countries over the last nearly 30 years and supplied teaching materials for countless more. The figure of students reached, they report, exceeds 12 million.

And the academy has an ambitious job description: spearheading and coordinating efforts to grow powerful Holocaust-education programs in every part of the globe, including in cyberspace. 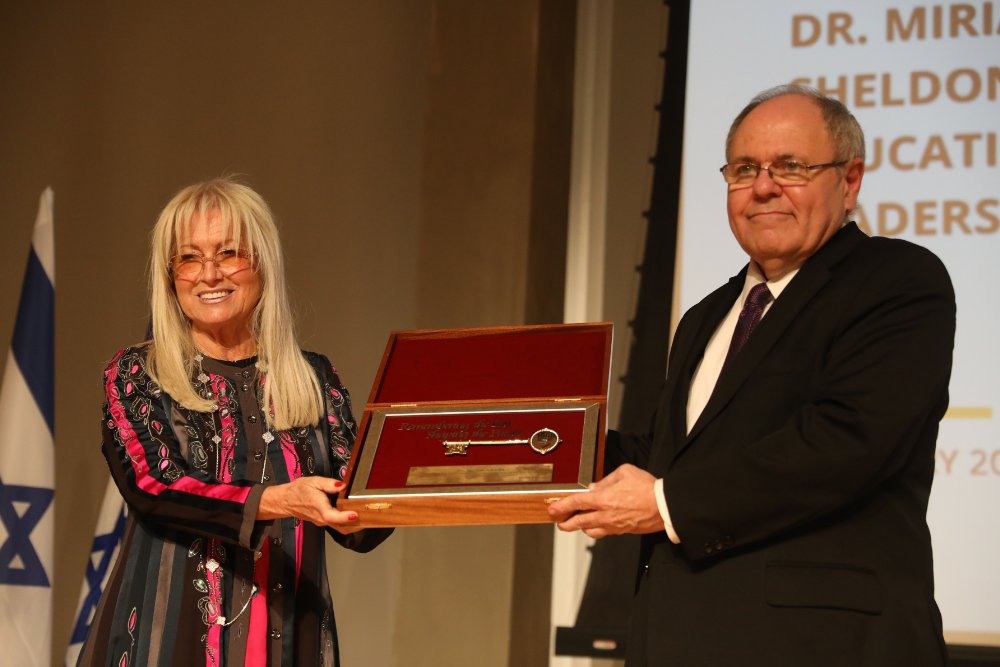 The plan is to raise a new cadre of leaders to help ensure that the next generation knows what happened during the Holocaust before it gets swept into the dustbin of ancient history or corrupted by those who claim it never happened.

One goal is to train “ambassadors” of Holocaust education around the world, who will, in turn, grow networks in their countries among opinion-shapers: educators, diplomats, clergy and civic leaders, as well as those in the military and law enforcement.

‘We have to teach about it’

At the dedication ceremony, Adelson had high praise for the International School for Holocaust Studies, which the couple has long supported. “This school teaches foreign educators about the Holocaust, so that they might teach it in turn when they return home,” she said. “At a time of spiraling anti-Semitism globally, these teachers, whose countries of origin have included Turkey and Jordan, are equipped to spot and call out this unique evil before it spreads.”

It’s also no coincidence that the academy is being established now at a time when Holocaust survivors—many of whom regularly shared their stories with school children and other groups—are disappearing from the world stage, leaving behind them only memories along with videos, audiotapes and written testimonies.

Survivors like Lydia Lebovic, who was among the last of these witnesses, and who was bent on telling the next generation the horrors they had somehow managed to survive.

Over the years, Lebovic shared her story with thousands of Las Vegas schoolchildren—from the day in 1944 when the Nazis invaded her Hungarian town when she was 16, bringing curfews, yellow stars and her best friend spitting on her in the street, into the ghetto, then the three days crammed with 60 others into a cattle car to Auschwitz to a work camp and eventually to Bergen-Belsen where she was liberated on April 15, 1945.

“We have to learn about it; we have to teach about it. Because our time is running out,” she told the kids at Ernest May Elementary School in Las Vegas back in 2007. “There are not too many of us surviving at my age.” 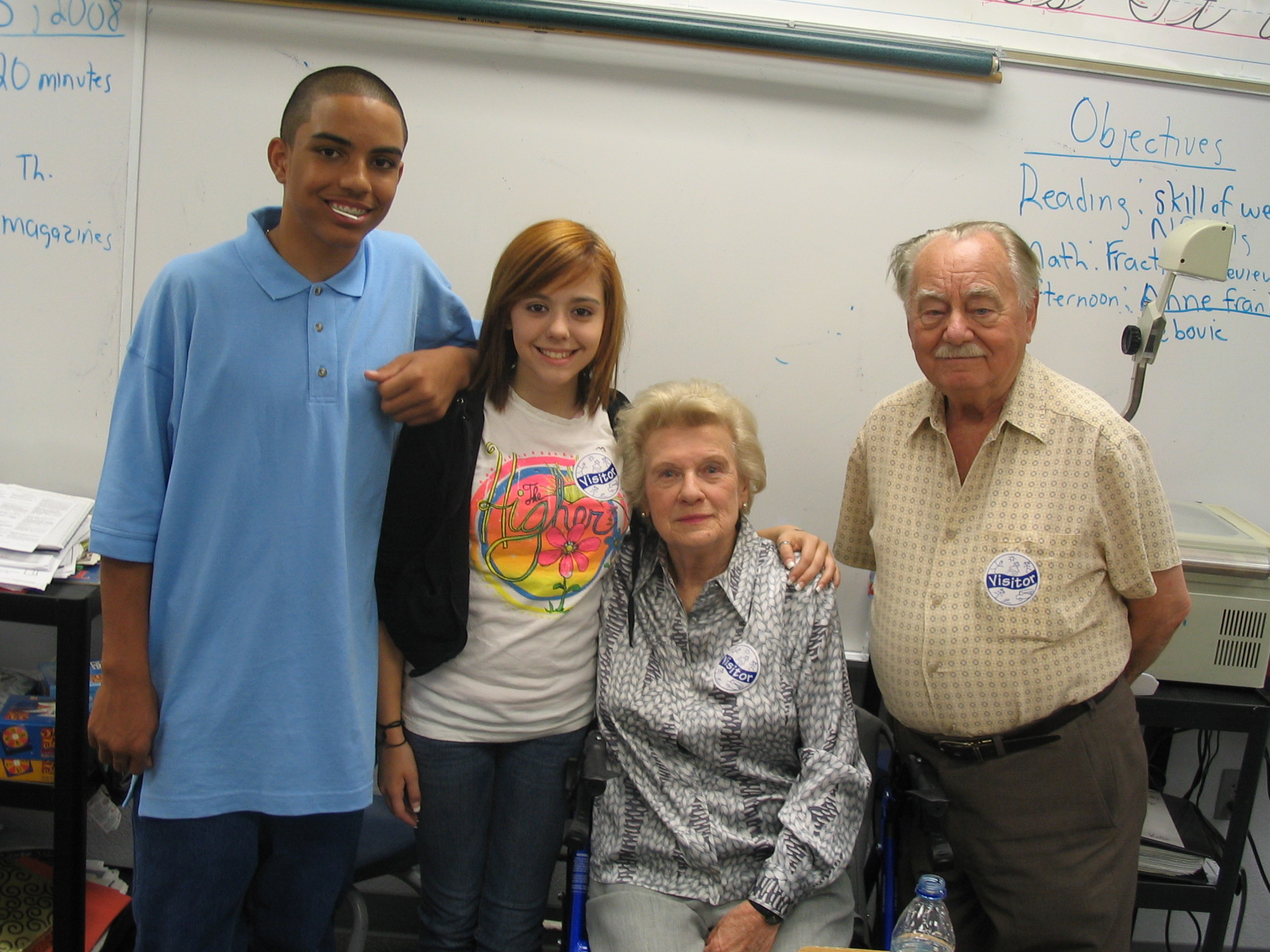 It wasn’t all that long ago when thousands of Holocaust survivors like Lebovic regularly visited schools to tell about their experiences. But now that most of the survivors are gone—Lebovic, for instance, died in 2018 at age 90—and no longer able to put a human face, often with a tattooed arm, on the worst crime in human history, education is left to pick up the torch.

Much of this responsibility will fall on teachers like Mitchell Kalin of Nevada, who repeatedly brought Lebovic into his classes over the years—first in elementary and then in middle school. “I miss her and the kids miss her,” says Kalin. “She thoroughly engaged them which had such a powerful impact. But through the video, even though she’s not here anymore, she’s still teaching.”

Kalin also says the 10 days he spent learning state-of-the-art Holocaust teaching methods at Yad Vashem’s Echoes and Reflections program in 2019 made him better able to convey this often-challenging subject. “I used to find my own resources, basically winging it,” he says. “But now I’m a lot more confident about what I have to offer using their resources.” So much so that he’s training other teachers in the district and helping connect countless Nevada educators to Yad Vashem programming as well.

This kind of networking is exactly what the academy intends to nurture. Already in the works: In the Democratic Republic of Congo, where one teacher trained at the International School (in French, one of 13 languages they teach in) pulled together a group of his fellow professors to learn Holocaust teaching skills; and in India, where a school principal gathered her teachers to work on a Holocaust program reaching 150 students. Often beginning with graduates of International School seminars, these networks are reaching into countries as far afield as China, Australia and Peru (whose ambassador and minister of education have gotten involved.) Next up is an online seminar involving 10 Latin American countries’ governmental and educational representatives.

“In addition to the States and Canada, we’re widening our influence in countries across Asia and Africa, Europe, South America, Australia and New Zealand,” says Richelle Budd-Caplan, who directs international relations for the school. “When it comes to strengthening Holocaust education, each country needs its own tailor-made approach. But wherever it is, we make sure to impact the people who will have the most impact and to be there for them to follow up with the age-appropriate resources and training they will need.” 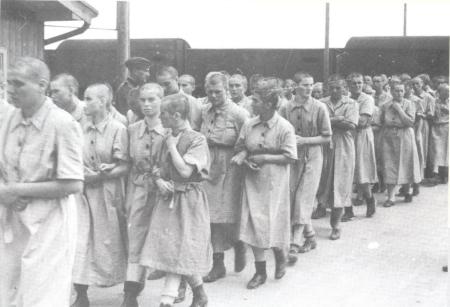 A photograph taken by a Nazi guard of the women entering the camp after having their heads shaved. Lydia Lebovic is in the middle of the photograph. Credit: Courtesy.

‘At a turning point because the threat is real’

Such outreach comes at a crucial time, say those who work with today’s college students. Not only is Holocaust “revisionism” increasingly found online, but many of today’s schoolchildren are likely to walk onto campuses a few years hence where anti-Semitic and anti-Israel forces often include Holocaust denial in their arsenal.

“Since many college students lack critical historical knowledge of the Holocaust, it leaves space for Holocaust-deniers to fill the vacuum with outrageous lies,” says CAMERA’s international campus director Aviva Rosenschein. On North American campuses, there are professors and anti-Israel students comparing Israel to Nazi Germany and the former prime minister of Israel to Adolf Hitler. “By describing Israel as the new Nazi Germany, they’re using the Holocaust against the Jews—the very people whom all that evil was perpetrated on just a generation ago. That’s why Holocaust education has to become a bigger priority in primary, middle and high school to set the record straight before they get to campus.”

Yad Vashem chair Dayan agrees and says why. “You see anti-Semitism on the rise, even in the United States—in Poway, Pittsburgh, Monsey, Jersey City and other cities where Jews are attacked simply because they are Jews,” he says. “We are at a turning point because the threat is real and, though I am not implying that we are in the same situation German Jews were in the ’30s, we have something they did not: We have proof that anti-Semitism can grow to monstrous proportions (the Holocaust) and that it needs to be stopped before it gets out of hand.”

Learning from the past, he adds, especially Holocaust education, is “a key to confronting it.”

Which brings us back to educators like Kalin, who are committed to sharing this painful but important chapter in history not only with their students, but with other educators who can spread it exponentially, hate-proofing a new generation in the process.

“For years, it’s been my passion teaching the Holocaust,” he says. “And the great thing is that the fact that this could even happen teaches kids empathy, hopefully making them a lot less likely to be anti-Semites or racists.”

There’s another powerful lesson here too, adds Kalin: “If anyone ever tells them the Holocaust never happened, they can come back from a position of knowledge. And because they’ve learned that if you stay silent in the face of hate it allows hate to win.”

Indeed, training teachers today to raise awareness of the generations to come, Adelson told the crowd who gathered at Yad Vashem to dedicate the new program, “helps make the Jewish catastrophe a firm fact in the international consciousness, a fact beyond denial—in the hope that the world which turned a blind eye during World War II will not do so again and will ensure that such events never recur. This [the academy] is an edifice for the remembrance of the Holocaust martyrs and heroes, and, in parallel, proof that the Jewish people prevailed—and chose life.”