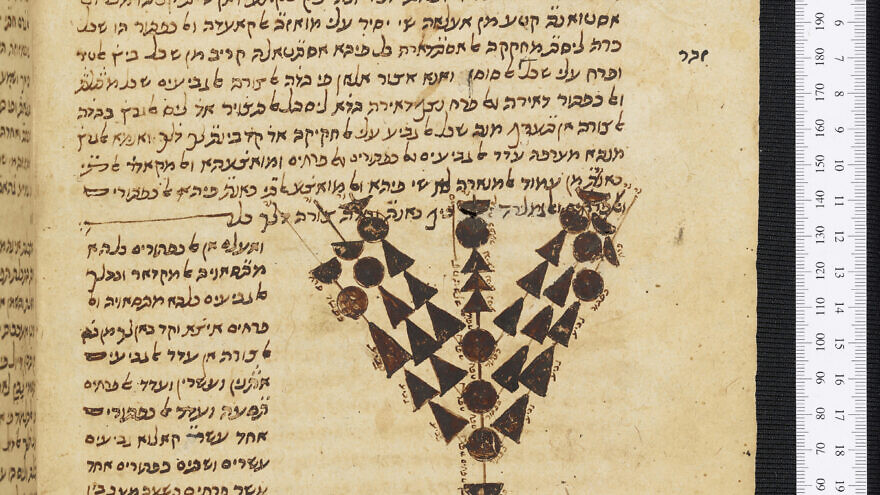 (December 9, 2022 / JNS) The Yeshiva University Museum has announced that its upcoming exhibition will feature a hand-drawn illustration of the Temple menorah from a manuscript that contains notes by the famed Jewish sage Maimonides (Rambam).

The exhibition, “The Golden Path: Maimonides Across Eight Centuries,” will run from May 9-Dec. 31, 2023, at the museum in New York City. It will also feature a copy of the Rambam’s Mishneh Torah that was reportedly personally signed by Maimonides. The Temple menorah drawing is found in a 12th-century copy of the Rambam’s “Commentary on the Mishnah,” with his handwritten notes in the margins.

The drawing of the Temple menorah shows seven straight, rather than curved, branches. This unique image of the holy gold candelabra may have been drawn by Maimonides himself, according to a press release from the museum.

Other items to be featured include rare pieces on loan from the Bodleian Library in Oxford, the British Library, the Royal Danish Library, the Mantua State Archive of the Italian Ministry of Culture and the National Library of Israel.

“The partnerships with international collections are unprecedented, and the exhibition stands to be one of the most impressive collections of Maimonides artifacts ever to be displayed together,” said Gabriel Goldstein, director and chief curator of the Yeshiva University Museum.