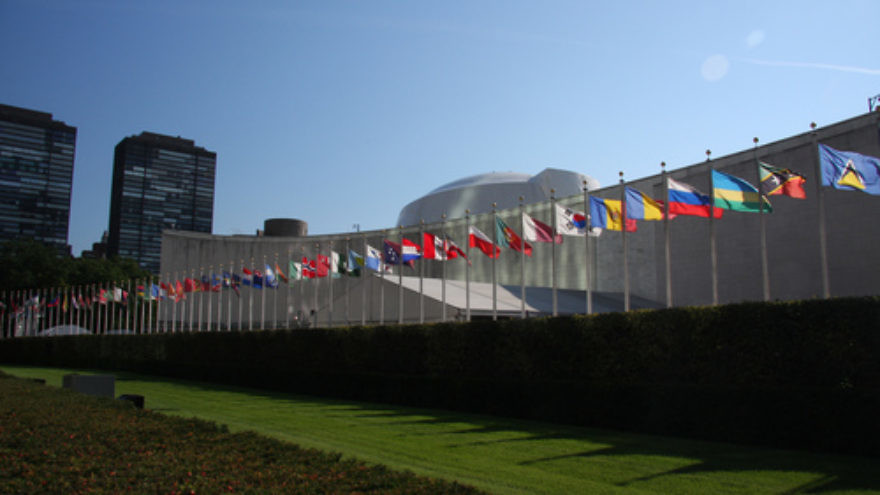 The row of flags of member countries of the United Nations in front of the U.N. General Assembly building in New York. Credit: Wikimedia Commons.
Spread the word.
Help JNS grow!
Share now:

“It is outrageous that America sends even a dime of taxpayer money to the U.N., an organization of nations who are only united by their animus towards Israel, the one and only Jewish state,” Klein said in a statement, lamenting that the world body was “created with a beautiful vision” but now has “degenerated into little more than a propaganda outfit” that embraces Jew-hating regimes.

Klein’s statement came in the wake of the United Nations Security Council meeting on Dec. 19, when Special Coordinator for the Middle East Process Tor Wennesland referred to the Old City of Jerusalem—where the First and Second Jewish Temples stood—as “occupied East Jerusalem.” Wennesland also criticized the increase in new housing units being constructed for Jewish residents in the Israeli capital.

The Security Council session took place towards the beginning of Hanukkah, which commemorates the Jews’ re-dedication of the Temple in Jerusalem over 2,000 years ago.

“The ZOA opposes the proposed funding to this counterproductive and corrupt organization,” Klein said in reference to the U.N., “and supports only transparent, humanitarian operations.”

In Washington, the Senate is preparing to vote on the omnibus spending bill.

And, of course, $1,438,000,000 for membership in global multilateral organizations, including the UN. pic.twitter.com/LHjDYXG2Us

“The funding process for the United States federal government is complex, especially when not conducted under regular order,” Klein stated. “The proposed spending bill contains many good elements, and we are always grateful for Congressional support for programs that increase American security by supporting our allies. However, the U.N. is filled with mostly American adversaries and is known for corruption and kleptocracy more than for positive initiatives.”