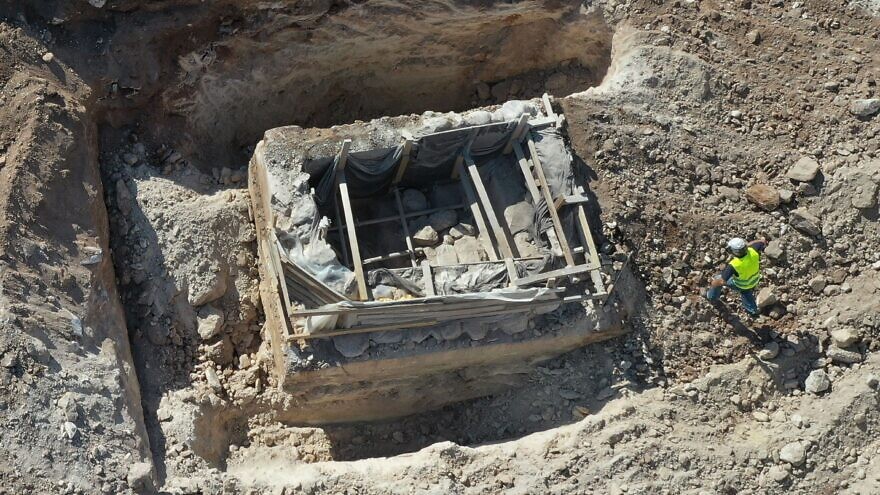 The 2,000-year-old mikveh discovered in the Lower Galilee, as it is about to be airlifted to Kibbut Hannaton on Sept. 30, 2020. Credit: Yaniv Berman/Israel Antiquities Authority.
Spread the word.
Help JNS grow!
Share now:

(September 30, 2020 / JNS) An ancient mikveh (ritual bath) uncovered at the construction site of a highway interchange in the Lower Galilee was transferred today to nearby Kibbutz Hannaton.

The 2,000-year-old mikveh, which was discovered during salvage archaeological excavations conducted by the Israel Antiquities Authority (IAA) at the National Transport Infrastructure Company site, was placed next to a modern functioning ritual bath on the kibbutz, the IAA reported on Wednesday.

“The discovery of the mikveh in the farmstead changes what we knew about the lifestyle of the Jews in the Second Temple period,” stated Abd Elghani Ibrahim and Dr. Walid Atrash, directors of the excavation on behalf of the IAA.

“Until now, we hadn’t discovered Jewish farms in the Galilee. It was considered that the Jews in the Roman period didn’t live in farms outside the villages or towns. The discovery of the farmstead at some distance from the village of the Shikhin and the large Jewish town of Sepphoris, showed that Jews also settled in farmsteads, that perhaps functioned as the rural hinterland of Sepphoris,” they explained.

Furthermore, they added, the “existence of a mikveh … unequivocally indicates that the residents of the ancient farm were Jewish, who led a religious and traditional way of life, and maintained [ritual] purity as a Torah commandment.”

According to the IAA, some 1,700 years have passed since the farm was destroyed in an earthquake, and about 1,400 years since the site was finally abandoned.

The mikveh was discovered while construction crews were digging foundation trenches necessary for anchoring one of the supporting bridge columns erected to secure the major interchange that crosses over the Jezreel Valley, according to the IAA.

The IAA explained that since the mikveh could not be preserved on the site of the interchange, the idea arose to transplant it elsewhere for public display. The IAA, members of Kibbutz Hannaton, Israel’s Jerusalem and Heritage Ministry, the National Transport Infrastructure Company and the Jezreel Valley Regional Council and residents cooperated to raise the funds to move the 57-ton mikveh.

For the past week, work was carried out to detach the mikveh from the bedrock—by sawing on all sides—and place it in a steel cage, which was finally airlifted to its new home on the kibbutz on Wednesday.

The IAA excavations that uncovered the mikveh were conducted with the help of workers from the village of Kfar Manda, students of pre-military preparatory programs and volunteers from the vicinity, including residents of Kibbutz Hannaton.