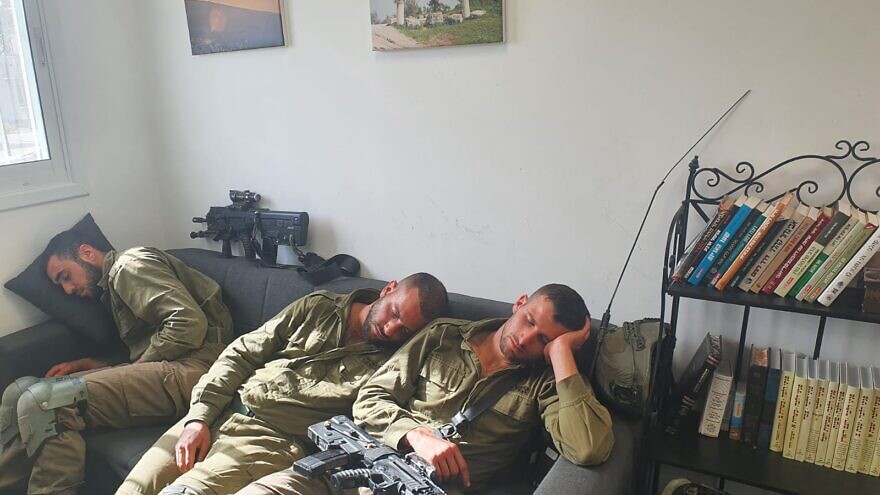 (October 26, 2022 / JNS) In the middle of the night, a group of commandoes from the IDF’s elite Duvdevan Unit arrived at the community of Mitzpeh Yericho, overlooking the Jordan Valley and the Dead Sea. They were hungry and tired after a long day of service.

As luck would have it, Mitzpeh Yericho houses one of the 31 Pinot Chamot, or “Warm Corners,” canteens for Israeli soldiers operated throughout the country by the Yashar LaChayal (“Direct to the Soldier”) volunteer organization.

The Pinot Chamot project is the backbone of the organization’s activities with facilities manned by more than 60 volunteers from the Lebanon border in the North all the way down to the South, and throughout Judea and Samaria, to provide IDF soldiers the opportunity to grab a cold drink or take a load off and recharge, before returning to duty.

Leon Blankrot, executive director of Yashar LaChayal, told JNS that the organization was founded following the 2006 Second Lebanon War. During the war, Blankrot and a small group of volunteers headed north, at times under rocket fire, to supply front-line soldiers with much-needed toiletries, clothing and other necessities, in the midst of the battle with Hezbollah.

“After the war we decided to build on that experience and form an entity, in order to help the soldiers directly,” he said. A non-profit association was registered and, with the help of donors, mostly from abroad, Yashar LaChayal went to work.

“At one point, we were handing out 25,000 fleeces a year to the soldiers to keep them warm, delivering 12,000 mishloach manot [Purim gift bags], really anything that benefits our IDF troops.” 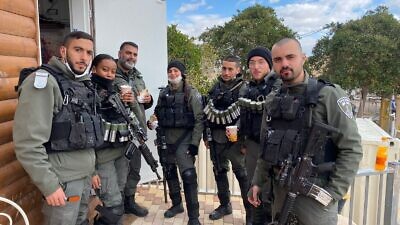 The organization then launched other initiatives such as helping soldiers from poor families rent apartments and supplying them and their families with home appliances. A bereaved family fund was established to provide financial assistance to surviving family members including college scholarships, along with organizing recreation/fun days for families who have lost loved ones, and much more.

Blankrot can’t hold back his enthusiasm when discussing the Pinot Chamot.

“We provide all 31 Warm Corners with a budget for supplies, and our volunteers purchase food, drinks, etc. to fill up the fridges inside the Warm Corners at the respective community’s local supermarket, so it’s a win-win.”

Each Warm Corner also has air-conditioning during the summer, heat during the winter, couches for soldiers to rest on, microwaves, toasters, phone-recharging stations and more, Blankrot said.

“At the same time, most of the Warm Corners are located near the entrance to the communities, which creates a deterrent for our enemies who see the presence of soldiers in the area,” he added.

“So the residents of the community have a greater feeling of security, and in addition, they always want to stop by and say thank you to the soldiers for their service,” Blankrot said. “This creates camaraderie with those who keep them safe, while the soldiers have access to free food and beverages in a well-maintained air-conditioned or heated space where they can relax on their well-deserved breaks.”

Other organizations also operate similar facilities in locations throughout Israel in order to show appreciation and give back to the soldiers.

The Gush Etzion Foundation, through its donors, is the key supporter of the Gush Etzion Warm Corner, located at the busy Gush Etzion Junction south of Jerusalem, where many soldiers are on duty.

One of the first such facilities in Israel, the Gush Etzion Warm Corner was founded during the Second Intifada in 2001, by Ruti Gillis and Ossy Sasson. Gillis’ husband, Dr. Shumuel Gillis, and Sasson’s husband, Tzachi Sasson, were both murdered, 10 days apart, in terrorist shooting attacks, and their widows founded the Warm Corner in their memory.

More than 250 soldiers stop by the Warm Corner on a daily basis, from the early hours of the morning till very late at night.

Gabi Harow, director of development for the Gush Etzion Foundation, told JNS, “Our warm corner has a dual purpose. Firstly, it gives the soldiers a place to come and relax after a hard mission, so they can get some water, coffee, or some food, and at the same time it allows the residents of Gush Etzion and Efrat to say thank you to the troops who work day and night to protect us.” 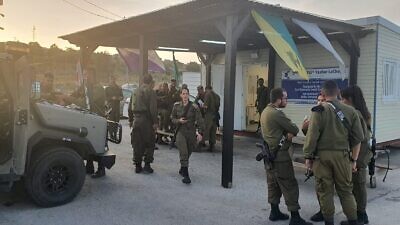 Soldiers chat at a Warm Corner. Courtesy of Yashar LaChayal.

Blankrot explained that Yashar LaChayal’s Warm Corners are named in memory of fallen soldiers. Often when a Warm Corner is dedicated, it is done not only in the presence of a donor, but also alongside the family members of the soldier whom it is named after.

“The families are blown away by this. They understand that the soldiers who arrive at the Warm Corner will read the stories of heroism and learn the heritage of their fallen comrade.”

In one particular incident, Blankrot was moved beyond words when the parents of a soldier who was killed in battle arrived for the dedication in their son’s memory and told him, “This is the first time we felt our son’s soul [since he was killed], here in this place,” as other soldiers were arriving to use the facility.

Blankrot said that the organization hopes to establish more Warm Corners in more communities. “It’s something that keeps giving and giving,” he said.

Meanwhile, he shared a thank-you letter from a group of Maglan special reconnaissance unit soldiers who visited the Warm Corner in the Binyamin community of Psagot, north of Jerusalem.

“We just wanted to give a big thank-you to the residents of Psagot for all the wonderful things they did for us, and on behalf of all the soldiers who had the merit of passing through the Psagot Warm Corner! It makes a huge difference in our service. And even more than the physical sustenance of the food you gave us, it was truly moving to see how you gave of your souls for us. We are all touched by your devotion. We truly thank you for everything!”