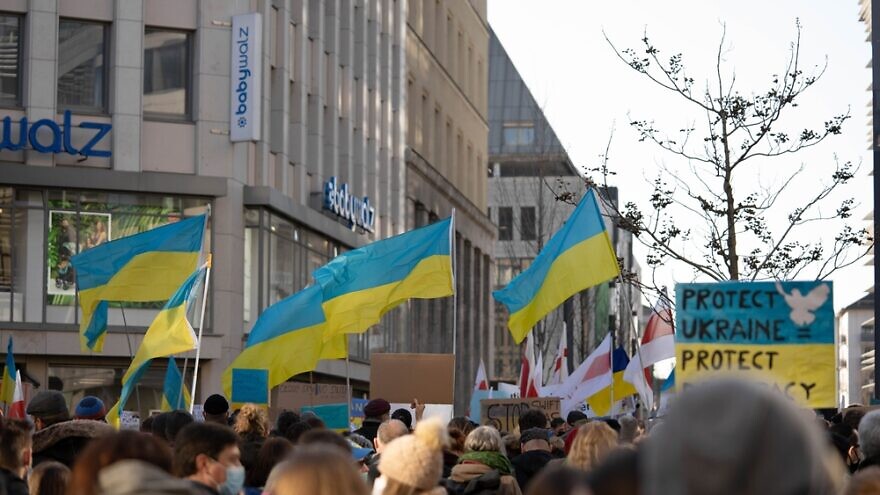 (February 28, 2022 / JNS) The inauguration of a Torah scroll at the newly refurbished Beth-Zion synagogue in former east Berlin on Sunday was supposed to kick off with a cheerful, musical street procession. While not the synagogue’s first “hachnasat Torah” ceremony, they are always happy occasions — simchas — especially considering how they symbolize the revival of Jewish life in Germany, now home to some 200,000 Jews.

But after the Russian invasion of Ukraine on Feb. 24, community leaders decided to scrap the music, and keep the ceremony simple and solemn.

“Since Thursday, everyone has been so traumatized and shocked and not really in the mood to celebrate,” said Anna Segal, the CEO of the Kahal Adass Jisroel congregation in Berlin, which organized the simcha.

Not just another war

Segal grew up in St. Petersburg and moved to Germany in 1997, but she has fond memories of summer trips to her mother’s family in Ukraine. Her grandfather fought against the Nazis in the Soviet army while her great uncle was killed on the first day of the war.

“They take it very personally because for us it’s still part of our identity; it’s not just another war on the map,” Segal said of the current Russian invasion.

Across Germany, Jewish communities of all denominations are collectively focused on assisting Ukrainian Jews, whether they choose to remain in Ukraine or flee.

“Germany has a history of accepting Russian-speaking Jewish refugees, so I assume we have the [necessary] infrastructure, probably second to Israel,” said Segal.

It’s an ironic, even tragic twist of fate for some, given their ancestors once had to flee — or fight —the Germans.

Outside of Ukraine, whose Jewish population stands at around 350,000, Germany is home to the largest population of Russian-speaking Jews in Europe, the result of a post-Cold War decision by Germany to replenish its decimated Jewish population with Jews from the former Soviet Union. For them, Russia and Ukraine are not enemy countries. Aside from political fringes and an older generation that consumes Russian state television, Jews stand firmly on the side of Ukraine, the victim of unprovoked aggression.

But their concern first and foremost is humanitarian, not political. On Monday, the Chabad of Berlin welcomed among the first Ukrainian refugees and is activating the community to assist them. According to Chabad Berlin, 200 Chabad rabbis serve 35 cities in Ukraine and have acted as go-betweens.

In Düsseldorf, the capital of Germany’s largest federal state, North Rhine-Westphalia (NRW), the Jewish community organized a post-Shabbat vigil for Jews to pray for peace, express solidarity and figure out how to help.

“Many have family and friends there so they’re really, really worried and they’re really trying to get them over, but the one problem, of course, is that men under 60 years old are not allowed to leave the country. They Ukrainians want them to stay and fight,” said Dr. Oded Horowitz, the chair of the associated Jewish communities in NWR. An Israeli-born ophthalmologist who moved to Germany as a teenager, Horowitz has reached out to local politicians to facilitate the passage of Ukrainian Jews to Germany.

“Another problem is that it’s not that easy to leave,” he said. “You have no flights; the streets are blocked. I don’t know how much trains are working.”

Overall, Germany has taken a welcome stance toward the refugees. It offers Ukrainians passage to Germany visa-free for 90 days. Ukrainians who are able to make it to Poland get a free train ride to Germany, courtesy of the German national railway, Deutsche Bahn. The Central Council of Jews in Germany is in touch with authorities to settle Jewish refugees long-term, as needed.

“I also offered the support of my community to do integration since we have expertise and knowledge since we have been doing this for the last 30 years ever since Jews came from the former Soviet Union,” Horowitz said.

On the political end, he is pleased with Germany’s recent political about-face. On Sunday, Chancellor Olaf Scholz announced Germany’s decision to confront Russia with sanctions and military assistance to Ukraine.

“Leo,” a 36-year-old Ukrainian Jew who migrated to Germany as a teenager, is in constant touch with relatives and colleagues in Ukraine. Like most German Jews with family members in Russia, he fears retaliation by Russian President Vladimir Putin and asked to speak on condition of anonymity.

Like his Russian-speaking counterparts, he gets his news from firsthand accounts via social media and personal messages. He fears for relatives in Kharkiv, which is reportedly under Russian missile barrages. He has not recently heard from them, presumably — and hopefully — because they’re bunkered in subway stations without reception.

“I’m a little bit afraid if Russians take the city, they will harm the Jewish community in Kharkiv,” Leo said, recalling his childhood visits to the city.

He believes Ukraine has come into its own as a modern nation-state in the last decade, a process now being accelerated by Putin’s aggression and the leadership of its widely hailed Jewish president, Volodymyr Zelensky.

“If the Ukrainians elected him really democratically — the real majority — it shows modern Ukrainian society,” Leo said. “As someone who has been to Ukraine several times in the past few years, I can really say this isn’t the same society as Soviet or early independence time.”

Segal recalls how much she loved watching the Ukrainian president on his late night satire show, describing Zelensky the entertainer as “amazing.”

“You feel like you kind of know him,” Segal said. “He didn’t have a strong standing as a politician because they said he’s just an entertainer and just acting as a president, but that he is taking a strong position and not fleeing and standing with the fighters, his image is gaining a lot.”

Strong leadership by a Jew through the crisis, however, does not necessarily trigger more patriotism.

“I heard yesterday from some people that it’s a major concern for Jews because it’s obvious whatever he does, the Jews will be blamed,” Segal said.

Does the preparation for yet another influx of Ukrainians Jews on German soil signal pessimism about a Ukrainian victory? History has yet to decide.

“I don’t think it’s pessimistic but realistic,” she said. “We’re just more worried how they can get here soon enough and how we can spread the word that we are happy to have them.”