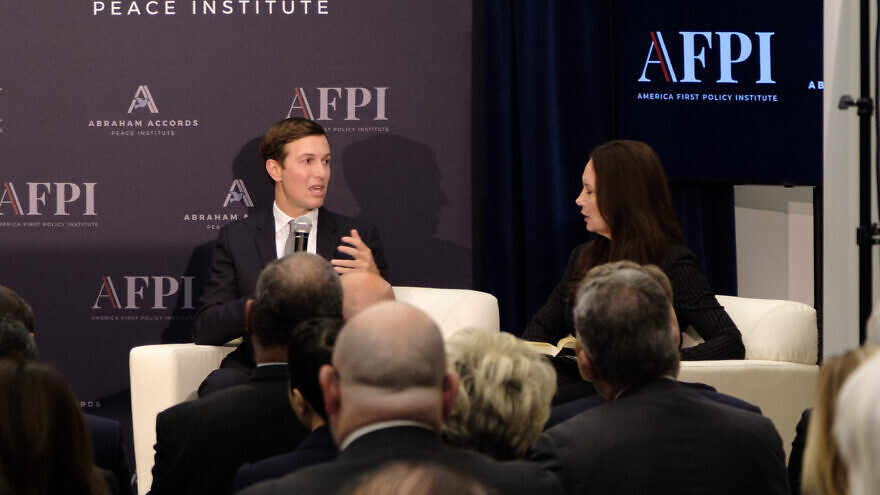 (September 14, 2022 / JNS) Two organizations with many former Trump administration officials joined together on Monday to celebrate the second anniversary of the Abraham Accords, which over the years has proven far more durable and consequential than many expected when signed under former President Donald Trump.

The accords created the first warm peace between Israel, United Arab Emirates and Bahrain, with the agreement growing quickly to include Morocco and Sudan and flowering of economic and person-to-person exchanges over the years.

Participants at the event, which was co-sponsored by the Abraham Accords Peace Institute and the America First Policy Institute (AFPI) and held at AFPI’s Washington D.C. office, recounted how the agreement came to be from an insider’s perspective.

Trump’s son-in-law and senior advisor Jared Kushner, who led the successful effort toward the accords, was interviewed by AFPI CEO Brooke Rollins.

Kushner called the Abraham Accords a combination of the “right people, at the right places, at the right time working together,” referring to the Trump administration officials, as well as leaders from the United Arab Emirates, Bahrain, Morocco and Israel who worked on the effort.

Kushner, who recently released his book, Breaking History: A White House Memoir said that part of what got the administration to achieve the accords was his outsider’s perspective and of some of the key players in the Trump administration.

“Because I had no experience in diplomacy, I think that was both an asset and my liability right there. And what I did is for the first year, I really was trying to meet with all the people who’ve worked on it before and try to get their perspectives,” Kushner told Rollins, who is also a former Trump administration staffer. “And what I found was that people may have thought—once I got going—that I was doing it the wrong way. But I was pretty convinced that they were all doing it the wrong way. And I think that they had achieved a very similar result which is by constantly going back to the same issues in the same ways, they constantly were failing.”

Instead, he said, the administration decided to focus on the common interests of those nations, noticing that there wasn’t a channel for Arabs and Israelis to have a connection to truly understand each other.

Kushner said he believes that the Abraham Accords are reducing the hostility that has existed in the region for more than 70 years, as well as restoring the ability for Muslims, Jews and Christians to live together in harmony—to meet each other, have dinner together, do business and talk.

He pointed out that when the Trump administration came into office, ISIS had a caliphate the size of Ohio; Iran was being provided with $150 billion through the Joint Comprehensive Plan of Action to fund its malign activities in the region; Syria was still in a civil war; and Libya and Yemen were unstable.

Five years later, the region has become one of the most exciting in the world economically, he said.

“The young generation that we were worried about being radicalized by the extremists is now being inspired by their leadership to build startup companies, and to figure out how to make the region and the world much better,” said Kushner. “So I do think that paradigms can shift, but it takes people with courage and determination to stick to it in order to make that happen.”

In the lobby outside the event space, a table included stacks of Kushner’s book for attendees to take. 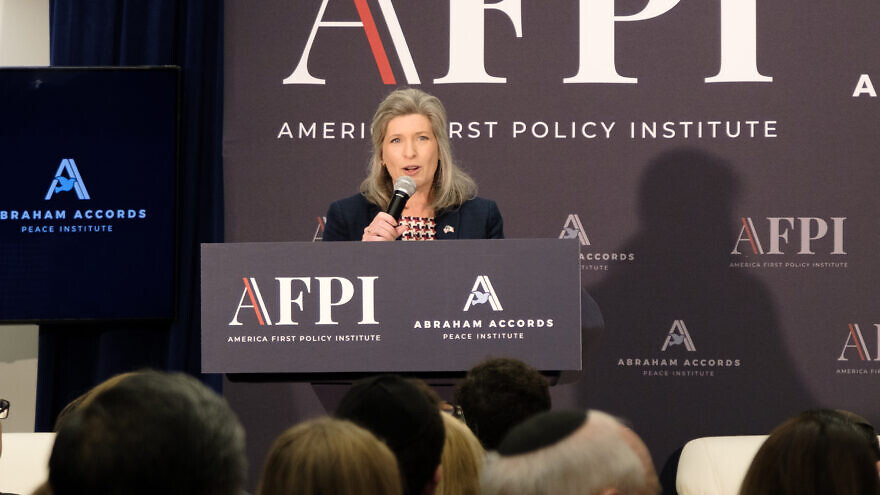 The discussion with Kushner was followed by a panel discussion moderated by Abraham Accords Peace Institute president and executive director Robert Greenway.

The panel discussed what they saw as the future results of the relationship between Israel and its Arab neighbors within their areas of expertise.

Pearl, the only panel member who was not a member of the administration but is a supporter of the accords, described taking his team on visits to Israel, and his vision to inaugurate a basketball tournament for Abraham Accords member nations in the region.

The panelists echoed Kushner’s praise of those who made the accords happen and shared his excitement for the future possibilities between the nations.

O’Brien said that those who were involved in the process not only took a political risk but a physical one as well.

O’Brien spoke about the positive effects the accords have on American security interests in the region. Iran, he said, was an immediate threat in the region, but a long-term threat came from China, which was attempting to bolster its technology by investing in Israeli technology startups.

The alliance of Arab Gulf nations and Israel provides a strong counterbalance against Iran. In fact, the business opportunities between nations have also weakened China’s ability to invest in Israel, as there are now significant investors in Israeli startups from Gulf countries.

“What it’s done is it’s enabled to push the Chinese out because the Chinese are always predatory in their investment and in their loans, and the Israelis get a fair deal with folks in the Emirates or Bahrain or Morocco,” said O’Brien.

Much of the event was dedicated to praising the foreign-policy accomplishments of Trump, though criticism of the current administration was surprisingly sparse.

A notable difference from the overall tone of the event was in the keynote address delivered by Sen. Joni Ernst (R-Iowa), who delivered a presidential campaign-style address, saying the differences between Trump and Biden’s administration were like night and day.

“The last 18-and-a-half months under a feeble commander-in-chief, a scripted and ill-equipped vice president and a blindly progressive congress have temporarily clouded American peace and prosperity,” she said. “And we’re experiencing the consequences of a government subservient to a Twitter mafia of liberal media members and Ivy league campus protesters. We’re feeling it at the grocery store, we’re feeling it at the gas pump, we’re seeing it in our communities that are being ravaged by crime and by drugs.”

Ernst, co-chair of the Senate Abraham Accords Caucus, called the accords the most significant peace agreement in the 21st century and described the Senate’s bipartisan, bicameral work to strengthen regional defense and counter Iran.

She said that the accords reconciled the deaths of the thousands who died fighting the global war on terrorism, including 600 American servicemembers who were killed in either Iraq or Syria by Iranian proxies.

“With the Iranian threat minimized, economic collaboration and cultural exchange—key pillars of the Abraham Accords—can flourish,” she said.

A combat veteran, Ernst expressed appreciation to those in the room who helped make it possible.

“Like many of you, I believe in America first always, but never America alone,” she said. “Our core advantage is maintaining strong allies and partners abroad. Those relationships protect us here at home, and we have a longstanding track record of that commitment holding true. We must continue to push for further normalization and grow security cooperation with willing nations to thwart threats before they hit us here at home.”