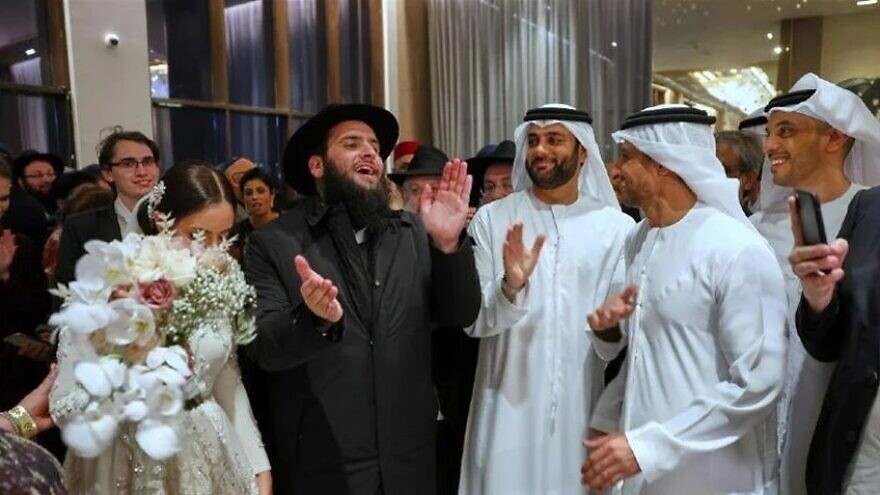 Rabbi Levi and Lea Duchman with well-wishers right after their marriage. With 1,500 guests from around the world, including leading rabbis, dignitaries and Emirati royals, the wedding was the largest Jewish event in the history of the United Arab Emirates. Credit: Jewish UAE/Christopher Pike.
Republish this article
883 WORDS
Spread the word.
Help JNS grow!
Share now:

(September 14, 2022 / Chabad.org/News) Rabbi Levi Duchman, Rabbi to the UAE, and Lea Hadad celebrated their wedding in the country’s capital city, Abu Dhabi, on Wednesday surrounded by 1,500 guests from around the world. Guests included Emirati royals, prominent rabbis, dignitaries and much of the country’s burgeoning Jewish community. The wedding is a landmark event marking a new era for Jewish life in the Arab World.

Hundreds of local Jews and Arabs, for whom this was the first Jewish wedding ever experienced, were in attendance. With people from across the Emirates and around the world, who speak Arabic, Hebrew, Yiddish, French and other languages, the proceedings were conducted in English, which is understood by the plurality of guests.

The wedding, the largest Jewish event in the Arabian Gulf in recent history, was held in Abu Dhabi’s Hilton Yas Island and catered by the hotel’s team of international chefs. Kosher certification was provided by EAKC (Emirates Agency for Kosher Certification), the sole government-certified kosher supervision agency, which was founded by the groom to make kosher food available in the Emirates.

Much of the supplies, from locally slaughtered kosher chickens to imported kosher wine, as well as a growing plethora of Jewish services, are all available locally through a constellation of Jewish institutions created by Rabbi Duchman with support from the government. Ahead of, and since, the signing of the Abraham Accords in the fall of 2020, the availability of Jewish amenities in the UAE has greatly enhanced.

Dozens of young children attend Mini Miracles, the country’s first Jewish school, while dozens of other children attend the Talmud Torah, the Jewish educational supplemental program. Both the grades and enrollment are expected to expand year over year in the near future. There is a well-trafficked mikvah, completed last year in Dubai. 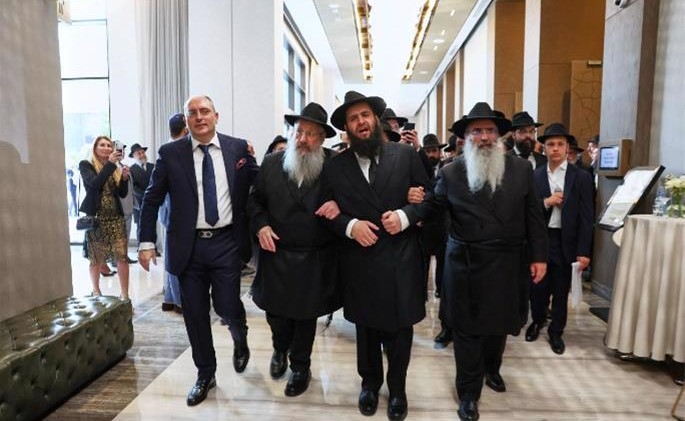 Rabbi Levi Duchman is led to the veiling ceremony at his wedding. Credit: Jewish UAE/Christopher Pike.

With kosher certification and supplies available, privately owned kosher restaurants and caterers have begun to pop up. Many hotels now offer kosher catering and room service, something not often available outside of Israel. There are daily and weekly Torah classes and prayer services held across Dubai and Abu Dhabi.

The necessities for Jewish communal life are increasingly available in the Emirates. Jews from around the world are finding the UAE a viable place to visit and live because of the growing Jewish infrastructure created by Rabbi Duchman and the kosher options now available as a result.

The Jewish community enjoys strong support from UAE leadership and openly celebrates Jewish life and holidays. With the near-daily additions to their ex-pat community and the flow of Jews and Israelis to the Emirates, Jewish UAE provides relocation support and business networking. 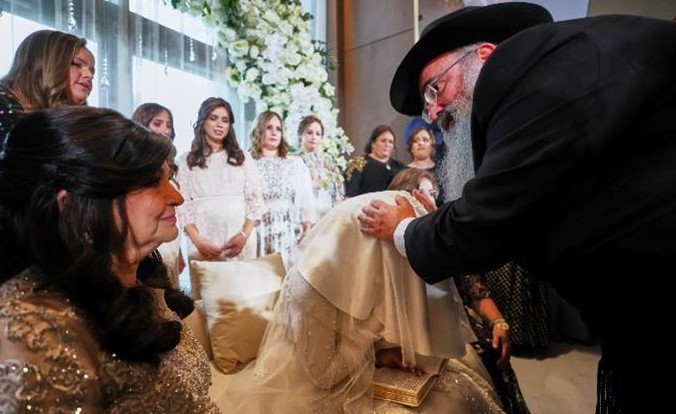 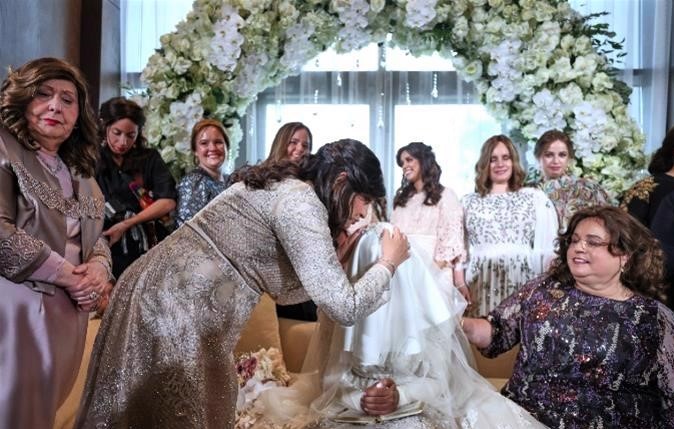 Lea Haddad’s mother prays for her during the veiling ceremony at her wedding. Credit: Jewish UAE/Christopher Pike.

The bride is the daughter of Rabbi Menachem and Batcheva Hadad, Chabad emissaries to Brussels, where her father serves as chief rabbi. Like her husband, she comes from a long line of community servants. Her grandparents, Rabbi Yeshua and Rachel Hadad, served for decades as Chabad emissaries to Milan, where her grandfather was the leader of the Sephardic Jewish community, sent there by the Rebbe in 1961 before he was married.

“As the child of Chabad emissaries, I grew up in an open home,” says the bride. “People would come at all times for a meal or just for support, and I plan to do the same in Abu Dhabi.”

Hadad received her primary Jewish education in Antwerp, followed by three years at the BMC Center, a seminary in Sainte Agathe, Quebec, near Montreal. After graduation, she returned to Brussels, where she assisted her father in providing kosher certification in the city and ran a host of communal programs. 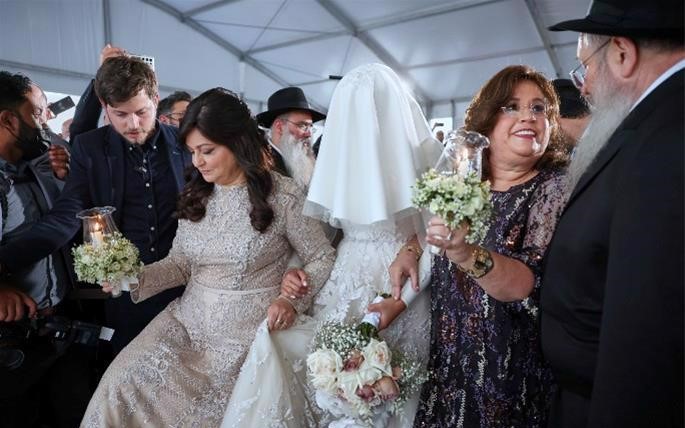 The bride, escorted by her mother and mother-in-law, encircles Rabbi Levi Duchman under the chuppah, the wedding canopy. Credit: Jewish UAE/Christopher Pike. 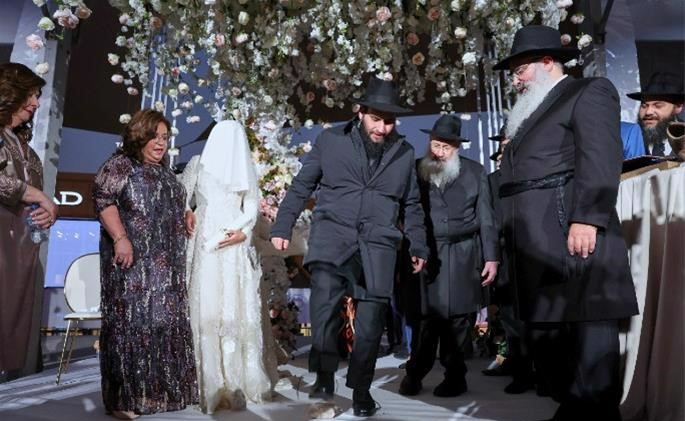 The traditional breaking of the glass. Credit: Jewish UAE/Christopher Pike.

The groom, 29, is the son of Rabbi Sholom and Feige Duchman. His maternal great-grandparents, Rabbi Bentzion and Golda Shemtov, were longstanding Chabad emissaries in the USSR and then the United Kingdom. They had married impoverished, in Siberia, where Rabbi Shemtov just finished four years of harsh labor as a punishment for the crime of teaching Judaism. A bent spoon served as the improvised wedding band, which stands in stark contrast to the wedding of their great-grandson and the welcoming environment from the government in which he has led the burgeoning Jewish community in the Emirates.

The groom’s father, Rabbi Sholom Duchman was appointed as the director of Colel Chabad by the Rebbe—Rabbi Menachem M. Schneerson, of righteous memory. Colel Chabad was founded in 1788 by Rabbi Shneur Zalman of Liadi, the first Chabad Rebbe, and is the longest-operating charity in the Holy Land. Today, it is the largest food-security organization in Israel. 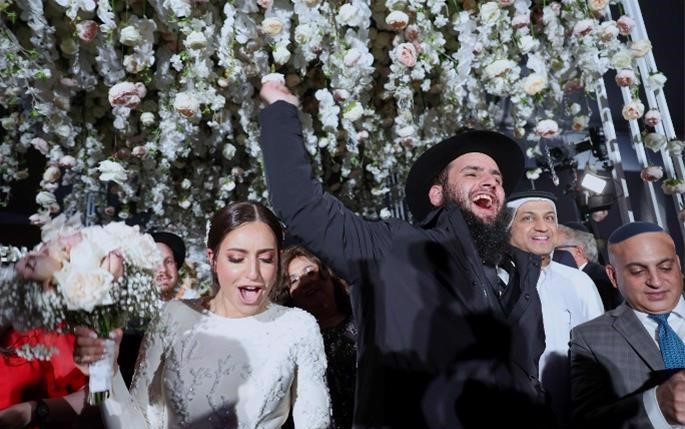 Since his teens, Rabbi Duchman, who also serves as the Chabad-Lubavitch emissary to the UAE, has been finding creative ways to engage Jews around Jewish practice and life, and with relatives serving in Chabad emissaries all over the world, it was only natural for him to spread his wings and find a place to do the same. Having learned Arabic while assisting his sister and brother-in-law, Chabad emissaries in Morocco, he moved to the Emirates back in 2014 and has since seen the Jewish community become the Arab world’s fastest-growing community.

“I’m excited to live in the UAE,” says Hadad, who plans on learning Arabic. “I look forward to supporting new families coming in and expanding our educational and social programs for those already there.” 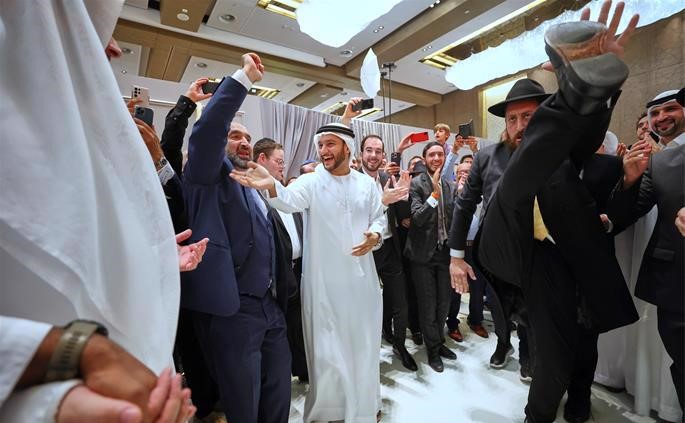 Some guests had never been to a Jewish wedding. Credit: Jewish UAE/Christopher Pike.