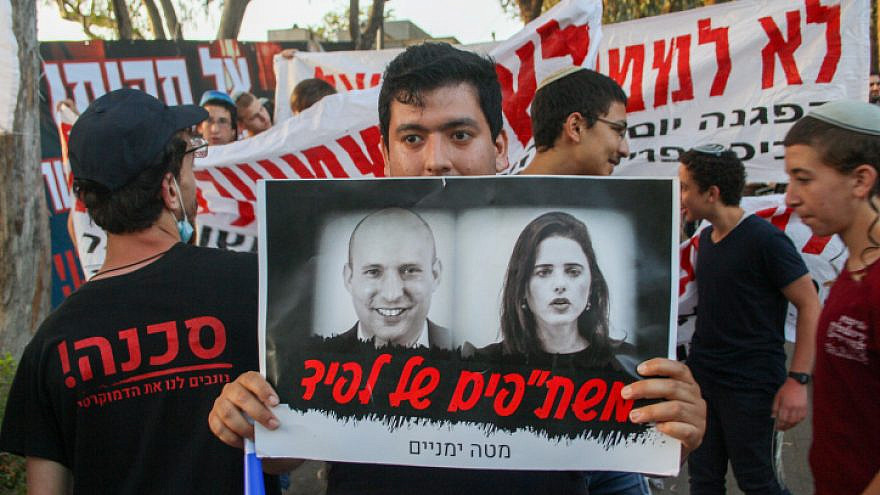 (May 31, 2021 / JNS) The Knesset Guard on Monday increased security for Knesset member Ayelet Shaked, No. 2 on the Yamina Party list, in the wake of angry demonstrations against her, according to multiple Hebrew media reports.

Hundreds of protesters gathered outside her Tel Aviv home on Sunday night, following Yamina leader Naftali Bennett’s announcement that he had decided to join a coalition with the center-left, anti-Netanyahu bloc headed by Yesh Atid chairman Yair Lapid.

Some of the demonstrators waved signs calling Bennett and Shaked “leftist traitors” and “Lapid’s collaborators.”

Shaked has been the focus of pressure from right-wing activists attempting to persuade her not to go along with Bennett in the event that he decided to join forces with the opposition and form a “change government”—the name for a coalition that excludes Israeli Prime Minister Benjamin Netanyahu’s Likud.

Bennett’s security detail was beefed up weeks ago, due to threats against him and his family. The Israel Police on Saturday night launched an investigation into social-media posts containing incitement against the Yamina chairman.

According to Kan News, one post of particular concern is a meme of the Yamina leader wearing a Palestinian keffiyeh, resembling that of the late PLO chief Yasser Arafat. The picture is headlined: “The liar.” Below it is the phrase, “Elections Now”—a reference to the left-wing organization Peace Now.

Lapid, whose mandate to form a governing coalition expires on Wednesday, offered Bennett the opportunity to serve first in a rotating premiership. According to the proposed agreement, Bennett will serve as prime minister until September 2023 and Lapid will serve for the following two years.