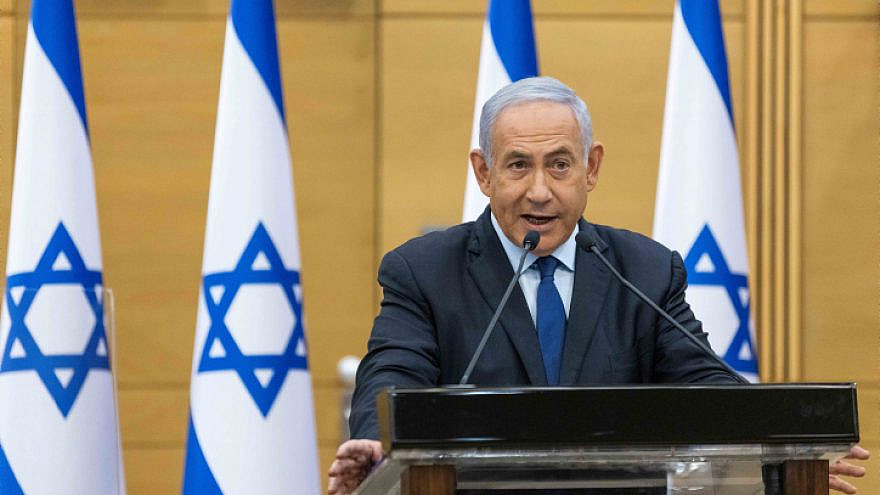 Israeli Prime Minister Benjamin Netanyahu speaks during a press conference at the Knesset in Jerusalem, on May 30, 2021. Photo by Yonatan Sindel/Flash90.
Spread the word.
Help JNS grow!
Share now:

Speaking at a Knesset press conference, Netanyahu accused Bennett of being driven solely by his ambition to be prime minister. “It’s the only thing that interests him,” he said.

Calling Bennett’s actions “the scam of the century,” Netanyahu reminded listeners that Bennett had promised repeatedly during his campaign that he would not help opposition leader Yair Lapid of the Yesh Atid Party to become prime minister. Bennett had said such an act would “contradict his values,” Netanyahu noted.

“There isn’t a person in Israel who would have voted for you if they had known what you were going to do,” said Netanyahu.

Netanyahu said there was still a way to form a right-wing government, insisting that Knesset members had told him that should Bennett join a right-wing effort they would too.

Netanyahu dismissed Bennett’s remarks earlier on Sunday that the unity government he was forming would not be a left-wing government.

“They call this a ‘unity government’ … A government with 40 left and hard-left mandates covered by a small fig leaf of parties that took votes from the right and transferred them to the left,” he said.

The government currently being formed posed a risk to the security and future of the State of Israel, said the premier.