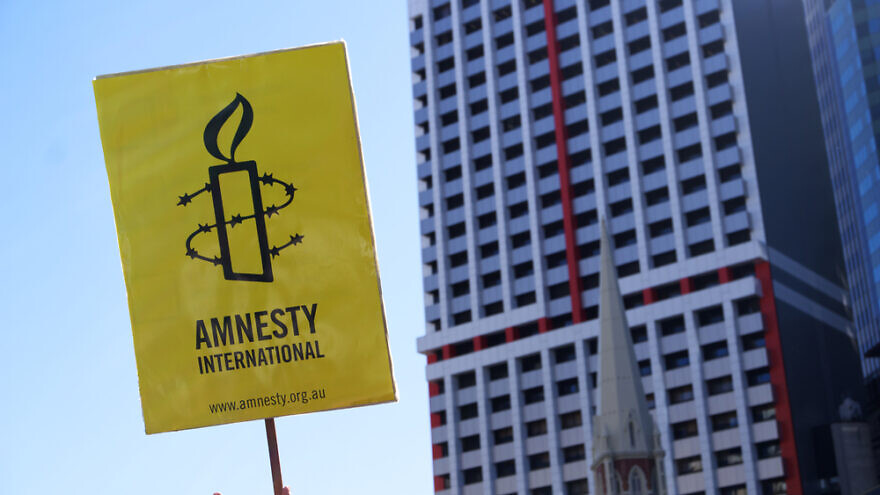 (January 31, 2022 / JNS) A new report by Amnesty International UK that is set to be published on Feb. 1 accuses Israel of “apartheid” and “institutionalized and systematic discrimination against Palestinians.” Amnesty said it has “concluded that Israel has perpetrated the international wrong of apartheid as a human-rights violation and a violation of public international law.”

The report accuses “almost all of Israel’s civilian administration and military authorities, as well as governmental and quasi-governmental institutions” as being involved “in the enforcement of the system of apartheid against Palestinians across Israel and the OPT [Occupied Palestinian Territories] and against Palestinian refugees and their descendants outside the territory.”

Israeli Foreign Minister Yair Lapid was quick to condemn the report in a press release on Monday. He said Amnesty is “another radical organization that echoes propaganda with no serious examination. Instead of seeking facts, Amnesty quotes lies spread by terrorist organizations.”

He said the accusations against Israel are “a delusion divorced from reality.”

“Israel is not perfect, but it is a democracy committed to international law and open to scrutiny, with a free press and strong Supreme Court,” said Lapid, noting that Amnesty does not make the same accusation against Syria as “an ‘apartheid state’—a country whose government murdered half a million of its own citizens—nor Iran, or any other corrupt and murderous regime in Africa or Latin America.”

“I hate to use the argument that if Israel were not a Jewish state, nobody in Amnesty would dare argue against it, but in this case, there is no other possibility,” he said.

The organization said it has based its findings on decades of field research “collecting evidence of violations of international human rights and humanitarian law in Israel and the OPT, and on publications by Palestinian, Israeli and international organizations in addition to academic studies, monitoring by grassroots activist groups, reports by U.N. agencies, experts and human rights bodies and media articles.”

The report, titled “Israel’s Apartheid Against Palestinians: Cruel System of Domination and Crime Against Humanity,” accuses Israel of “institutionalized segregation and discrimination against Palestinians, as a racial group, in all areas under its control amounts to a system of apartheid, and a serious violation of Israel’s human-rights obligations.”

Amnesty UK is not the only organization to accuse Israel of apartheid.

That report also came under heavy criticism for its anti-Israel bias, ignoring of Palestinian rejectionism, downplaying the complexities of the Arab-Israeli conflict and the application of double standards when discussing Israel.

Gerald Steinberg, president of NGO Monitor said, “For 20 years, Amnesty International has been a leader in NGO campaigns to demonize Israel, based on twisting and exploiting the evils of the South African apartheid regime in order to promote hatred. This false and immoral agenda singling out the nation-state of the Jewish people is a major cause of 21st-century anti-Semitism and is the polar opposite of the universal principles embodied in real human rights. This campaign is also a betrayal of everything that Peter Benenson, the founder of Amnesty, stood for.”

Anne Herzberg, NGO Monitor’s legal adviser added: “Amnesty’s report offers nothing new to the discussion. It is simply part of the discriminatory and offensive campaign launched in 2021, by NGOs like HRW and B’Tselem, which is based on invented law and discriminatory tropes from a century’s worth of anti-Semitic propaganda. It is clearly timed to exploit lawfare initiatives at the dictator-run U.N. Human Rights Council such as the Commission of Inquiry on the 2021 conflict.”

According to NGO Monitor, the publication “breaks no new ground and is not meaningfully different from the discredited Human Rights Watch (HRW) and B’Tselem reports from 2021, yet Amnesty says they took over four years to produce it.”

NGO Monitor also accused Amnesty of whitewashing and downplaying “the history of extreme violence directed at Israeli civilians by Palestinian terrorist organizations, including the anti-Jewish riots during the [May] 2021 conflict [with Hamas in Gaza]. Fittingly, the only mentions of the word ‘terrorist’ in the entire document utilize scare quotes for paraphrases or quotations of Israeli sources.”

The research institute also noted that the report’s release “is timed to bolster a forthcoming March 2022 report from U.N. Special Rapporteur Michael Lynk that will advance similar allegations, and influence the U.N. Human Rights Council’s Commission of Inquiry.”

“Amnesty’s recommendations are a clear call for the elimination of Israel,” said NGO Monitor.

‘Pour more oil on the fire of anti-Semitism’

Israel’s Ministry of Foreign Affairs said in a statement that the report “consolidates and recycles lies, inconsistencies and unfounded assertions that originate from well-known anti-Israeli hate organizations, all with the aim of reselling damaged goods in new packaging. Repeating the same lies of hate organizations over and over does not make the lies reality, but rather makes Amnesty illegitimate.”

Foreign Ministry spokesman Lior Hayat said in an online conference on Monday that Amnesty “never contacted us to ask our opinion on any information in the report. This shows the true goal of Amnesty, and they unfortunately lost their way.”

“This is a purely anti-Semitic report,” he charged. “This report will pour more oil on the fire of anti-Semitism taking place in the streets of Europe and America.”

The ministry’s statement added that the report “denies the State of Israel’s right to exist as the nation-state of the Jewish people. Its extremist language and distortion of historical context were designed to demonize Israel and pour fuel onto the fire of anti-Semitism.”

It called on Amnesty to “withdraw from the report which is set to be published.”

Arsen Ostrovsky, chair and CEO of the International Legal Forum, told JNS that like the HRW report, this latest one “is just the latest intensified attack in these organizations’ longstanding and relentless campaign of lawfare and vilification against the State of Israel.”

Calling the report “one-sided, libelous and baseless,” Ostrovsky called on Amnesty UK, “which has been beleaguered by charges of institutionalized racism,” to get “its own house in order first, before lecturing Israel.”

Ostrovsky lambasted Amnesty for its blatant call to dismantle the Jewish state and for writing a report that is “replete with malicious lies, gross distortions of truth and fabrications of law while peddling unhinged hate, incitement and racism.”

“There is nothing new in Amnesty’s sudden discovery of the word ‘apartheid,’ in relation to Israel,” said European Jewish Congress president Moshe Kantor. “They are in lock-step with anti-Israel and anti-Semitic activists in a coordinated diplomatic lynch against the Jewish state, and the mere concept of Jewish self-determination and collectivity.”

B’nai B’rith International president Seth Riklin and CEO Daniel S. Mariaschin also condemned the report in a statement, saying, “The reality is that Israeli Arabs sit in Israel’s current government and on Israel’s Supreme Court. They have the same right to vote as all Israelis. They have their own media. Arabic is an official language of Israel. Amnesty’s libelous claim of ‘apartheid’ is simply baseless.”

The Conference of Presidents of Major American Jewish Organizations, Anti-Defamation League, American Israel Public Affairs Committee, American Jewish Committee, B’nai B’rith International and the Jewish Federations of North America issued a statement rejecting the report, saying it “presents an unbalanced, inaccurate, and incomplete review and instead inexplicably focuses on one aim: to demonize and delegitimize the Jewish and democratic State of Israel.”

The organizations accused Amnesty of committing “a double injustice: It fuels those anti-Semites around the world who seek to undermine the only Jewish country on earth, while simultaneously cheapening and downplaying the horrific suffering that was a result of apartheid in South Africa.”

Ronald S. Lauder, president of the World Jewish Congress, also sharply criticized the report, saying: “By issuing this one-sided and blatantly politicized report which totally ignores both Palestinian acts of terrorism and Israel’s obligation to defend its citizens against such terrorism, Amnesty International UK is consciously participating in the ongoing insidious campaign to demonize the State of Israel.”