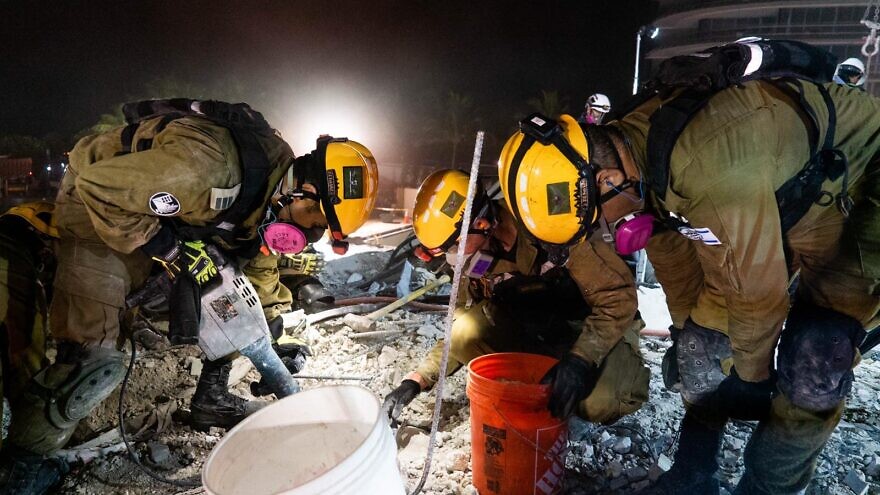 (July 1, 2021 / JNS) A rescue delegation from the Israel Defense Forces Home Front Command is using visual intelligence techniques and information received from families of the victims to precisely map out the wreckage of a condo that crashed in a Miami suburb last week.

This mapping-out method is enabling rescue teams to more quickly reach the remains of victims and identify them accurately, military representatives said on Wednesday.

In recent days, additional members of the Home Front Command joined the delegation on the ground in Surfside, Fla., including rescuers, engineers and population behavior officers.

To assist the efforts, members of an analysis team from the IDF Intelligence Directorate’s Unit 9990, which specializes in visual intelligence, built a three-dimensional map of the collapsed building. This is streamlining the process of finding missing persons at the disaster site, the IDF said.

The first Israeli delegation arrived at the disaster zone within 72 hours of the building’s collapse. Now, it is made up of 15 members, who are both helping first responders using the 3D mapping and conducting a humanitarian effort to support the families of the missing.

“The activity of the Home Front Command delegation will continue as long as needed,” said the IDF.

“In recent days, the Unit’s members have been using advanced technological capabilities to assist the Home Front Command delegation in Miami. We analyzed the collapsed building and built a three-dimensional model of the structure. Our model will allow the Home Front Command delegation to further assist in the rescue efforts and navigate through the rubble more quickly and effectively. We are grateful for the privilege and responsibility to take part in such an important international effort,” said Lt. N. (full name withheld), commander of the 9900 team on the ground in Florida. 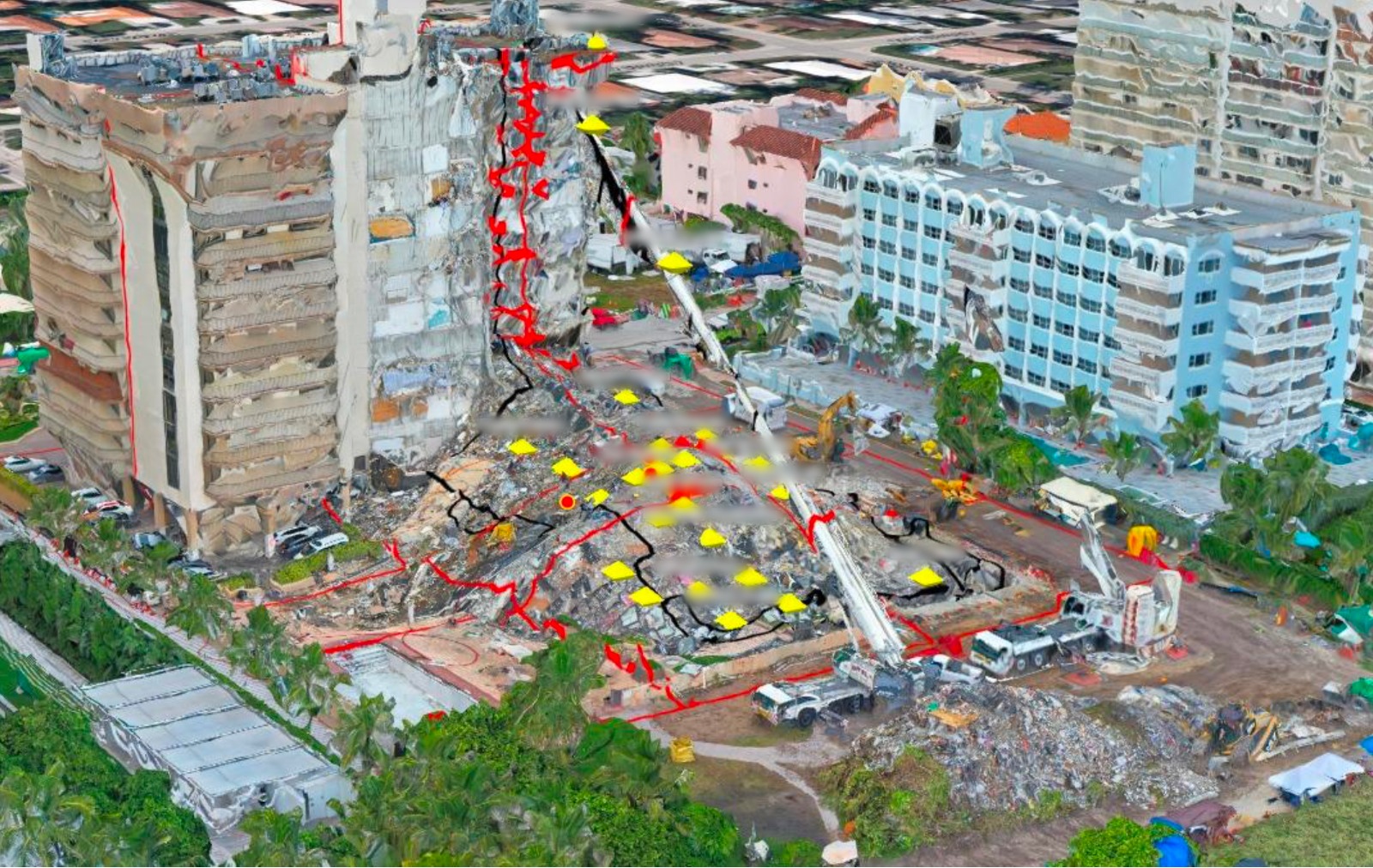 Members of an analysis team from the IDF Intelligence Directorate’s Unit 9990, which specializes in visual intelligence, built a three-dimensional map of the collapsed building. Credit: IDF Home Front Command.

IDF International Spokesperson Lt. Col. Amnon Shefler told journalists that in the hours after the initial collapse on June 25, “The whole of the Home Front Command was following events thinking what it can do, as it saw things unfold on TV. On Saturday, after being invited by the governor of Florida to send a delegation, the team was at the airport within three hours, and within two [more] hours, it took off for Miami. It landed and went directly to the site, working in two shifts of 12 hours each.”

Seven more officers then joined the team, he said. There are five American agencies working together in dealing with the complex, tragic disaster, Shefler added. “The building was 40 years old, with 12 apartments on each floor, of different sizes. There were 196 people living in the building. Due to the late hour, unfortunately, most of the people were home,” he said.

The visual intelligence capabilities are enabling rescue forces to know who was in which room at the moment of the collapse, and to know how many people to search for in each apartment.

The team has generated 12-digit coordinates of the current location of each room, meaning they have an accurate mapping estimation with a margin of error of 1 meter (3.3 feet). The analysis also created a stage-by-stage simulation of the collapse, which assists in the tracking down process of the rooms and the victims.

“Based on that, they know exactly where to find the people. The rescue teams are working very accurately, going to specific places, and making efforts to be more accurate and efficient. We can say with a lot of sadness that more bodies were found because of that,” said Shefler.

Speaking from Florida via Zoom, the Home Front Command’s Civilian Population Officer, Maj. Uri Yashfe, said he was part of the second installment of the Israeli delegation that landed in Miami on Tuesday. 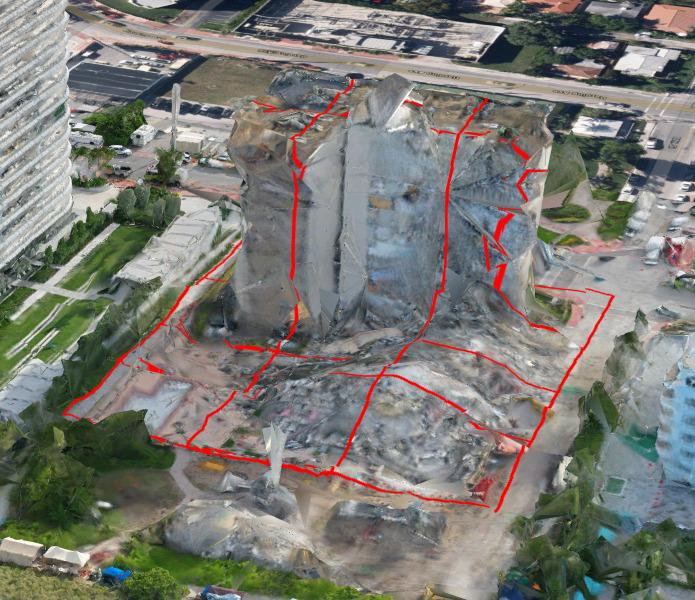 The visual intelligence capabilities are enabling rescue forces to know who was in which room at the moment of the collapse, and to know how many people to search for in each apartment. Credit: IDF Home Front Command.

The family center established by rescue services briefs relatives of the victims twice a day, and the Home Front Command team is playing a role in questioning the families to help gather information about who was located in each room of the apartment, said Yashfe.

“In addition, we are gathering information that will help us identify the people, such as what were they wearing, what did they look like, the artifacts next to them. This will help us to understand who we will reach,” he said.

The mission of the Israeli delegation, which is under the command of the head of the National Rescue Unit in the Home Front Command Col. (res.) Golan Vach, also includes assisting the Jewish community in identifying victims and survivors as well as supporting local rescue forces.

The team is using a blueprint of the collapsed building.

“The technology combined with population information techniques definitely helps identify what floor and room we arrive at,” said Yashfe, “and if we have the description from the family or photos, we compare that to what we see in the field.”