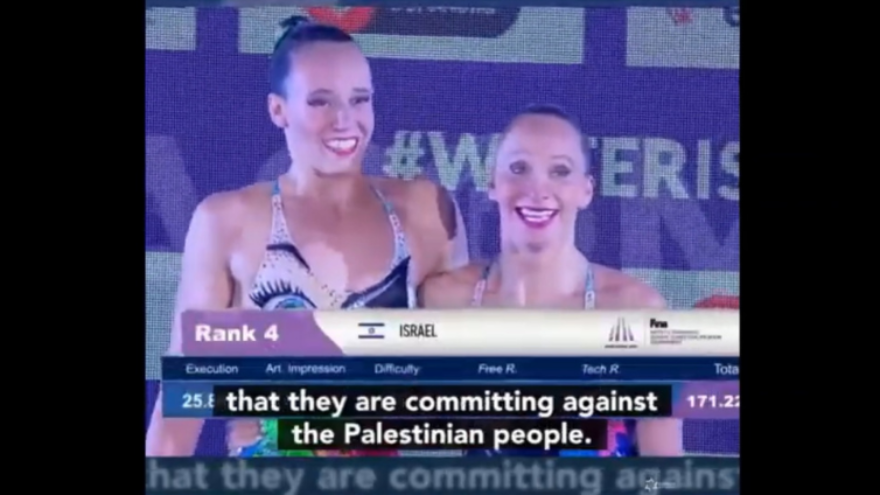 (June 28, 2021 / JNS) The Combat Antisemitism Movement (CAM) is calling for disciplinary action against a reporter from a television station in Spain who made anti-Semitic remarks during a broadcast about Israeli athletes.

TV3’s commentator Clara Basiana made the offensive remarks while reporting live on air on June 10 about Israeli artistic duet swimmers Eden Blecher and Shelly Bobritzky after they performed and awaited their results from judges at an Olympic qualifier in Barcelona.

According to a translation by CAM, Basiana told viewers in Spanish, “Beyond the technical aspects, I would like to point out that Israel’s international presence in the field of sport and culture is another strategy for the laundering of genocide and the violation of human rights that they are committing against the Palestinian people.”

She also said on air, “it seems that during these events the war crimes of the Israeli state disappear. We have to be aware as spectators and make this situation visible so as not to normalize its place in sports commentary, or general societal discourse.”

In a letter sent to Jaume Peral, CEO of the Catalyunya Comunicacio conglomerate, which includes TV3, CAM called for Basiana’s reprimanding, accused TV3 of not reporting on events factually and objectively, and insisted that the station take preventative measures to make sure a similar incident does not happen again.

The letter was sent on behalf of the alliance’s 330 partner organizations and 340,000 individual members, which include former Connecticut Sen. Joe Lieberman and human-rights icon Natan Sharansky. CAM additionally launched a public petition last week that demands disciplinary action against Basiana.