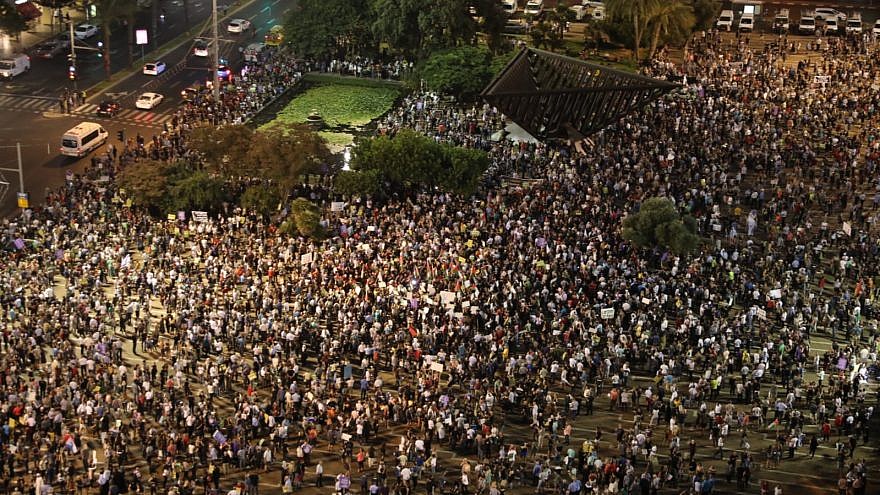 (October 27, 2022 / JNS) Arabs citizens today comprise 21 percent of Israel’s population, a significant minority. While their financial situation has dramatically improved over the last 50-plus years, the parties they send to the Knesset are largely “anti-state” in that they reject Israel’s right to exist as a Jewish state.

The problem comes to the fore every election cycle. The Central Elections Committee has attempted to disqualify one or another Arab party in every campaign since 2003. In late September, it disqualified the Balad Party over its anti-Israel platform. The Supreme Court overturned the ban on Oct. 9.

Dan Schueftan, head of the International Graduate Program in National Security Studies at the University of Haifa and the author of a Hebrew-language book about Arab Israelis, a culmination of 11 years’ research, told JNS that when it comes to Arab party platforms, “Some are more blunt, but in the final analysis the distinction is not major.”

Nearly all the Arab leaders, with the notable exception of Mansour Abbas, identify with terrorists, Schueftan said, referring to the Ra’am Party leader who last year for the first time in Israel’s history brought an independent Arab party into a governing coalition. But at summer camps of Hadash, a communist party, children are taught to idolize “a 13-year-old Arab Palestinian who took a knife, and together with his cousin went into a Jewish neighborhood to kill Jews and stabbed and chased Jewish children. This guy is their hero.”

Hadash represents the most educated and modern segment of Arab Israeli society, Schueftan said. That it embraces terrorists demonstrates “the crux of the problem, a dissonance between what the individual Arab knows and wants to do, and what the collective of the Arabs must do, because there is something profoundly wrong with Arab political culture.”

The individual Arab knows he is better off in Israel. “If you ask him anonymously, he will admit he has a good life,” Schueftan said, noting that Arab Israelis will admit it even in public opinion polls so long as they don’t have to identify themselves. “But the same people, because of their inner dissonance, which has to do with Arab political culture, will vote for people who identify with the worst enemies of the Jewish people and the State of Israel.”

What explains the dissonance? To a large extent, it has to do with the Arabs’ belief that they should be superior to Jews, Schueftan said. However, the problem goes beyond the Jews to the belief in Arab countries among competing political groups that they must dominate.

While Schueftan said culture can change, noting that Zionism represented a major shift in Jewish political culture, he doesn’t see this happening anytime soon, because Arab Israelis continue to educate their children that “Israel is an enemy because it is not an Arab state.” Those who call for increased budgets for the Arab sector thinking it will change things are naïve, he said. “They don’t understand the reality.”

Schueftan opposes legislating against the Arab parties despite their anti-Israel platforms and support for terrorists. If such parties are banned, new ones will rise in their place, and “they would refrain from saying what they’re yearning to say.” The vigorous way in which they declare their opposition to Israel actually contains the damage that they can do. “If they learn to pretend that they are something else, more people, including Jews in Israel, will be fooled,” he said.

Mordechai Kedar, an expert on Arab culture at Bar-Ilan University in Ramat Gan, agreed that there is a serious problem in Arab political culture, which he summed up in a word as “violent.” It explains why there isn’t a single significant pro-Israel Arab party in Israel, he said.

“I feel there are enough Arabs in Israel who would vote for such a party. The problem is that this party would be targeted physically by the thugs who are against the country. If you show that you’re a Zionist, there would be enough people who would kill you or burn your car or burn your home or target your children. Arab societies in Israel and elsewhere are way more violent than Western societies,” Kedar said.

Israel is faced with a dilemma. On the one hand, it doesn’t want to disenfranchise such a large minority. On the other hand, it can’t allow that minority to change the Jewish nature of the state. “You cannot have 20% of those sitting in the Knesset be against the existence of the Knesset,” he said.

According to the letter of the law, all the Arab parties should be disqualified based on their platforms, Kedar said. “Article 7(a) [of ‘Basic Law: The Knesset’] says that a person or a party which does not accept the fact that the state is Jewish and democratic cannot run for the Knesset,” he noted.

“The problem is the Supreme Court. Every judge thinks that he can interpret the law any way he wants, even to something totally different that contradicts the main text. It’s what the judge says, not what the law says,” Kedar said.

Two planks alone that all the Arab parties share would, if implemented, sound the death knell for Israel as a Jewish state: 1) the return of Palestinian refugees and their descendants, (something Zionist parties across the political spectrum agree would lead to an Arab demographic tidal wave), and 2) the demand that Israel be redefined as “a state of all its citizens.” (Israel is in fact already a state of all its citizens in that everyone has full and equal rights, but the idea here is erasing the uniquely Jewish aspects of the state.)

Even Ra’am, which is held up as a model of integration since it joined the government, is a Muslim Brotherhood-affiliated Islamist party and boasts one of the more vociferous anti-Israel platforms, calling for the release of all Palestinian prisoners (many of them terrorists), ending the “Judaization of Jerusalem” and canceling the “racist” Law of Return. That law, which grants Diaspora Jews automatic citizenship when making aliyah, is viewed as a fundamental principle, codifying the Jews’ right to live in their ancient homeland.

Kedar admitted that few pay attention to party platforms. “What shapes people’s minds is what they saw yesterday on TV,” he said. The reason Balad finds itself in front of the Central Elections Committee rather than others is that “it is easier to build a case against it. Everyday statements by its representatives provide ammunition.”

Maysoun Shehadeh of the Department of Political Studies at Bar-Ilan University, herself an Arab Israeli, agreed that political platforms aren’t of interest to the vast majority of people and it would be a mistake to put much stock in them. What Israelis need to understand is the need for Arab Israelis to express their national identity.

Shehadeh insisted that she is not saying Israel must change its Jewish nature, but rather “make room” for Arab Israelis to express their own identity. “They are not like the Jews inside Israel, nor like Palestinians in the West Bank and Gaza. Arabs in Israel have a unique and different identity,” she said.

Shehadeh pointed to the large turnout of eligible Arab voters (over 80 percent) in 2019 for the Joint List, a union of the Arab parties, as evidence of the importance Arab Israelis attach to their national identity. “The Arabs expressed their desire to be together as one collective where they can take pride in the mere fact that they’re together,” she said.

She contrasted that with the current election campaign where the Joint List has broken apart and three Arab parties are running separately: Hadash-Ta’al, Ra’am and Balad. “The existing parties do not represent the wishes of Arabs in Israel. This isn’t the situation that the Arabs wanted, to be dispersed, without mother or father, like orphans,” Shehadeh said, adding that this is the reason there will be record-low Arab turnout (polls predict as low as 40 percent).

Shehadeh says there are two poles in Arab Israeli politics. On the extreme nationalist end is Balad, which refuses to partner with the Jewish state “unless it defines itself as a state of all its citizens.”

At the other end is Ra’am, which has set the nationalist issue aside in favor of a dialogue about citizens’ rights. In the middle between the poles sit Hadash and Ta’al, which combine nationalist and citizens’ rights elements. (She noted that Ta’al defies classification given its talent for attaching to different blocs as the need arises to ensure its political survival.)

Asaf Romirowsky, Middle East historian and executive director of Scholars for Peace in the Middle East (SPME) and of the Association for the Study of the Middle East and Africa (ASMEA), sees the two poles of Arab politics differently. One embraces those who want to use Israeli democracy to destroy Israel. They couch their criticisms of Israel in democratic terms, arguing that Israel denies them equal rights and full citizenship. “They don’t actually mean it,” he said.

Some Arab leaders who sold themselves as moderate have revealed their true colors, he added, singling out Ayman Odeh, leader of the Hadash Party, who was also the leader of the Joint List alliance before its breakup. “As things moved along, you heard a different tone and viewpoint. When Odeh didn’t get what he wanted, he became more belligerent and more aggressive.”

In April, Odeh caused a stir when he called for Arab members of Israel’s security services to quit. “I call on the young people who have already joined, who are no more than 1 percent, a total of a few thousand, whose joining is insulting and humiliating, I call on them: Throw the weapons in their face and tell them that our place is not with you. We will not be part of the injustice and the crime,” he said.

The second group consists of those calling for more integration into Israeli society. But Romirowsky said that even some of these may not mean it in the way most Westerners would think, that is a minority gaining acceptance into the larger society. For such “integrationists,” it means that Israel is the one who integrates into Arab culture.

“Those arguing for another national anthem or flag would create an entity within an entity. It’s not sustainable. Look at America. It’s a melting pot where people have different ethnicities, different backgrounds, and different collective memories but they all gather under one flag. To do otherwise would raise serious questions of loyalty,” said Romirowsky.

“If you’re arguing for integration and call for such things you’re going to accomplish the exact opposite of what you say you want. You’re going to create more fragmentation,” he said. “When you say you want a recognized alternative nationality, this is an argument for the dismantlement of the architecture of the Jewish state. It basically refuses to accept that Zionism is Jewish nationalism.”