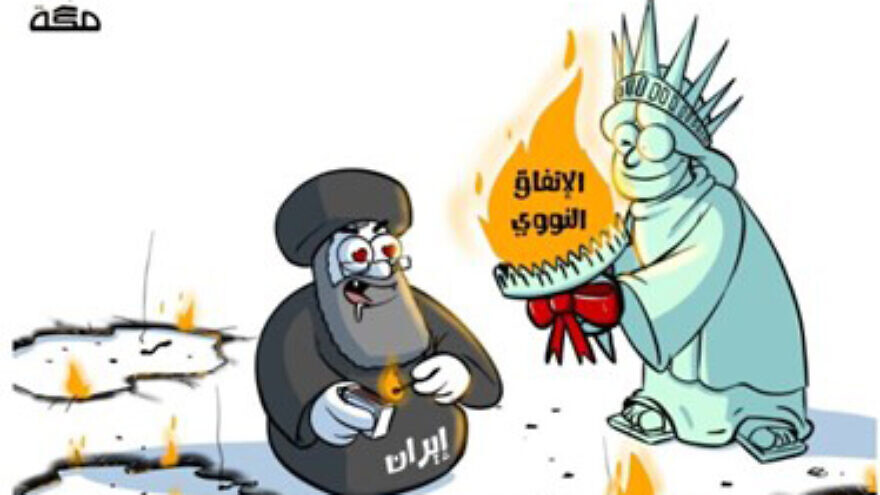 A cartoon published in Saudi daily "Makkah" on March 22, 2022. The text accompanying the image read, "Nuclear agreement—an American gift to Iran which will only serve to encourage it to continue to ignite the Middle East." Source: Makkah via MEMRI.
Republish this article
1501 WORDS
Spread the word.
Help JNS grow!
Share now:

(March 30, 2022 / MEMRI) In response to reports that the Biden administration is considering removing Iran’s Islamic Revolutionary Guard Corps (IRGC) from the list of Foreign Terrorist Organizations as part of its efforts to renew the 2015 nuclear agreement with Iran (the Joint Comprehensive Plan of Action, or JCPOA), articles in the Saudi press have attacked the administration, calling the removal an “absurd” act and a “crime” that will threaten global security.

The authors claimed that the Biden administration, like the Obama administration before it, is eager to sign a nuclear agreement with Iran even if it comes at the expense of America’s Arab allies. The IRGC, they argue, which controls Iran, is the spearhead of regional and global terror, and also operates other organizations, such Hezbollah in Lebanon, the Houthis in Yemen and the Shi’ite militias in Iraq.

Removing it from the terror list would constitute “unprecedented” support for terror and a “plot” that crosses every red line, changing the balance of power in the region and placing the Arab states, and the world at large, in direct danger.

The following are translated excerpts:

America in the Biden era is very similar to America in the Obama era in terms of the vision, policy and inclinations [of its administration]: You have to be leftist and liberal, and seek to impose your agenda on your allies and partners and attack them, and at the same time be friendly towards the enemies of the U.S. and of its allies around the world. This is political absurdity, and the policy towards the Iranian regime is the clearest example of it.

The nuclear agreement with the Iranian regime was signed in the Obama era without any consideration for the interests of the Gulf and [other] Arab states, and its only effect is to delay Iran’s military nuclear enterprise, rather than stop it. That is why former [U.S.] President Donald Trump opposed the agreement and withdrew from it, and imposed severe sanctions on the [Iranian] regime.

[But] the minute the administration of President [Joe] Biden came [to power], the American eagerness to revive this wretched agreement reemerged, and so did the attacks on the Arab states—[manifested] not only in blunt statements, but also in [America’s] regional and international policy and positions. The Arab and Gulf states did not change [their attitude] towards the U.S. It was the American positions that became more extremist and regressive and gave less consideration to the need to support [America’s] allies and maintain the partnership with them …

One urgent task the Western countries have set for themselves is to make serious efforts to rescue the Iranian regime, even without reaching a new [nuclear] agreement in Vienna, now that Russia has begun to sabotage [the negotiations] and restrain America’s eagerness to sign one. The U.S., Britain and some of their allies around the world have undertaken to pay enormous sums of money, hundreds of millions of dollars, to the Iranian regime. In one deal, Britain paid almost half a billion dollars to Iran.

After revoking the terrorist designation of the Houthi militia, [the U.S.] has [also] started talking about revoking the terrorist designation of Iran’s IRGC, which is the spearhead of [supporting] regional and international terror in the modern era, from Al-Qaeda and ISIS [Islamic State] to the Lebanese Hezbollah and the Shi’ite militias around the world. This is a direct threat and danger not only to the Arab states but to the entire world. The first to be harmed by this unprecedented support for terror and terror organizations are the Arab states and Israel. This crosses all the red lines and is an attempt to change the power balance …

There is an American and Western policy that cannot be ignored. [It is a policy] of insisting on exposing Saudi Arabia and the Emirates to the military attacks of the Iran-[backed] Houthi militia in Yemen and to its ballistic missiles and drones, [and at the same time] setting unreasonable terms for providing them with the weapons required to deal with these serious threats. These two countries are strong and have extensive international ties. They are able to compensate for any shortage and confront any danger. This [article is merely] an attempt to distinguish who is a friend and ally of America and who is not based on its position and policies, not just based on its statements … .”

Media leaks have started to clearly [indicate] that the U.S. administration means to remove Iran’s IRGC from the blacklist of foreign terrorist organizations, in return for Iranian promises to restrain the IRGC if the 2015 nuclear deal is renewed. … Removing the IRGC from the blacklist of terrorist organizations at this point will be as bad as America’s disgraceful withdrawal from Afghanistan last year.

[If this happens,] our region will remember two dates as having the greatest effect in terms of undermining its security and stability: the day a French plane took Ayatollah Khomeini from France [back] to the Tehran airport, and the day the Biden administration removed the IRGC from the blacklist of foreign terrorist organizations. If it happens, it will be a sign of real American recklessness, no less than America’s handling of the invasion and occupation of Iraq or its strategic and disgraceful mistake of withdrawing from Afghanistan the way it did.

True, the U.S. wants to withdraw from the region and turn to [dealing with] China, but this will [only] give China, Russia and Iran unprecedented power and freedom [of action]. … If this is not political recklessness, what else can we call it? Removing the IRGC from the terror list will grant Iran freedom of action in the region as part of a Russian-Chinese-Iranian alliance. The one who clearly benefits from the current war in Ukraine is China …

By lifting the sanctions on the IRGC, the U.S. administration will realize the aspirations of former president Barack Obama, who, in his famous interview with the Atlantic magazine [in April 2016], titled The Obama Doctrine, spoke about [Saudi Arabia] sharing the region with Iran. … Removing Iran’s IRGC from the sanctions list is more like a conspiracy against the entire region than a conspiracy against one specific country in it. … Lifting the sanctions on the IRGC—when Hezbollah is going wild in Lebanon and Syria, the Iran[-backed] militias are sowing destruction in Iraq and the Iranians continue to assist the Houthis in Yemen—is a crime against our region. Iran and the IRGC are responsible for the blood spilled here.”

‘U.S. Attempts To Deceive Arabs By Selling Them Baseless Promises About Restraining IRGC Are Ludicrous’

Apparently, the Biden administration has not learned a lesson from the mistake it made when it removed the Houthis from the list of terror organizations, and proof of this are the reports from various sources that it now means to remove Iran’s IRGC from the list of foreign terrorist organizations, in return for Iranian promises to restrain this powerful [force]. The most ironic thing is that the Houthis are like … Hezbollah in Lebanon and like the Shi’ite militias in Iran: all of them are arms of the IRGC and follow its orders.

The Arab indifference towards the Biden administration is growing in light of his policy in the region, which clearly repeats the mistakes of the Obama administration, that was eager to sign the nuclear agreement in 2015. In fact, Saudi Arabia, the UAE and Egypt have distanced themselves from the American policy and adopted a policy geared towards safeguarding their interests, far from the [American] policy that purports to safeguard the Arab interests but in practice does the opposite.

This Arab policy is 100% justified in light of the hypocrisy and lies of the Biden administration, which can no longer deceive anyone now that reports have been leaked that it intends to delist the IRGC … and [also] to announce [the signing of] a nuclear agreement [with Iran]. The countries of the region obviously do not trust Iran to adhere to this agreement. They are convinced that Iran will in no way restrain the IRGC, for the simple reason that it is the IRGC controls Iran and implements the ideology of the ayatollahs’ regime. The IRGC is the ruler, not the ruled!

Has Iran complied with its commitments in the 2015 nuclear agreement? Did that agreement restrain the Iranian ayatollahs’ mad rush to manufacture a nuclear bomb? The answer— without even pausing to think—is clearly no. Today, when the Biden administration is trying to deceive the Arabs and sell them false promises about restraining the IRGC in the region, this arouses contempt and scorn … .”

This article was first published by the Middle East Media Research Institute (MEMRI).