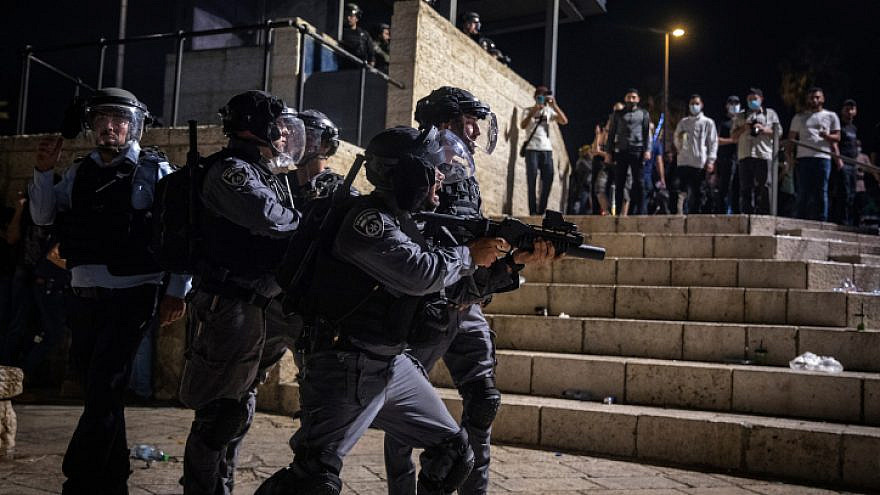 (May 9, 2021 / JNS) Unrest continued in Jerusalem on Sunday morning, as Arab protesters attacked Israeli police in the Old City following dawn prayers on the Temple Mount, hurling stones and chanting: “With spirit and blood, we’ll redeem you, Al-Aqsa!” The Red Crescent reported that 10 people were injured in the resulting clashes.

On Saturday night, some 80,000 Muslim worshippers gathered at the Al-Aqsa Mosque to mark Laylat Al-Qadr, the holiest night in the month of Ramadan. Earlier in the evening, hundreds of rioters hurled bottles and rocks at Israeli security forces. One police officer was hit in the face by a stone, suffering light injuries. Police responded with non-lethal riot dispersal methods, including stun grenades and water cannons.

Ninety people were injured in the clashes with 16 being evacuated to hospital, according to the Red Crescent.

The recent round of violence erupted on Friday evening, when following evening prayers, thousands of Arabs began throwing stones and launching fireworks at Israeli police forces. In response, security forces entered the Temple Mount compound to quell the disturbance and restore order. Eighteen officers were injured in clashes, several of whom were evacuated to the hospital for treatment, the police said in a statement. Some 200 Arabs sustained injuries, eight of whom were evacuated to hospital, according to the Red Crescent.

Also on Saturday, two people were also arrested for pepper-spraying police officers in the city’s Sheikh Jarrah neighborhood, where clashes have been ongoing. Tensions in the neighborhood have been fueled by a legal dispute between Arabs and Jews over the ownership of several homes in the area.

Following an assessment of the situation in the capital, Police Commissioner Kobi Shabtai on Saturday ordered Jerusalem-area police commanders to boost their forces in preparation for “Laylat al-Qadr” and “another series of events expected in the city in the coming days,” apparently a reference to Jerusalem Day, which begins on Sunday evening.

“I stress that the right to protest will be safeguarded, but rioting will be met firmly and with zero tolerance. I call on everyone to act with responsibility and with restraint,” he said.