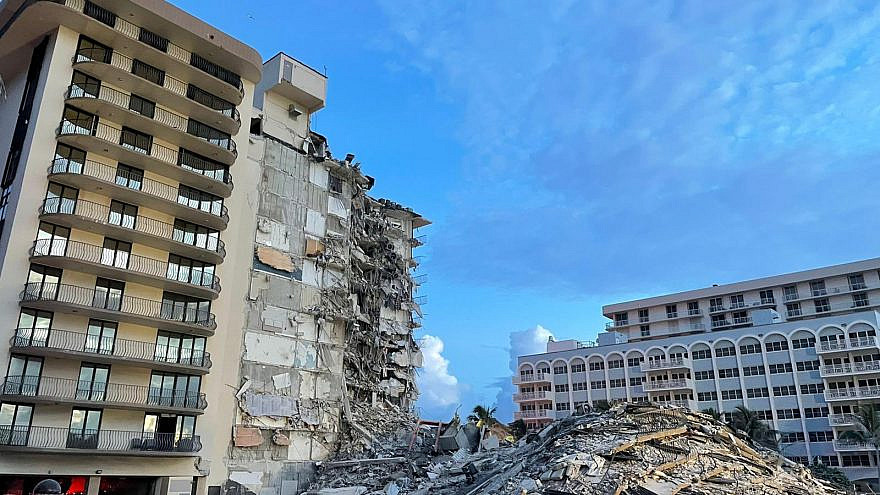 (June 25, 2021 / JNS) While the wait continues for word on those missing after Champlain Towers South, a condominium in the heavily Jewish area of Surfside, Fla., partially collapsed on Thursday morning, area Jewish groups are stepping in offer support and comfort to the community and to family members who have arrived to the area seeking news.

As of Friday morning, four people had been confirmed dead, and the number of people unaccounted for had risen to 159, after 55 of the 130-plus units collapsed without warning. The missing include citizens of other countries and residents of other cities.

Israel Consul General to Miami Maor Elbaz-Starinsky posted on Twitter before dawn on Friday: “We arrived at the scene 24 hours ago and haven’t left since. The team of @IsraelinMiami is doing its utmost to help the community, the authorities and the families.”

Earlier, he had posted a tweet saying, “We are stronger together. We’ll be around as long as it takes, supporting and in solidarity with this amazing community and people. Our friendship is solid and everlasting.”

Elbaz-Starinsky also put up photos of himself with members of Hatzalah of South Florida, the Jewish volunteer emergency-services organization that has been on seen since word got out that the building collapsed.

U.S. President Joe Biden made an emergency declaration on Friday giving FEMA and the Department of Homeland Security the power to coordinate disaster-relief efforts. He also spoke with Florida Gov. Ron DeSantis, who said that the he and the White House are “stepping up to help people who are in need.” 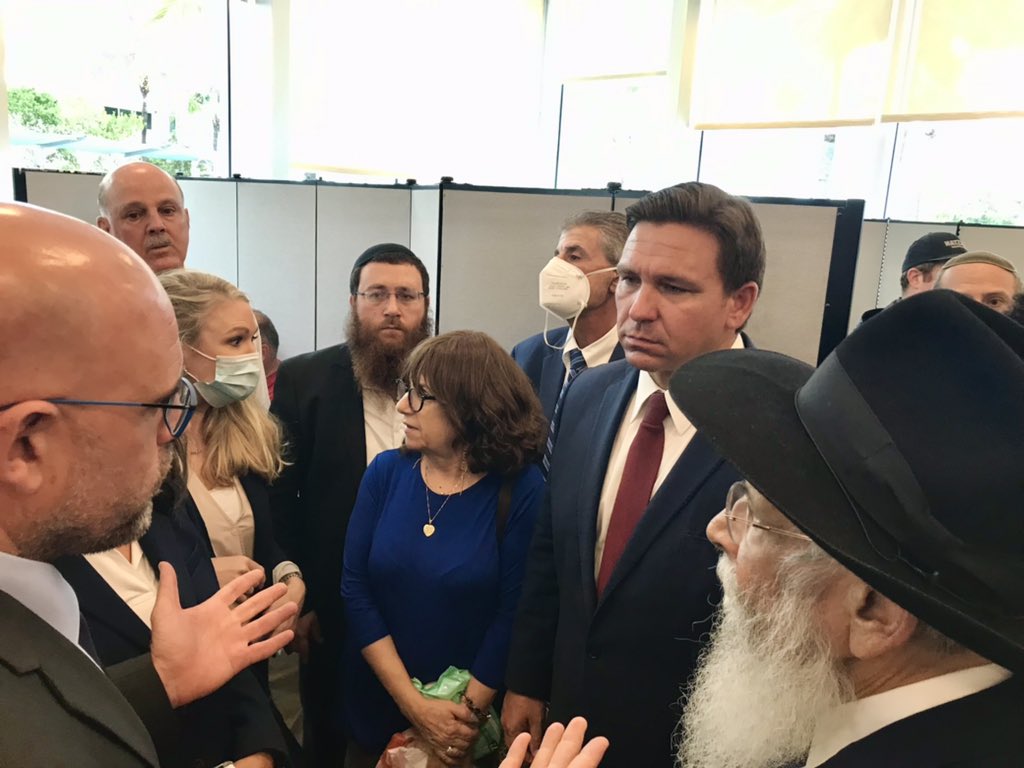 Hatzalah is currently mandating a shift schedule to allow its members to get some rest.

“A lot of our people devote themselves to the community, and if we don’t limit their shift,” they will work day and night, said Andre Roitman, one of Hatzalah of South Florida’s coordinators. “We have 70 members in South Florida and are maintaining eight to 10 members at night and 20 to 25 responders during the day.”

Roitman, who himself had been working 20 straight hours and has a missing friend in the building, said Hatzalah’s role has evolved over the last day and half, divided by phases. In phase one—in the immediate aftermath of the collapse, as people were being removed from the building—they were triaging and providing medical care.

Phase two the next morning had Hatzalah treating or referring people who were evacuated from nearby buildings; some were complaining had missed their daily medicine or were not otherwise feeling well.

They are now in phase three, said Roitman, with members divided—some on site and others stationed at the family reunification site, treating people there.

“As the anxiety goes up and family members crowd into the center, you see people who are fainting, having chest pains or dizziness,” he said. “Patient care is focused not only on medical side, but the mental and psychological well-being of the family members.”

The Jewish Federation of Greater Miami and its partner organizations, Jewish Community Services of South Florida and Mishkan Miami: The Jewish Connection for Spiritual Support, are providing financial assistance, chaplaincy support, crisis counseling and social services to people impacted by the tragedy. They have established a fund to help with expenses, and Jewish federations elsewhere have been sharing that link with their members.

The Young Israel of Bal Harbour and The Shul of Bal Harbour were serving as collection sites for much-needed supplies for the families of those missing and for people who have been displaced. Because of the massive outpouring of support, they are no longer collecting specific items, though emergency funds are being raised to help with financial needs.

More than a dozen kosher restaurants in the area have been delivering meals for the emergency personnel, volunteers and relocated families, as well as to the family reunification center.

While much focus has been placed on ways people can help those most effected by the disaster—donating to various charities set up to the help the victims, praying, reaching out to friends and family who may be impacted—Chai Lifeline points out that people also have to check in with their own family, particularly how children are handling the news, even if they don’t live anywhere near Surfside and are not directly connected to events there.

“When crises strike, it’s only natural to react with feelings of fear, confusion and helplessness,” said Chai Lifeline CEO Rabbi Simcha Scholar. “Addressing the worries of our children can be a particular challenge, but it’s critical that we provide them with accurate information alongside a sense of real security and ample space to express their feelings.”

To that end, Chai Lifeline’s Project Chai is making available tips and guidelines on “Helping Friends and Family in Times of Loss” and “How to Talk With Children During a Crisis.” The Project Chai Crisis Intervention Team also has a 24-hour crisis hotline for people directly impacted by the collapse.

‘We must remain engaged and focused’

Additionally, Jewish groups have been expressing general sentiments of support to those on the frontlines.

“As an organization dedicated to healing the world, Hadassah, the Women’s Zionist Organization of America, Inc., sends its support and sympathy to the families impacted by the tragic condominium collapse in Surfside, Miami,” said Hadassah’s national president Rhoda Smolow and executive director/CEO Janice Weinman in a joint statement. “Our prayers go to those missing with the hope that they will be rescued quickly, and to those injured, we extend our hope for a speedy recovery. Our sincerest condolences to those who have lost loved ones. May their memory be for a blessing!”

Agudath Israel of America noted that “this is a time for achdus [‘unity’] and tefillah [‘prayer’] for the safety of those still trapped. Our hearts go out for those lost, injured and for those still awaiting news of their relatives’ status.” The organization also included a listing of missing individuals and a request for people to pray for them.

Agudath’s South Florida director, Rabbi Moshe Matz, added, “Our office has fielded many calls of concerned family members and friends searching for information about their loved ones, for guidance and for support. The pain and fear is heartbreaking, and we share in their sorrow. As the hours and days ahead continue to bring many challenges and show the significant needs that will need to be met for the survivors and their families, we must remain engaged and focused.”

In its statement, the National Council of Young Israel said, “We hope and pray that the dedicated first responders at the scene are able to locate additional survivors, and we extend our heartfelt condolences to those families who have sadly lost loved ones. The Jewish community has endured far too many calamities over the past year, and we encourage everyone to engage in prayer and perform acts of benevolence with the hope that we will be spared from any further hardship.”

“We urge people to give what they can to those individuals and families whose lives have been impacted by this horrible catastrophe,” the statement continued. “They need our love and support, and it behooves all of us to be there for them.”