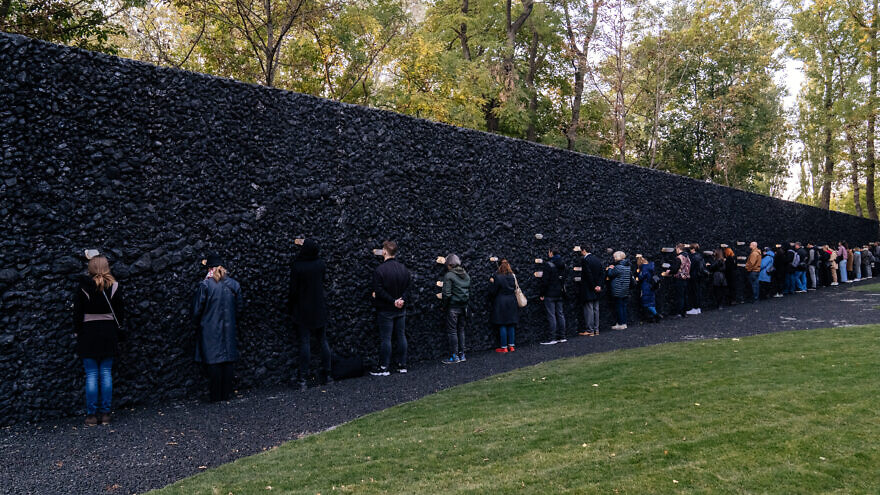 “The Crystal Wall of Crying,” an installation by sculptor Marina Abramovich at Babi Yar in Ukraine, is made of anthracite and rock quartz crystals that light up at night. Credit: Photographers Archive (The Gate).
Republish this article
1500 WORDS
Spread the word.
Help JNS grow!
Share now:

(October 8, 2021 / JNS) “No monument stands over Babi Yar.” These are the first words of Yevgeni Yevtushenko’s famous 1961 poem which helped further catapult the story of Babi Yar into the public consciousness.

The historical site of Babi Yar, where 33,771 Jews were killed one by one in just two days on Sept. 29-30, 1941 by the Nazis and their Ukrainian collaborators, is almost unrecognizable compared to how it looked 80 years ago. While once there was a massive ravine with multiple gullies branching off to the sides, today the area is a flat park with trees, walkways and benches. For years, visitors could not have known that more than 100,000 people had been brutally murdered at the site because few markers, if any, made mention of the atrocities that occurred there. In 1962, the Soviets filled in the ravine to erase the past. For the Communist regime, World War II was meant to be remembered as a Soviet victory—not a national tragedy and certainly not a Jewish one.

According to researcher Aleksandr Burakovskiy, the name Babi Yar first appeared in 1401 when the owner, Baba Shynkarka (“old woman tavern owner”), sold her land to a monastery. The ravine, or yar, at the bottom of her land was 2.5 kilometers long and 50 meters deep.

Burakovskiy wrote a paper titled, “Holocaust remembrance in Ukraine: memorialization of the Jewish tragedy at Babi Yar,” in which he describes the struggle to commemorate the atrocity. “For post-war Soviet ideologues, recognition of the Holocaust went against all tenets, a principal one of which was the creation of a ‘Soviet people’ and an aggressive companion strategy of eliminating all national, ethnic, or religious distinctions and identities. In the years after the war, recognition of the Holocaust, and of the murder of Jews at Babi Yar as integral to the Holocaust, would have required acknowledging that Germany conducted a war not only against the Soviet people but conducted a separate war specifically against Jews.” 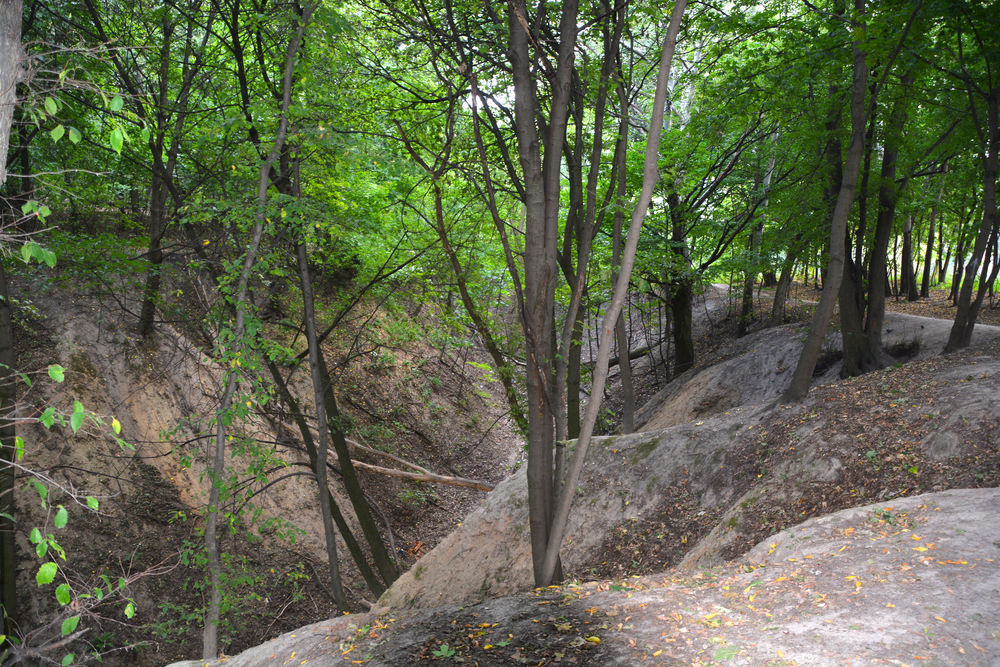 The ravine at Babi Yar in Ukraine, the site of a September 1941 massacre carried out by German forces and Ukrainian collaborators during their campaign against the Soviet Union in World War II. Credit: Meunierd/Shutterstock.

Over the years, a number of attempts were, in fact, made to commemorate the victims—most of whom were Jewish, though thousands of Roma, mental patients, POWs, Soviet prisoners and Ukrainian dissidents were killed there as well by the Nazis.

According to the Foundation Memorial to the Murdered Jews of Europe based in Berlin, “upon pressure exerted by survivors and from abroad, a memorial was dedicated in September 1976, the 35th anniversary of the murders. But since the park from the 1960s sits on top of the site of the ravine, the authorities set up the memorial further away from Babi Yar and marked the former outline of the ravine with dug-out channels. The inscription on the memorial does not mention Jewish victims.”

As Burakovskiy notes, “until 1961, the silence around Babi Yar was quite successful. However, with the publication of Evtushenko’s poem and the unexpected landslides of gravel and cement slurry that broke through a holding dam and poured into the ravines around Babi Yar, the silence was broken. After 1961, for the next three decades, it was possible to speak about Babi Yar and commemorations of the dead began, although the previous position not to recognize the specifically Jewish aspect of Babi Yar continued. Since Ukrainian independence in 1991, with the exception of the commemoration of the 50th anniversary of the tragedy, the positions of leading government officials regarding Babi Yar and its place in the European Holocaust has continued to be one of minimization.”

No central memorial or information center at site

Indeed, in 1991, on the 50th anniversary of the atrocity, the first official Ukrainian commemoration ceremony dedicated to the Jewish victims of Babi Yar took place, and an inscription to honor the murdered Jews of Kiev (Kyiv) was added. A stone menorah was set up in the vicinity of the former ravine. Since then, several different memorial sculptures, crosses and signs have been erected at the site. For instance, in 2001, a statue was placed in the memory of the murdered children, and in 2016, a memorial in the form of a Roma wagon was installed to honor the Roma victims. 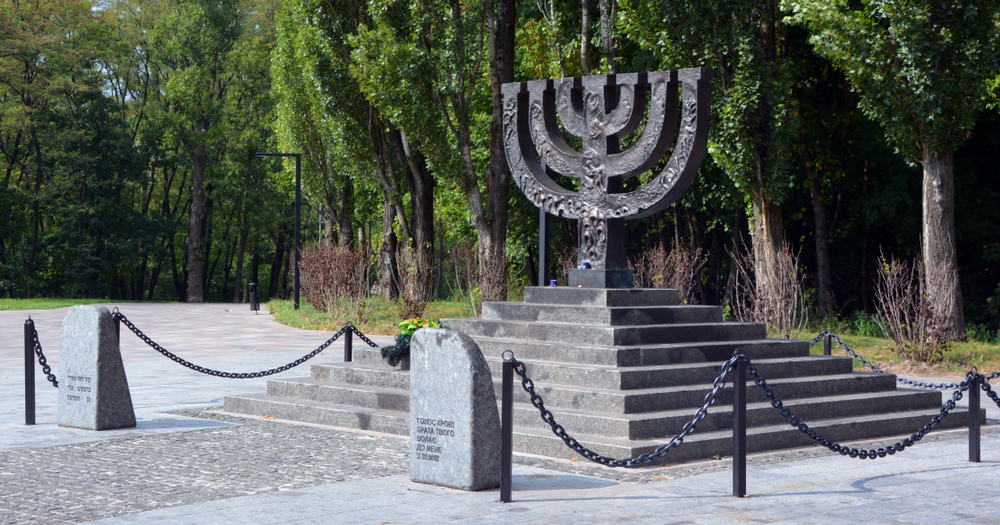 A memorial at Babi Yar in Ukraine, the site of a September 1941 massacre carried out by German forces and Ukrainian collaborators during their campaign against the Soviet Union in World War II. Credit: Meunierd/Shutterstock.

However, there is no central memorial or information center at the site. This is set to change in 2025 when the Babyn Yar Holocaust Memorial Center (BYHMC) is due to open.

Many of the center’s original creative advisory team members resigned in 2019 to protest the approach of the art director, Ilya Khrzhanovsky who has been accused of planning displays “in which visitors would find themselves playing the role of victims, collaborators, Nazis or prisoners of war who were forced to burn corpses.”

According to a former director of the project, Khrzhanovsky wants to bring his hyper-realistic cinematic style to the museum and make it a “Holocaust Disneyland.”

Adding to the controversy, Khrzhanovsky has also been accused of abusing actors related to movies in his “Dau” series over more than a decade to recreate, as close as possible, the harshness of life under the Communist Soviet regime.

Dozens of Ukrainian artists and historians penned an open letter demanding his dismissal from the project, but the center has stood by him.

Compare how it looked 80 years ago

Notwithstanding the criticism and some shake-ups on the creative side, four new art installations now exist at the site and will be incorporated as part of the future center.

At one of the entrances to the park, four large boulders are situated in key locations. Through a special lens embedded in the rock, visitors can view a historical photograph—evidence of the Babi Yar atrocity. The boulders, with the photographs inside, were mounted at the precise locations, using three-dimensional mapping technology, where a German photographer photographed them in 1941. Viewers are able to peer back on a terrible past and compare how the exact site looked 80 years ago to how it looks today. 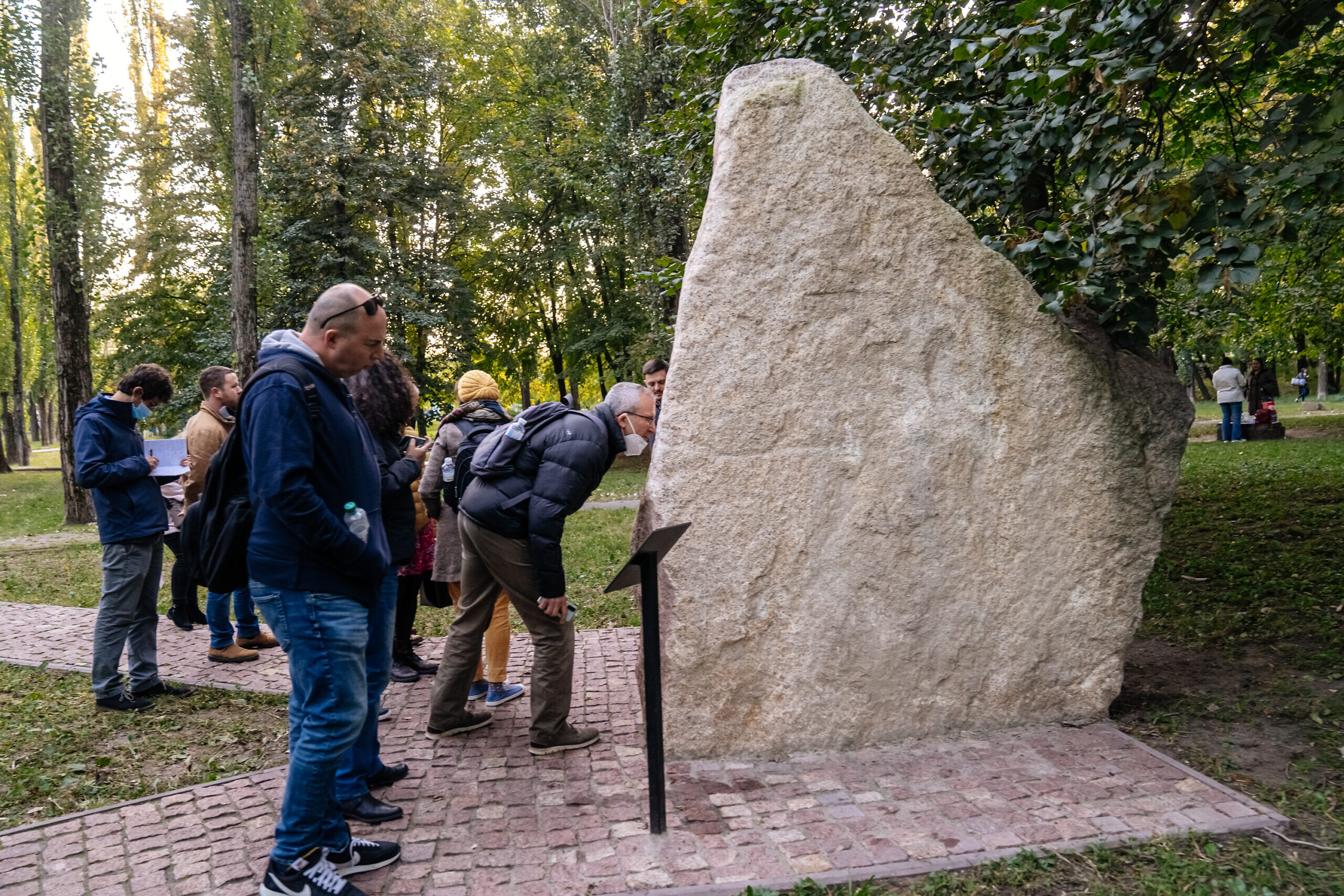 Through a special lens embedded in the rock, visitors can view a historical photograph, evidence of the Babi Yar atrocity. Credit: Photographers Archive (The Gate).

“The Crystal Wall of Crying,” an installation by sculptor Marina Abramovich, is made of anthracite and rock quartz crystals that light up at night. Small streams of water flow downwards, which gives the wall its “crying” appearance. Visitors can reflect on the tragedy as they stand next to the crystals, which are placed at the level of the head, chest and abdomen. Interaction with the crystals is aimed at restoring the connection of private memory with collective memory through the sensations of the body. The wall symbolically acts as an extension of the Western Wall in Jerusalem. According to the artist, if you extend the Western Wall to Kyiv on the map, it will pass through Babi Yar with an accuracy of 10 meters.

The “Mirror Field” audio installation, made entirely of stainless steel, is a structure that features a podium is in the form of a large mirror disk with a diameter of about 40 meters, with 10 six-meter-high columns resembling destroyed trees installed on it. The mirrored “trees” and podium were shot with bullets of the same caliber as those used by the Nazis in the massacre. There are 33,771 bullet holes to represent each Jewish victim. 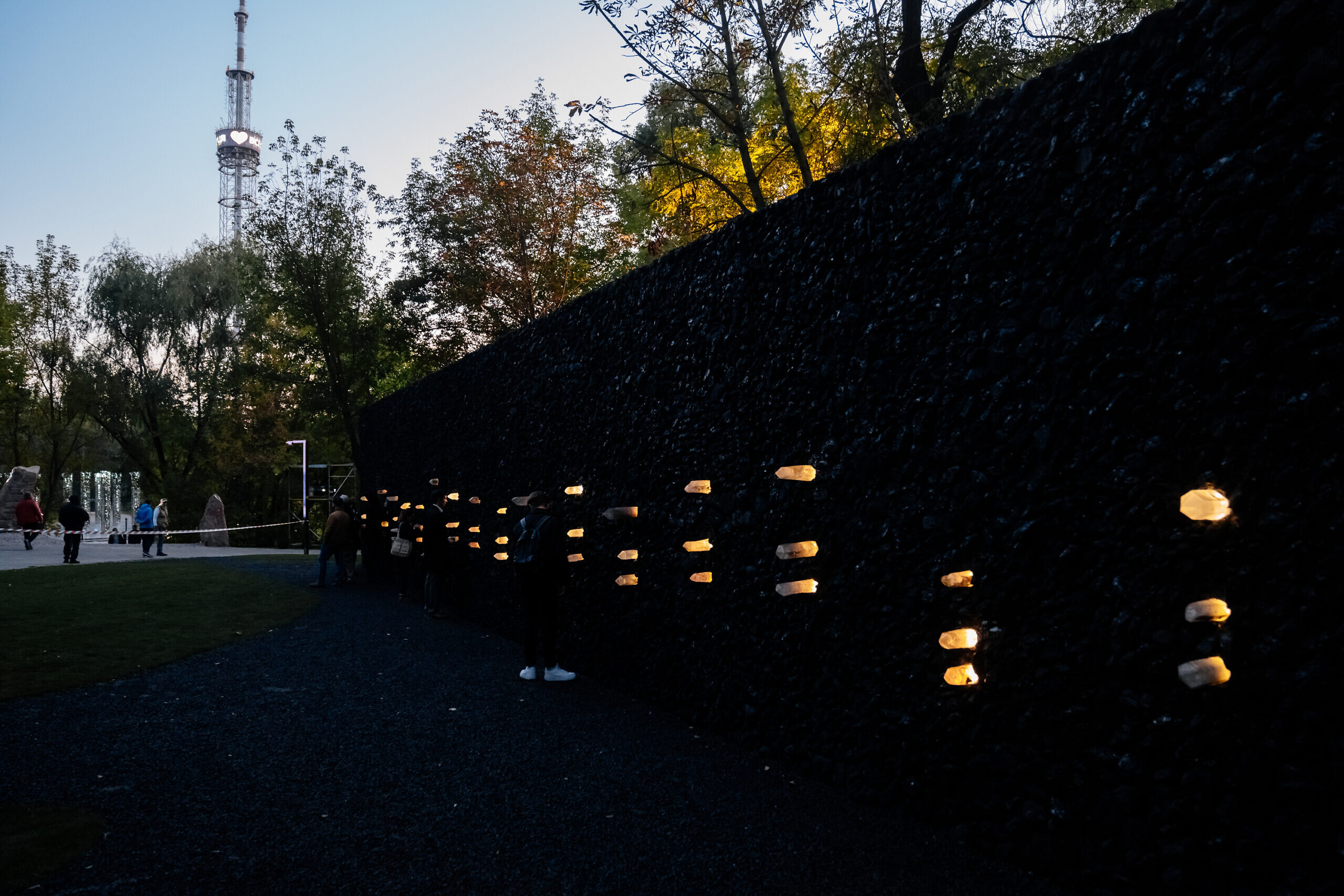 “The Crystal Wall of Crying,” an installation by sculptor Marina Abramovich at Babi Yar in Ukraine, is made of anthracite and rock quartz crystals that light up at night. Credit: Photographers Archive (The Gate).

During the day, the installation reflects the sky; at night, light and sounds of memory pass through the bullet holes, while rays from the tops of the columns illuminate the sky. An electroacoustic organ of 24 pipes is built into the podium. An algorithm for translating the names of the victims into sound was developed specifically for this project. Each letter in the Hebrew alphabet was assigned its own number. According to the Gematria principle (which computes the numerical value of words, based on those of their constituent letters), the names of the victims have been translated into numbers, which, in turn, set the pitch of the sound. The combination of audio waves of the same numbers creates a sound composition. The main background is overlaid with archival recordings of pre-war Kiev, as well as unique Yiddish songs of the 1920s and 1930s restored by the Institute for Information Recording of the National Academy of Sciences of Ukraine. Choral and memorial Christian music, Ukrainian and Roma memorial songs and works by contemporary Ukrainian composers are performed as well.

Another exhibit, titled “Place for Reflection,” features a small synagogue inspired by the design of a children’s pop-up book. The structure opens and closes like a book using a special mechanism, revealing the interior. The synagogue is made of oak wood, all of which was collected from old, abandoned buildings from many regions of Ukraine. 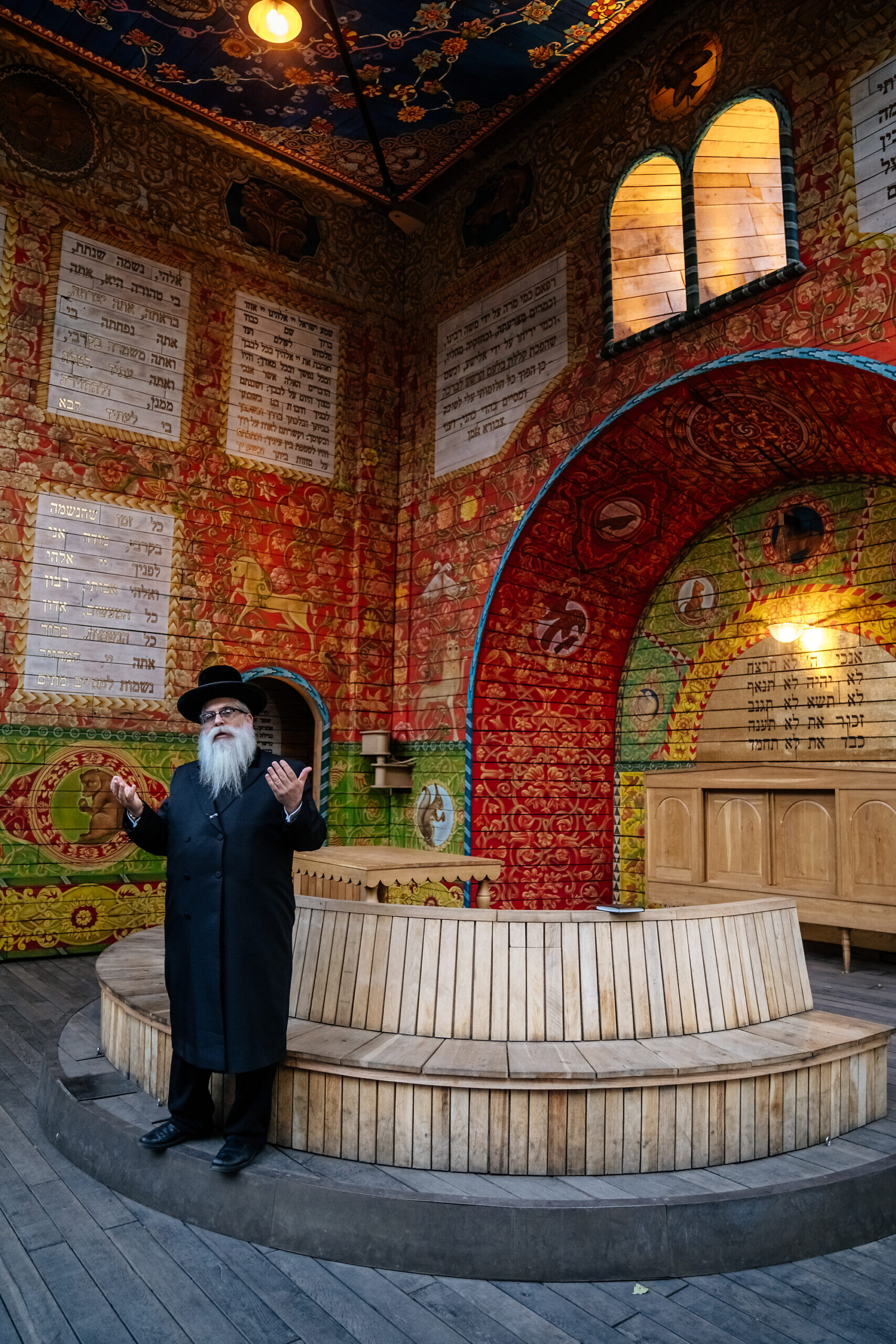 Another exhibit at Babi Yar in Ukraine, titled “Place for Reflection,” features a small synagogue inspired by the design of a children’s pop-up book. Credit: Photographers Archive (The Gate).

The walls are decorated with patterns and texts of prayers that repeat the traditional painting of synagogues in Ukraine destroyed during the war. The ceiling looks like a map of the northern stellar hemisphere and reproduces the position of the stars on Sept. 29, 1941, the first day of the mass shootings. The symbolic synagogue is located on a small area behind the menorah monument at the edge of one of the last remaining visible parts of the ravine.

With these art installations and the building of the new center, which commemorate the victims of the Babi Yar atrocities with a special focus on the Jewish victims, Yevtushenko’s poem can now read, “A monument stands over Babi Yar.”