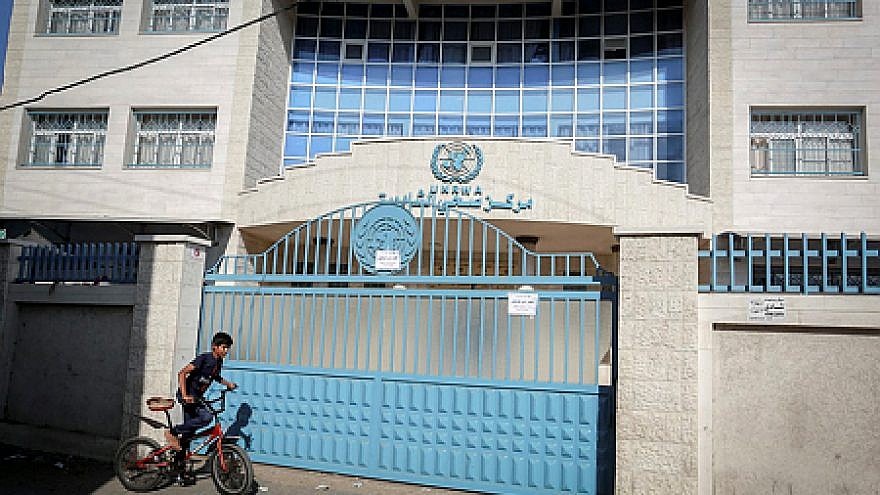 A Palestinian boy pedals by the closed offices of U.N. Relief and Works Agency (UNRWA) during a strike of all UNRWA institutions in Rafah in the southern Gaza Strip on Sept. 24, 2018. Credit: Abed Rahim Khatib/Flash90.
Spread the word.
Help JNS grow!
Share now:

(April 8, 2021 / JNS) The United States announced on Wednesday that it is working with Congress to drastically increase aid to the Palestinians, including renewing aid to the U.N. Relief and Works Agency (UNRWA), which deals primarily with Palestinian refugees.

The decision to renew aid to UNRWA was quickly criticized by Gilad Erdan, Israel’s ambassador to the United States and the United Nations.

“Israel is strongly opposed to the anti-Israel and anti-Semitic activity happening in UNRWA’s facilities. We believe that this U.N. agency for so-called ‘refugees’ should not exist in its current format,” he said. “UNRWA schools regularly use materials that incite against Israel and the twisted definition used by the agency to determine who is a ‘refugee’ only perpetuates the conflict.”

Erdan added that financial aid should be conditioned on certain reforms being carried out.

U.S. State Department spokesman Ned Price dismissed the criticism, saying that it took oversight of UNRWA “extraordinarily seriously,” and that it would now have “a seat at the table.”

U.S. Secretary of State Antony Blinken said in a statement that the aid includes $75 million for economic and development in the West Bank and Gaza, $10 million for peacebuilding through USAID and $150 million through UNRWA.

The newly announced funds come in addition to the $15 million announced last month for coronavirus relief.

The Republican Jewish Coalition released a statement saying that the new funds amount to “money-laundering of U.S. tax dollars for terrorism.”

The group added that “President Joe Biden and Secretary of State Antony Blinken have taken the U.S. right back to the feckless Mideast policies of the Obama-Biden years that failed to deliver peace.”

It is expected that some members of Congress will object to the new funding.