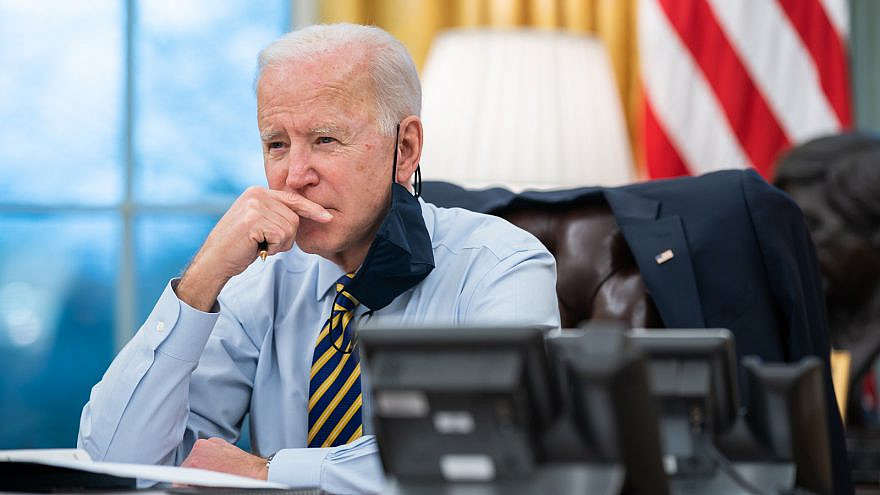 (April 7, 2021 / JNS) In recent days, the Biden administration has moved rapidly to restore funding to the Palestinians that had been largely severed during the Trump administration.

Concerns are being raised, however, that the funding could both violate existing U.S. law, while also rewarding bad behavior by the Palestinian leadership through their continued support of terrorism, their targeting Israel in international forums such as the International Criminal Court, and perhaps most importantly in terms of optics, their refusal to even sit down with Israelis or Americans and engage in the peace process.

Last week, the Biden administration said that it would allocate $90 million in aid to the Palestinians, with $75 million going to short-term projects to rebuild U.S.-Palestinian relations and $15 million for coronavirus relief.

Additionally, U.S. Secretary of State Antony Blinken announced on Wednesday plans to restart funding for UNRWA, the U.N. agency that deals with Palestinian refugees. This would include $150 million in direct financial aid to UNRWA, $75 million in U.S. economic support and $10 million in development funding.

Asaf Romirowsky, executive director of Scholars for Peace in the Middle East, told JNS that the decision to restore funding to UNRWA is a “serious mistake.”

“UNRWA remains a mainstay of Palestinian rejectionism, characterized by advocacy for the ‘right of return.’ Accountability and transparency are hard to come by at UNRWA, given its monopoly over Palestinians,” he said.

Jonathan Schanzer, senior vice president at the Foundation for Defense of Democracies, told JNS that while it appears that the initial aid was designed to help the Palestinians deal with the ongoing pandemic, the additional aid could run into serious legal hurdles.

“There are clear indicators that the Biden administration seeks to widen the aid to include UNRWA or even broader support. It’s the widening support that could create complications, particularly with certain American laws in the books, including laws that Biden himself helped pass,” he said.

Indeed, while the new administration—not even in office for its first 100 days—noted that the U.S. aid would bypass the P.A. and go directly to charities in the West Bank and Gaza Strip, additional monies could run afoul of the Taylor Force Act, which prohibits funding to the P.A. as long as it provides stipends for terrorists or their families. It has been reported that Biden will likely hold off on direct economic aid to the P.A. while it determines how to navigate any legal obstacles. UNRWA staff members protest against cuts in financial aid outside the agency’s offices in Gaza City on April 14, 2019. Photo by Hassan Jedi/Flash90.

“The TFA [Taylor Force Act] stops aid that directly benefits the P.A., with limited exemptions for hospitals vaccines and water treatment,” explained Sander Gerber, CEO at Hudson Bay Capital and a fellow at Jewish Institute for National Security Affairs (JINSA). “Given that Abbas has recently taken control of Palestinian NGOs, it hard to see the PA won’t gain a benefit from US aid.”

Gerber, who helped craft the Taylor Force Act, told JNS: “The point is that money is fungible, and if the P.A. saves money, it can spend it on terror. The Taylor Force Act seeks to stop using U.S. taxpayer dollars in money laundering for terror.”

The Biden administration also appears to be moving towards reopening the PLO Mission in Washington, D.C. Former President Donald Trump shuttered the mission in 2018 amid a larger fallout with the Palestinians that also saw the former president cut millions in aid to the West Bank and Gaza.

Yet similar to restoring aid to the Palestinians, the Biden administration will also face legal hurdles to reopen the mission. In 2019, Congress passed an anti-terrorism amendment that the Palestinians would become liable for $655.5 million in financial penalties against them in U.S. courts if they open an office in America proper.

“Under longstanding U.S. law, the PLO mission should be closed, but it remained open due to a presidential waiver. Trump didn’t renew that waiver,” said Gerber.

“Given that the PLO sponsors terror, I think it’s inappropriate for a terror-sponsoring entity to have offices in D.C. I guess others disagree. But if Biden issues a waiver and allows the PLO to reopen their mission, the administration will be effectively sanctioning terror,” he said.

These measures arise amid political uncertainty both in Israel and the Palestinians. For Israel, which has held four inconclusive elections in the past two years, this comes as the Biden administration has shifted its tone on Israeli policies from the Trump era.

And despite supporting Israel against an investigation by the International Criminal Court in The Hague on war-crime allegations, the United States dropped its sanctions against top ICC officials that had been imposed by the Trump administration.

Given this, it would seem that Washington would favor a change in leadership in Jerusalem.

“Using the past as a guide, the Biden administration would almost certainly prefer another prime minister to [Benjamin] Netanyahu,” said Schanzer.

Still, it appears that the political gridlock in Israel will not affect U.S.-Israel relations in the long term.

“The U.S.-Israel relationship is broad and deep,” said Schanzer. “Work is already underway, including at [the] high[est] levels. This will continue at a rigorous pace until there is a change of the guard. So, in this sense, I don’t think the political uncertainty is a significant factor at the moment.”

However, the brewing Palestinian political crisis could have significant ramifications, especially as the Biden administration is ramping up its efforts to restore ties. The P.A. will hold legislative elections next month as well as a presidential election in the summer for the first time in a generation.

“The readout from the Blinken call to Ashkenazi last week appeared to be an indirect call to allow the Palestinians to proceed with their planned May 22 legislative elections without preconditions,” said Schanzer. “I don’t see this as much as a break from Trump policy as a deliberate decision to ignore the painful lessons of the 2006 Palestinian elections, during which Hamas gained control of the PLC [Palestinian Legislative Council] and set off a political crisis that endures to this day.”

Indeed, the Palestinian elections in 2006 eventually led to the ouster of the P.A. from Gaza by Hamas, which the Palestinian terror group has used as a base, along with other operative groups, to launch rockets and terror attacks against Israel resulting in several wars and dozens of flareups over the last decade-and-a-half.

This could prove troubling again if Hamas gains victory in the upcoming Palestinian elections, which could lead to further instability, while also posing a dilemma for America and Israel over whether or not to engage with a P.A. controlled by Hamas.

“The White House decision to not take steps to prevent a Hamas victory strikes me as troubling, particularly since Hamas is a designated terrorist organization here in the United States,” said Schanzer. “This is almost certainly a recipe for another Palestinian crisis.”