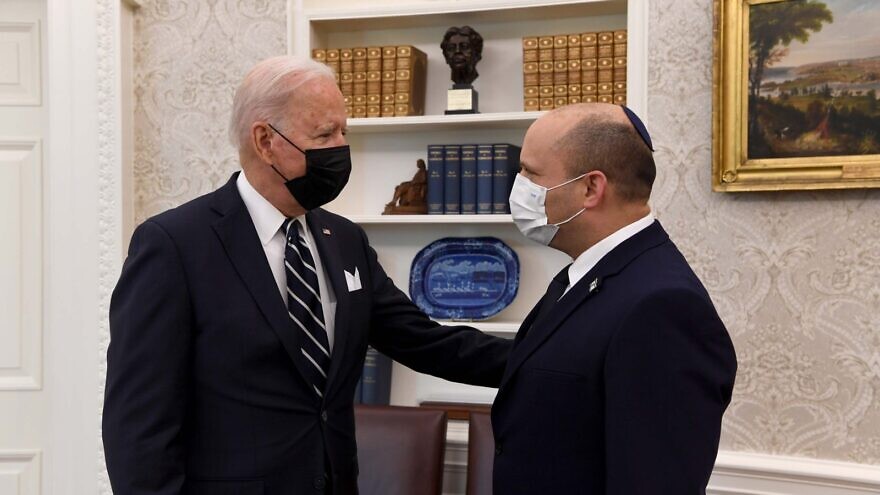 (August 27, 2021 / JNS) After a number of delays as a result of Thursday’s terrorist attacks in Kabul, Afghanistan, Israeli Prime Minister Naftali Bennett and U.S. President Joe Biden managed to sit for two meetings at the White House on Friday morning.

The first one started at 11:06 a.m., when the two leaders got to know each other for the first time, followed by a brief address to the media in the Oval Office just short of an hour later before starting another, expanded bilateral meeting where the pair was joined by members of their staff.

Biden said they spoke about a number of issues and connected over their familiarity of the Amtrak train system between New York and Biden’s home city of Wilmington, Del., which Bennett used to frequent during his time as a businessman in the United States.

The two men had spoken on the phone the previous day after their original meeting was canceled, with Bennett expressing his condolences for the 13 U.S. military personnel who died in the attack, in addition to the 18 who were wounded.

Sitting across from each other in front of the Oval Office fireplace, Biden first told the media about his morning meetings with his national security team on Afghanistan, which was the primary interest of the domestic media.

Biden then said that he and Bennett had already become fast friends after their meeting.

He said that they talked about the ongoing coronavirus pandemic, as well as vaccination booster shots, which Israel has begun providing for its citizens aged 60 years and older, or who have certain immune or other medical issues. Biden said the United States will likely start to offer the same as early as Sept. 20, pending approval by the Food and Drug Administration and the Centers for Disease Control and Prevention. 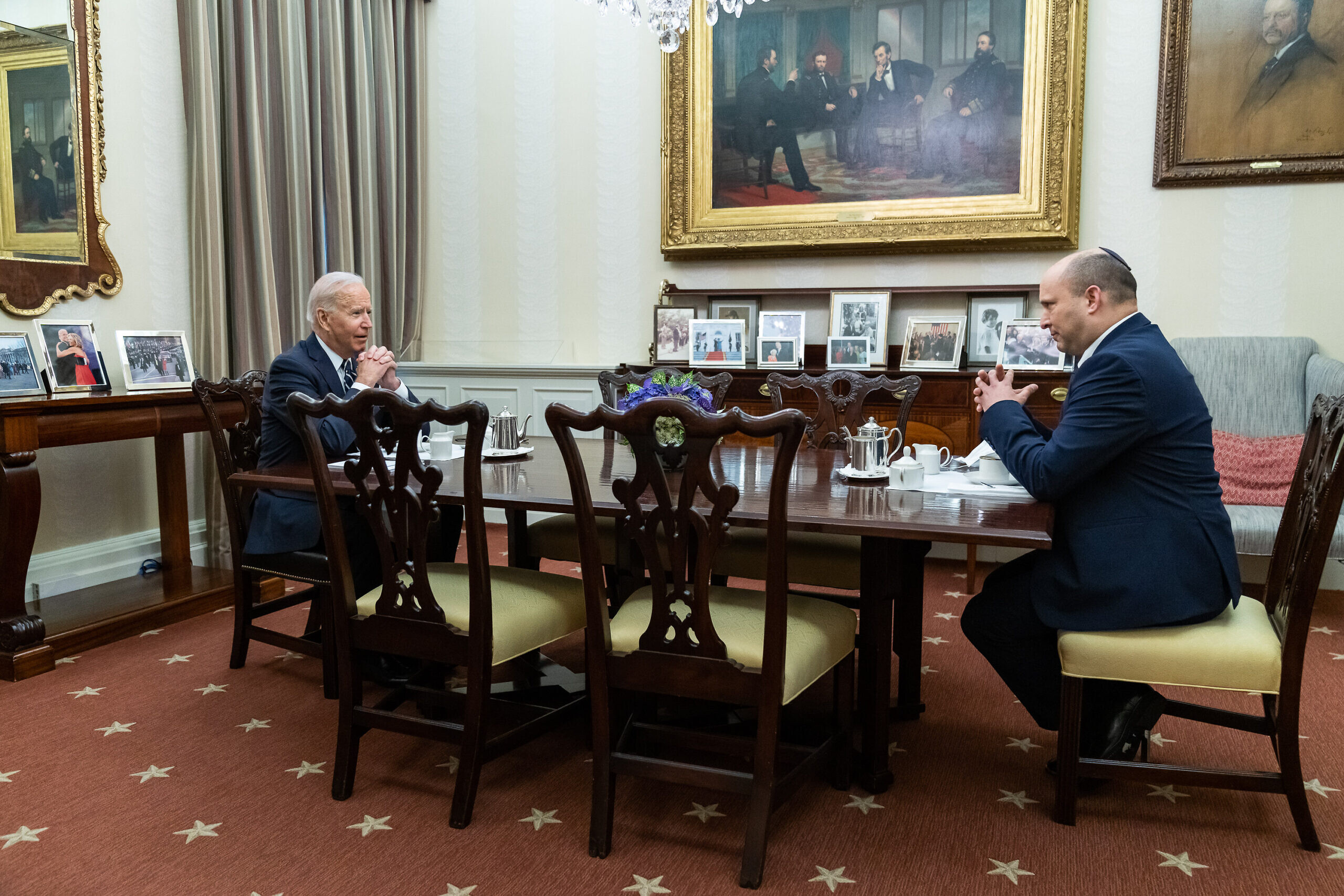 ‘Work together to build a better future’

The conversation invariably turned to Iran with Biden saying that Washington is committed to preventing Tehran from obtaining a nuclear weapon, despite ongoing efforts to bring Iran back into compliance under the 2015 nuclear deal, officially the Joint Comprehensive Plan of Action (JCPOA).

“We’re putting diplomacy first and seeing where that takes us,” said Biden. “But if diplomacy fails, we’re ready to turn to other options.”

Additional topics of discussion, said the president, included how to expand developing ties between Israel and its Arab neighbors, which got a major jump-start with last year’s Abraham Accords; how to advance peace between Israelis and Palestinians; and helping Israel fulfill the requirements to be added to the Visa Waiver Program.

“Mr. Prime Minister, I want to thank you again for coming. The U.S. will always be there for Israel,” Biden told Bennett. “It’s an unshakable partnership between our two nations, and I have known every Israeli prime minister since Golda Meir—gotten to know them fairly well—and I look forward to us establishing a strong personal relationship.”

Bennett then addressed the president in English, again repeating his condolences to the United States on behalf of the Israeli people.

“The American service members lost their lives while on a mission to save other people’s lives, and that’s the very definition of courage and sacrifice. May they rest in peace,” said Bennett. “Especially on this day, I want to be crystal-clear: Israel always stands together with the United States of America unequivocally. I also want to thank you for your warm words now in our private meeting, which attests to your support of the State of Israel, but that’s not new. It’s been decades, and you’ve always stood up for us, especially during tough times like a few months ago, when thousands of rockets were being shot on Israeli towns and cities. And that’s when friendship is really tested.”

Bennett said that he comes from Israel’s capital, Jerusalem, with a new spirit of goodwill, hope, decency, honesty, unity and bipartisanship, reflected in his governing coalition that is made up of multiple, often opposing parties.

“Yet we all share the deep passion to work together to build a better future for Israel,” he said.

Bennett outlined some of the challenges faced by the Jewish state, which he said is bordered by the terror groups ISIS, Hamas and Palestinian Islamic Jihad on its southern border, Hezbollah on its northern border and Iranian-backed militias all around it.

“And all of them want to kill us—kill Israelis. They all want to annihilate the Jewish state,” he said. “And that’s why Israel always has to be overwhelmingly stronger than any of our enemies, and indeed, of all our enemies combined.”

Along those lines, he thanked Biden for supporting Israel’s Qualitative Military Edge.

As far as Iran goes, Bennett said he was happy to hear Biden say it will never acquire a nuclear weapon, mentioning that there are other options to stop Iran if the diplomatic option the United States supports does not work.

“We’ve developed a comprehensive strategy that we’re going to be talking about with two goals. The first goal is to stop Iran on its regional aggression and start rolling it back into the box. And the second is to permanently keep Iran away from ever being able to break out a nuclear weapon,” he said, though he did not detail how this will be accomplished during the press availability.

Bennett then talked about Israel’s success in giving a COVID booster to its citizens, which began a month ago. So far, almost 3 million Israelis have received a third shot.

“The bottom line is its safe, and it works,” he said. “The good news, finally, is that the tide is turning in Israel.”

He ended the meeting by citing part of a Haftarah from the prophet Isaiah—first in Hebrew and then translated into English—, that will be read over Shabbat.

“What this means is, the sons and daughters of the Jewish people are going to come back to our land, are going to nurse our ancient land and rebuild it,” said Bennett. “And this ancient Jewish prophecy is today’s Israel reality. And it’s a miracle that you’ve been so central and so part of it for so many years.”

The two leaders did not answer any questions from the press, who were ushered out prior to the beginning of the expanded bilateral meeting.