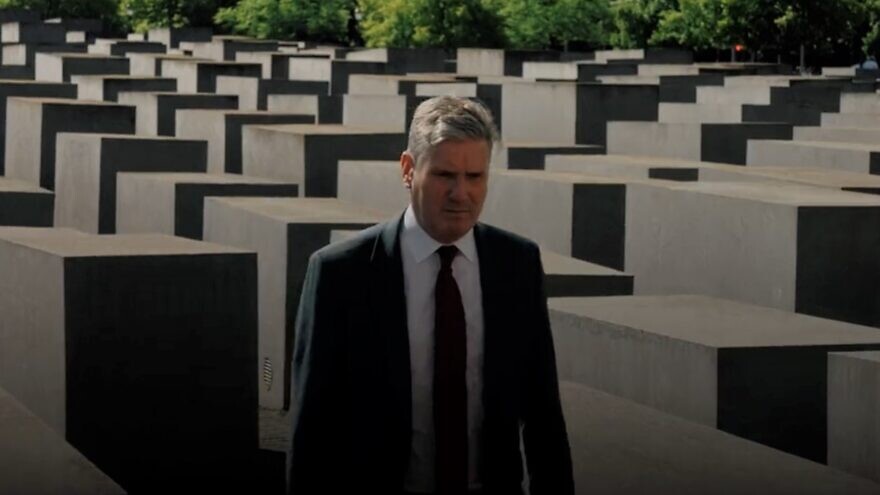 (July 19, 2022 / JNS) Jews in the United Kingdom and Germany are speaking out against a campaign ad from Labour Party leader Sir Keir Starmer, in which he is seen walking through the Memorial to the Murdered Jews of Europe in Berlin.

The campaign ad touts meetings Starmer had with German political leaders on a host of issues, none of which were specifically Jewish. Its airing comes as the Labour Party—once led by Jeremy Corbin, who often spoke out against Israel, attended pro-Palestinian events and was tainted by anti-Semitism run amuck—continues to deal with allegations of anti-Semitism and anti-Zionism within its ranks.

The Tikvah Institute in Germany was among those who took issue with the Labour ad. Using the hashtags #desturbing and #Berlin, it tweeted: “Hallo @UK Labour, why do you use the Holocaust Memorial (Memorial to the Murdered Jews of Europe) as a background for your election campaign video without even mentioned the Shoah with any single word?”

“It is a matter of decency and long-established convention in Germany that you never stoop to using the Berlin Holocaust memorial as some kind of a prop. But to incorporate the memorial as the backdrop for a political clip that does not even mention the Holocaust is an insult,” said Joe Glasman, Campaign Against Antisemitism’s head of political and government investigations. “This is especially so for a political party that itself still has serious problems with anti-Semitism in its ranks.”

Glasman said “exploiting a visit to the Holocaust memorial like this for campaigning purposes is not just tasteless, it is manipulative and repulsive.”

“Our most recent polling found that 81% of British Jews feel that anti-Semitism is still inadequately addressed under Sir Keir Starmer. Many feel that attempts to tackle racism against Jews in the Labour Party has been more of a public-relations effort than anything of substance,” he continued, adding that “this offensively crass PR video will do little to dispel that impression.”