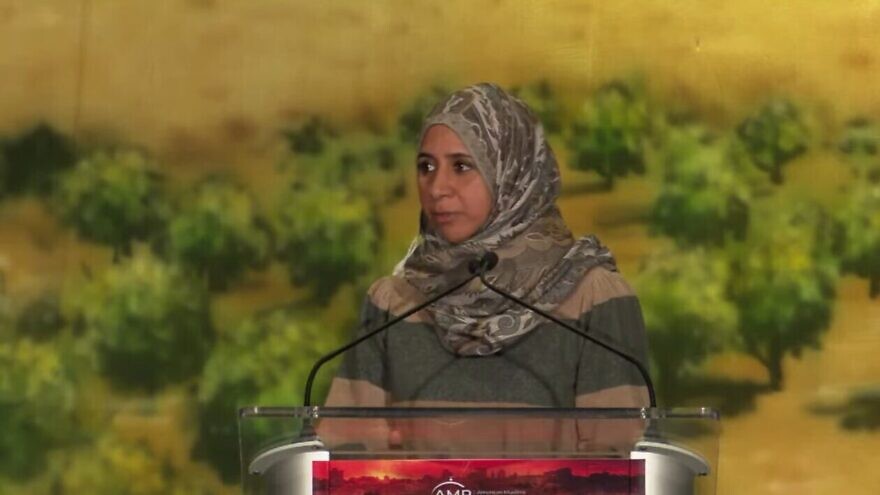 During a speech at the American Muslims for Palestine’s 14th annual convention on Nov. 27, Zahra Billoo, the Pakistani-American director of CAIR California-San Francisco Bay Area, told the audience that “polite Zionist” organizations that support a two-state solution, condemn Islamophobia and promote interfaith cooperation, such as the Anti-Defamation League, Hillel International, Jewish Federations of North America and Zionist synagogues, should be watched and are part of a vast conspiracy against Muslims.

“All of you in this room and hopefully everyone within six degrees of separation from you knows that Islamophobia is a well-funded conspira [sic] … a well-funded project. A well-funded project to marginalize us, to imprison us, to deport us, to silence us,” said Billoo, adding that they have to connect the dots.

“The organizations that promote Zionist agendas, materials, marketing and legislation are the same ones that want to ban Muslims. Are the same ones that want to pass anti-Sharia legislation,” she said. “The police officers in the United States who kill unarmed black men, women and children, are trained by the Israeli military. The technology that is used at the U.S.-Mexico border is the same technology used at the apartheid wall. We have to make these connections because if we don’t, they are doing it anyways.”

Billoo said that while most of the attention is focused on those she calls “vehement fascists”—listing Daniel Pipes, Steven Emerson and Pamela Geller—she said that Muslims should not lose sight of organizations that attempt to stand in solidarity with Muslims.

“So oppose the vehement fascists, but oppose the polite Zionist, too; they are not your friends. They will not be there for you when you need them,” she continued. “Because the next thing I’m going to tell you is to know your enemies. And I’m not going to sugarcoat that—they are your enemies. There are organizations and infrastructures out there who are working to harm you. Make no mistake of it. They would sell you down the line if they could. And they very often do behind your back. I mean the Zionist organizations; I mean the foreign-policy organizations who say they’re not Zionist but want a two-state solution. I’m not a Palestinian myself, but it’s my understanding that that is laughable.”

When reached by phone on Dec. 6, Ibrahim Hooper, CAIR’s national communications director, said he had not been following the controversy closely and would not comment.

Instead, Hooper forwarded a link to a press release from August 2020, where CAIR joined a coalition of groups in denouncing the ADL, saying that it had a “history and ongoing pattern of attacking social justice movements,” immigrants, Arabs, Muslims “and other marginalized groups while aligning itself with police, right-wing leaders and perpetrators of state violence.”

The release called on the coalition and its partners to cut their ties and working relationship with ADL.

The release listed accusations against the ADL, including surveillance of progressive organizations and movements; support for militarized police-training exchange programs; suppression of human rights and Palestinian voices; support for racist and white-supremacist influencers; promotion of Islamophobia; suppression of campus activism; and trampling on progressive social-justice movements.

Contacted multiple times by JNS again on Dec. 8, Hooper said he would contact those who would respond ( as he was “busy with other things”) but said if there was no response from him later that day, it is because CAIR chooses not to respond to the allegations. No response was received by press time.

“This is a blatant lie,” the organization said. “In fact, Zahra praised the many Jewish activists and groups that support human rights for all people, including Palestinians, and specifically encouraged Muslims to engage in interfaith collaboration with Jewish organizations such as IfNotNow and Jewish Voice for Peace. We strongly condemn this online smear campaign against our sister and colleague, Zahra Billoo.”

CAIR said that they would “continue to proudly stand by Zahra and all American Muslim leaders who face smears and threats because they dare to express an opinion about Palestinian human rights.”

‘Call on people of all faiths to reject these outrageous statements’

Meanwhile, attention and outrage increased within the Jewish community, primarily among the left-leaning pro-Israel groups targeted in the speech.

“This is textbook vile, anti-Semitic, conspiracy-laden garbage attacking the mainstream U.S. Jewish community. It sounds like something you would expect from white supremacists,” tweeted Jonathan Greenblatt, ADL’s CEO. [CAIR] must condemn their staffer [Zahra Billoo] for this awful, unapologetic bigotry. And any org that claims to fight for social justice should cut ties with anyone who spouts such hate.”

Eric Fingerhut, CEO and president of the Jewish Federations of North America, said “the extremist, fringe nature of these positions are clear in the unapologetic use of anti-Semitic tropes in describing the Jewish community and direct calls for enmity with Jewish Federations, the ADL, and Hillel—organizations that, together with others, represent the vast majority of the U.S. Jewish community. We call on people of all faiths to reject these outrageous statements, which we will not allow to undermine our long history of cooperation and friendship with the American Muslim community.”

It wasn’t Billoo’s first time attracting the ire of the Jewish community. She was previously ousted from her short stint on the board of the progressive Women’s March for tweets that were widely condemned as anti-Semitic.

“As someone who has been repeatedly attacked by the execrable Zahra Billoo for almost 15 years, and as recently as her notorious American Muslims for Palestine talk two weeks ago, I am amused that the Anti-Defamation League, Jewish Federations, Hillels and ‘Zionist synagogues’ (as she dubbed them) only become upset with her when she called them out as ‘polite Zionists.’ ” Daniel Pipes, president of the Middle East Forum, told JNS in an email. “Glad you woke up, guys, and welcome to the club.”

David Lange, executive director of Israellycool Israel Advocacy, who brought attention to the speech, said in a blog post that Billoo’s speech “should be considered dangerous incitement against the U.S. Jewish community.”

StandWithUs, a pro-Israel group based in California, condemned both Billoo and Awad in a news release on Wednesday, calling the speeches overtly anti-Semitic. It pointed out that Awad calling Tel Aviv “occupied” territory that will be “free” in the future is “a thinly veiled call for the elimination of Israel.”

“It is deeply unfortunate that an organization dedicated to fighting anti-Muslim hatred and discrimination would actively promote hatred and discrimination against Jews,” said Roz Rothstein, CEO of StandWithUs. “Sadly, this is far from the first time CAIR leaders have engaged in anti-Semitism. It should be clear that it is impossible to fight hate with more hate. We urge the ACLU, Amnesty International, and other major partners of CAIR to either hold the organization accountable or end their partnerships. Standing idly by in the face of overt antisemitism is a moral failing.”

“These attempts to turn marginalized communities against one another set back the cause of building a just and secure future here at home, as well as in the Middle East,” the organization said in a statement.

“Replacing the word ‘Zionists’ with the word ‘Jews’ in her remarks reveals the dog whistle used in a poor attempt to obscure classic anti-Semitic conspiracy theories. Half of the world’s Jewish population lives in Israel, and opinion polls consistently show 80 percent to 90 percent of Jewish Americans hold an affinity with Israel, even as they hold wide-ranging and often critical views of its political leadership,” it continued.

“ ‘Zionism’ is an umbrella term referencing Jewish self-determination and sovereignty in our ancient homeland of Israel—not an ideological or prescriptive position on the Israeli-Palestinian conflict,” said the JCRC. “Put simply, the identities of an overwhelming majority of Jewish Americans and global Jewry include attributes of Zionism in meaningful ways.”

The JCRC of San Francisco encouraged its partners and allies to join it in getting involved in more interfaith and intercommunal efforts in marginalized communities such as resettlement of Afghan refugees; accountability of law enforcement and policing practices; addressing rising hate crimes against Asians and Muslims; supporting fair and inclusive ethnic studies in schools; and addressing racial and economic disparities in society.

“And when it comes to Israel and Palestine, JCRC strongly supports a two-state solution, works to amplify coexistence organizations working on the ground to bring peace and a shared future for Israelis and Palestinians, and promotes civic discourse around the conflict here at home to build respect and understanding of each other’s narratives,” the statement said.

“Interfaith efforts are critically important for a secure Jewish future and, as we said in our statement, we believe they are needed today more than ever,” said Jeremy Russell, director of marketing and communications at JCRC of San Francisco. “It’s our intention to double down on this important intercommunal work. Nor can the hateful opinions of one individual—or even one group—be said to reflect the full range of thoughts and feelings of a large, diverse community filled with multifaceted individuals.”