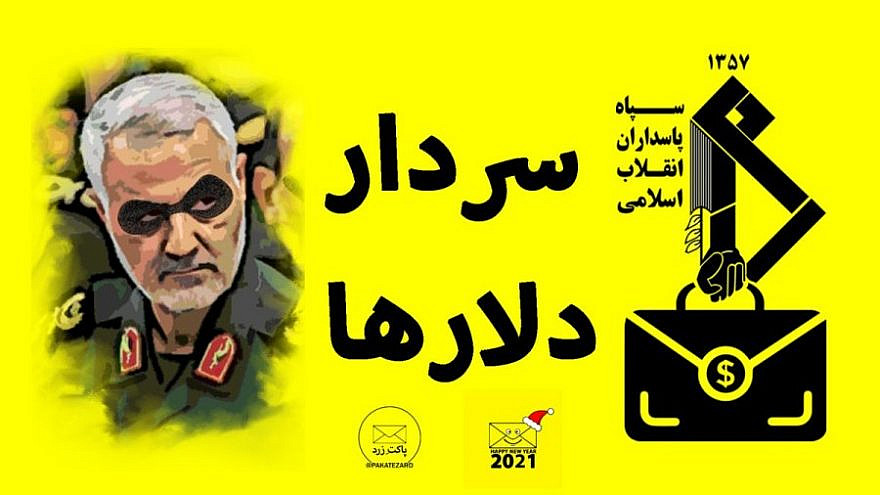 (January 11, 2021 / JCPA) In a memorial tribute to Qassem Soleimani, a senior Hamas official boasted that the assassinated military leader had provided Hamas with $22 million in cash in 2006. Soleimani, the commander of the Quds Force of the Islamic Revolutionary Guard Corps (IRGC-QF), was assassinated on Jan. 3, 2020, in an American drone strike.

Mahmoud al-Zahar, a founder and senior leader of Hamas, disclosed this to several television channels, including Al-Alam, an Iranian propaganda station targeting Arab audiences. His revelation provoked a wave of angry reactions on Iran’s social networks, and the hashtag #Dollar_Bagage (#چمدان_دلار) trended, with thousands of mentions in Persian.

Al-Zahar said that the Hamas delegation, of which he was a member, visited Iran in 2006 and met with Soleimani in Tehran. Al-Zahar said that during the meeting, the delegation emphasized the need for assistance for paying salaries and improving Hamas’ dawah charity system in Gaza. A senior Hamas official added that the next day, “when we were at Tehran airport, I saw suitcases with $22 million. Each of the suitcases weighed 40 kilograms and could not take any more from Iran, even though it was agreed with Soleimani that Iran would transfer a larger sum.”

The publication of an extensive article on al-Zahar’s remarks, together with a commentary on Radio Farda’s popular website on Dec. 28, 2020, generated a huge wave of critical comments in Iran and abroad, seriously damaging the regime’s propaganda campaign on the eve of the first anniversary of Soleimani’s death. Some social network operators mocked Soleimani, calling him the “Dollar Commander,” and even displayed pictures and videos from Gaza showing residents ripping down posters of him hung by Hamas throughout the Gaza Strip.

Masih Alinejad, a well-known Iranian activist in the United States, addressed regime supporters on her Twitter feed: “They (the regime) cheated you: Soleimani was the dollar commander, not the leader of hearts,” as the regime repeatedly claims in its major campaigns in memory of the commander who was eliminated.

Dariush Zand, an Iranian journalist and human-rights activist, wrote on his Twitter feed: “The $22 million given Soleimani in the suitcase to Hamas was supplied from the same oil well where a poor laborer named Omran Roshani, out of poverty and non-payment of salaries, hung himself and died.”

Omran Rushani was employed as a security guard at the Yadavaran field in Khuzestan province. The company did not pay its employees’ salaries, and in desperation, Rushani hanged himself.

Asiyeh Panahi, who lived with her daughter and granddaughter in a shed in Kermanshah, died in June 2020 while trying to stop municipal workers from destroying her home. The woman was a mother of seven.

The widespread social-media campaign, titled “Suitcases of Dollars,” once again proves that despite the regime’s ongoing widespread crackdown on protests against it—especially against the “generous” assistance it provides to terrorist organizations outside of Iran at the expense of the Iranian people subject to sanctions—it continues to bubble beneath the surface. The protest awaits the right time to break out, and al-Zahar provided the conditions for a kind of perfect storm—connecting the regime’s adventurous and wasteful policies to the Iranian people’s predicament in various fields and sectors.

At the end of Aug. 2017, Yahya Sinwar, a released prisoner from the Gilad Shalit prisoner exchange, was elected to head the Hamas political bureau in Gaza after years of tensions between Iran and Hamas over the war in Syria. Sinwar declared that the conditions between the two were “excellent and had returned to their earlier state.”

He went on, “Hamas continues to train its people for the mission of liberated Palestine, and the Iranian Islamic Republic plays a central role in all that’s related to this goal through financial and military aid and providing training for the Izz a-Din al-Qassam Brigades.”

He defined the Iranian aid as “strategic” in the battle against the “Israeli occupation.”

Many Iranians said that al-Zahar’s statement was further evidence of Iran’s generous aid to the militias it supports in the region. Many of the activists on social media recalled that demonstrators, especially members of the working class, voiced the slogans: “Not for Gaza, not for Lebanon, [I am] sacrificing my life for Iran.”

Some social-media users emphasized that the “dollar suitcases” were just “the tip of the iceberg,” and that much of the Islamic Republic’s assistance in this matter had not yet been disclosed.

Less than a week after al-Zahar spoke, and during the memorial ceremonies for al-Quds Force Commander Soleimani in Iran, Mohammad Raza Naqdi, a member of the Revolutionary Guard’s General Staff, told Iranian television that Iran had spent more than $17 billion on “global cultural activity, diplomacy and regional defense” over the past three decades.

He said that these expenditures were essential to protecting Syria and Iraq to counter U.S. activities in the region, and among other things, “establishing the Islamic State organization to save the Zionist entity (sic) and advance its goals in the region.”

Naqdi praised Soleimani’s activities, especially the assistance he had offered to the resistance camp in the area.

In May 2020, the former chairman of the Majlis (Iranian parliament) Security and Policy Committee, Hashmatullah Falahatpishe, said that Iran had transferred $30 billion to Syria, and that it had to repay “the money of the Iranian people given to Syria.”

Despite continued criticism at home over the wasting of financial and logistical resources outside the country, Iran will continue to assist Hamas and the other Palestinian organizations, and continue to provide money and weapons to the “Resistance Camp.”

Iran views this camp as an important component of its national-security strategy, and in its efforts to attrite Israel and retaliate against Israeli actions in Gaza and Lebanon. Tehran’s success in “surviving” the administration of U.S. President Donald Trump may also encourage it to continue its strategy, as part of the continued struggle against Israel and American presence in the region, as well its efforts to deepen disputes in the Sunni-Arab world in general and among the Gulf States in particular.

Hamas, despite its independent path that is sometimes inconsistent with Iran’s intentions, is considered by Iran to be a vital component of the resistance camp that challenges not only Israel, but also Saudi Arabia and Egypt, the main components of the “moderate” Arab camp. As such, Hamas contributes to increasing Iran’s influence in the region.

IDF Lt. Col. (ret.) Michael (Mickey) Segall, an expert on strategic issues with a focus on Iran, terrorism and the Middle East, is a senior analyst at the Jerusalem Center for Public Affairs and at Acumen Risk Advisors.