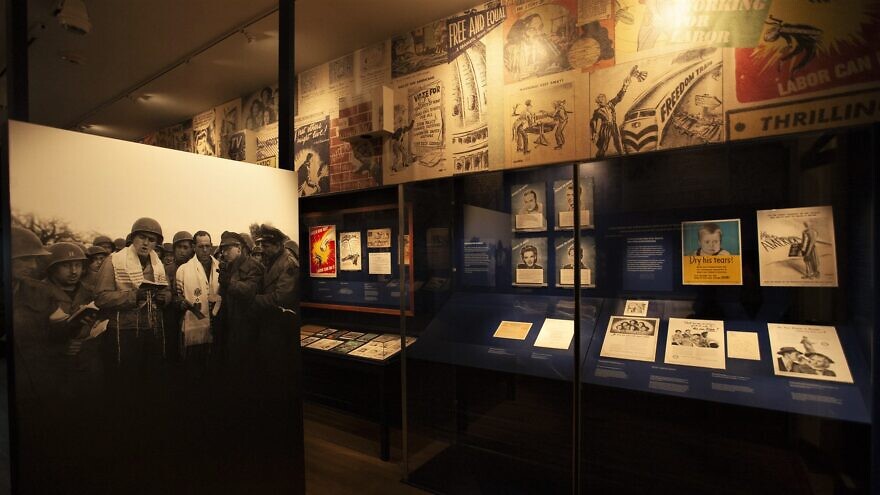 (August 5, 2022 / JNS) It almost looks like a comics display when first walking into the “Confronting Hate 1937-1952” exhibit at the New York-Historical Society on Manhattan’s Upper West Side. “Thrilling,” “extra,” “Joe the Worker” and “TV Spots” pop out from the enlarged comics wrapped around the top of the display cases in a small room of what is said to be the city’s first museum.

“It’s extremely timely,” said Debra Schmidt Bach, curator of the exhibit. “It addresses the current state of affairs. The whole idea of fighting against bias of all groups is very important. It is timeless.”

The small space in a side room at the towering, huge museum complex tells the story of the American Jewish Committee’s unique way to combat anti-Semitism, mostly through cartoons, comic books and engaging advertisements. The exhibit started last month and runs until Jan. 1.

“Don’t just stand there. Get me some white, native-born, sixth-generation American stretcher-bearers,” one comic strip of the “Mr. Biggott series,” published in hundreds of newspapers, declared the comic of man who slipped on a banana peel. Another strip depicting a man holding a clarinet standing at the entrance to the U.S. Army General Hospital says, “I have come to entertain the wounded. Lead me to the ward for white, native-born, sixth-generation Americans.”

The campaign that went from 1937 to 1945 was spearheaded mostly by Richard Rothschild, a writer of philosophy who also worked for an advertising agency. “The problem was how to prevent Nazi-type anti-Semitism,” Rothschild said in a 1973 interview, “then the official policy of the German government from establishing itself firmly in this county.” 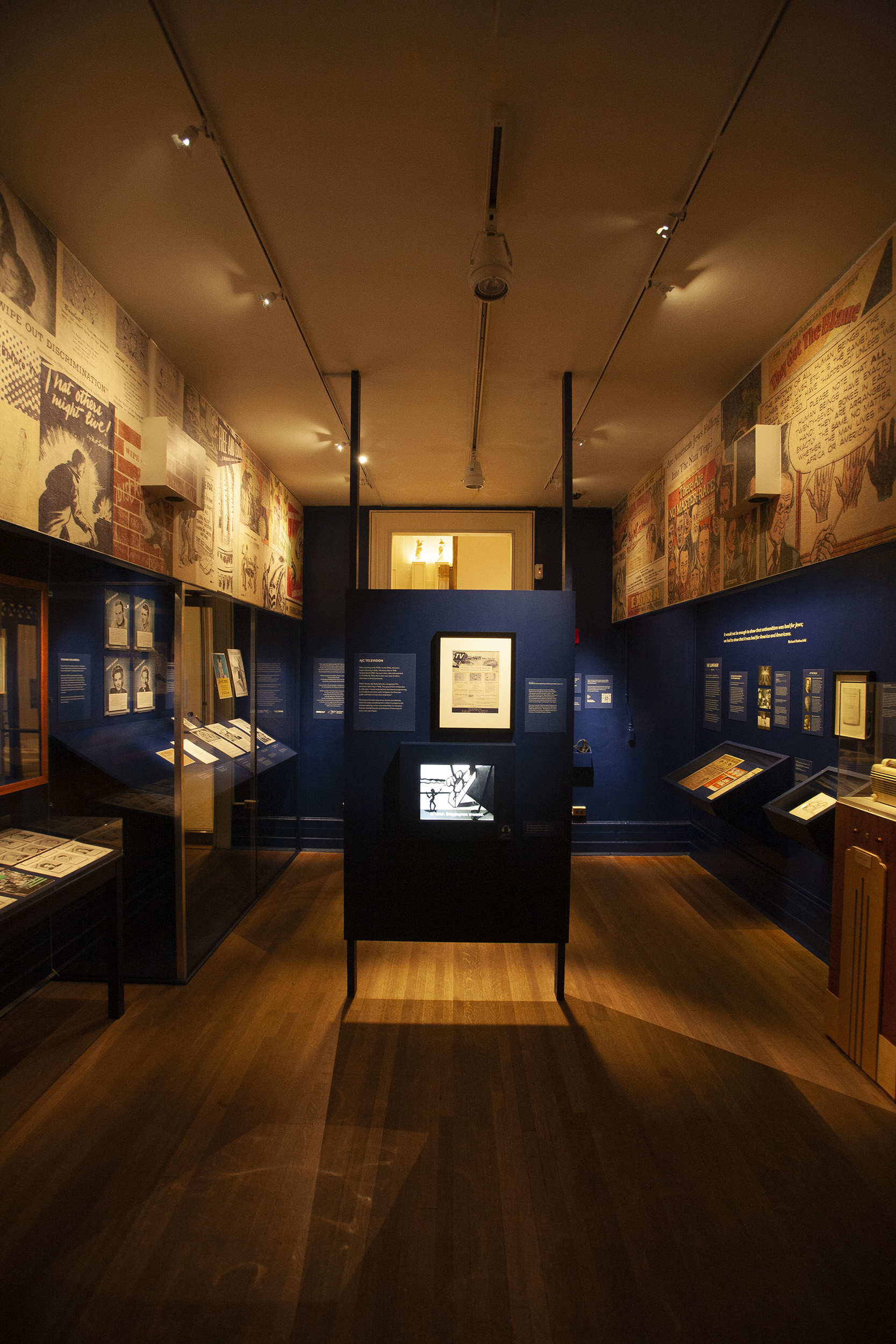 He totally ignored the rhetoric from the anti-Semitic American Gentile newspaper, presented at the opening of the exhibit that reads: “Let’s take America away from the Jews,” where in order for America to be “free to survive,” the Jewish “Carthage must be destroyed.”

Rothschild went on to explain that there needs to be a specific social remedy for a specific social malady, with anti-Semitism being no exception. Nazism, he said, wanted to spread internal discord. Taking their cues from military strategy, they wanted to divide and conquer. “Divisiveness can be the source of a country’s greatest weakness,” he said.

Thus, instead of a campaign about Jews, he produced comic books that spoke about the importance of unity. One with the heading, “The Story of Scapegoats in History: They Got the Blame,” does a quick review of the history of scapegoats in India and how the Romans persecuted the Christians, and then on to Hitler’s persecution of Catholics. “In Germany, you must preach only the word of Adolf Hitler,” a German soldier is seen hollering. The comic continues, noting that Hitler’s diabolic scheme embraced the whole world. “Every country has minorities. In America, especially, it will be easy for our agents to incite group against group. Remember the bigger the lies we tell, the quicker the people will believe them!”

After seven pages, it depicts Hitler flooding America with Nazi propaganda, telling the reader they are trying to split America into two: “Blame everything on the Jews! Unemployment, high prices, everything! It worked in German, and it will work here.”

The comic ends with a man declaring, “You can’t pull the wool over the eyes of real Americans.” The final message, with the art of people from various nations with their flags flying in the back, states, “Marching together in common cause of human freedom, the men and woman of the united nations are determined to build a world free of prejudice and intolerance. … Do unto others as you would have others do unto you!”

Rothschild explained that anti-Semites portrayed themselves as “defenders of all the good” and the Jews as “enemies of mankind.” What he aimed to do was eliminate this idea. “The anti-Semites themselves had to be put on the defensive; they had to be the ones in the criminals’ dock,” he said. 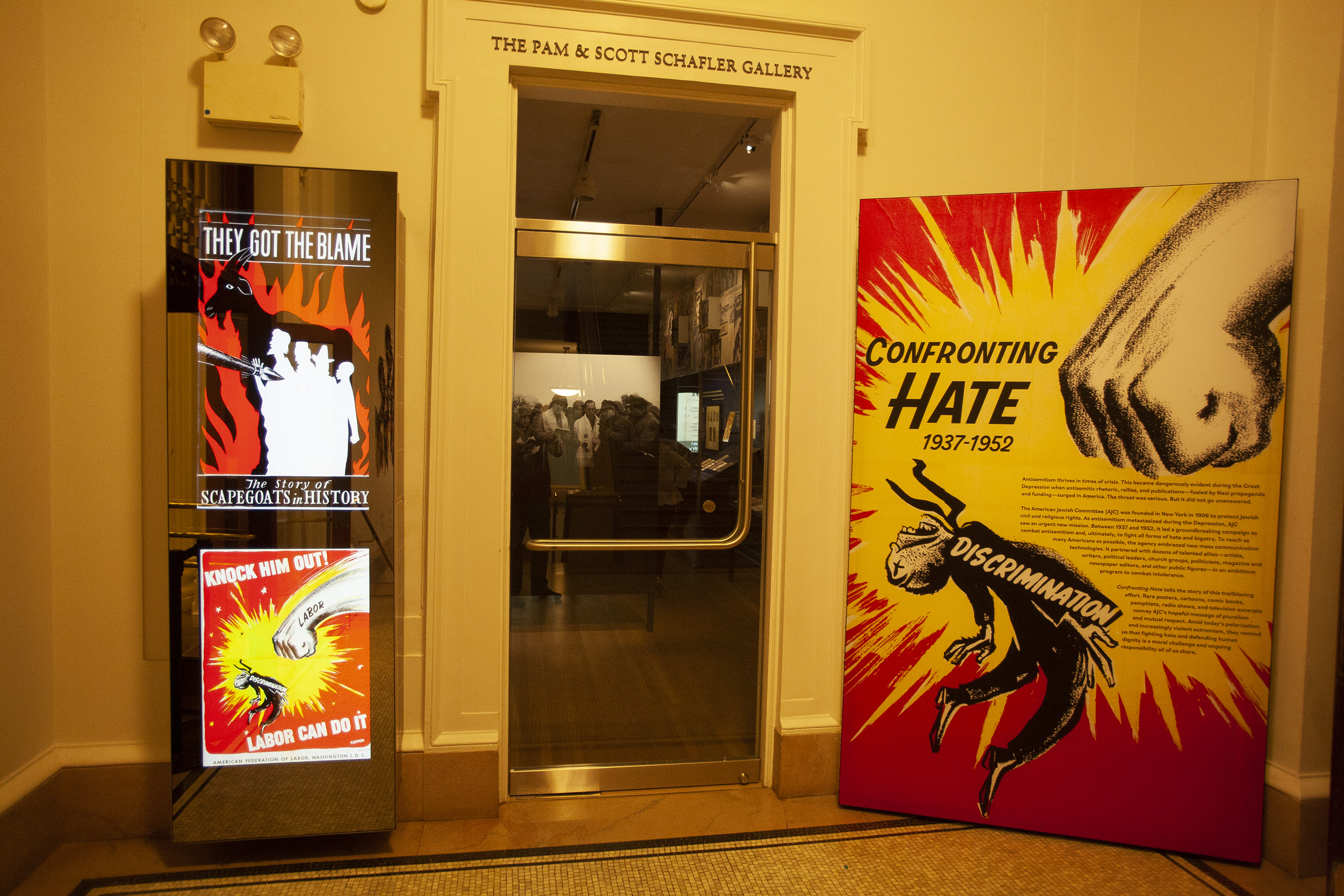 The director of AJC’s archive, Charlotte Bonelli says that this program to combat anti-Semitism was cutting-edge for its times, “They had the willingness to embrace something new, new technology,” she said, adding that prior to this campaign, it was more about diplomacy; “going into the world with mass media is something new for them.”

For the first six years of the project, the AJC did not use its name. That changed after the Warsaw Ghetto Uprising in 1943, when they began to produce one-minute programs to be broadcasted on the radio.

From an antique radio, visitors can hear one such broadcast at the exhibit. “You know, boys and girls, we’re all Americans,” the broadcaster says. “I’m an American, and you’re an American, and your mothers and daddies are Americans … maybe you know a boy or girl who is different from you. I mean whose skin is a different color, black or brown or yellow.”

While the material has been known for more than a decade and has been touted by the AJC for even longer, this exhibit could have not come at a better time. The Anti-Defamation League reported earlier this year that in 2021, anti-Semitism reached the highest level since they began tracking it in 1979. This includes of 2,717 reported incidents of assault, harassment and vandalism, with more than 680 “Jewish individuals violently beaten in the streets from New York to Los Angeles” last May during Israel’s 11-day conflict with Hamas in the Gaza Strip.

With that, “Confronting Hate,” says Bonelli, doesn’t tell you how to combat anti-Semitism; the message is to not give in to fear or cynicism. “Not that they are going to wipe out anti-Semitism and racism,” the archivist says, “but they believe that they can make progress.”

Schmidt Bach says that the material expresses optimism and goes beyond explaining that Jews are just like the others: “Even if you don’t understand someone who is different than you, there is so much that we could learn from each other.”