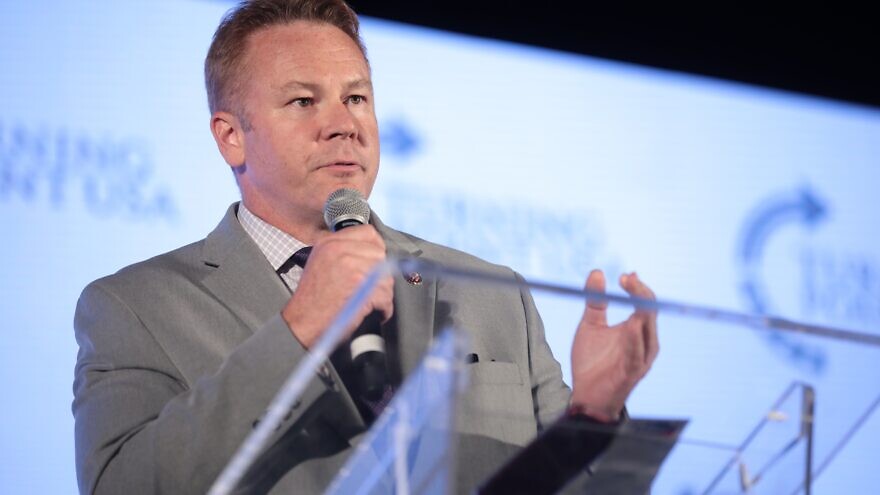 (January 14, 2022 / JNS) A Congress member apologized on Thursday after being criticized for comparing the Holocaust to coronavirus regulations.

After Washington D.C. Mayor Muriel Bowser announced that starting on Saturday, proof of at least one vaccination is required to enter D.C.’s indoor food and drink establishments for those 12 and older, Rep. Warren Davidson (R-Ohio) made a series of tweets comparing the rules to laws in Nazi Germany and urging people not to comply.

“This has been done before,” tweeted Davidson, adding a picture of a Nazi-era health pass. “Let’s recall that the Nazis dehumanized Jewish people before segregating them, segregated them before imprisoning them, imprisoned them before enslaving them and enslaved them before massacring them.”

Davidson’s tweets were derided by Jewish organizations and other politicians.

“In what is becoming a disturbing trend, [Warren Davidson] is the latest elected official to exploit the Holocaust by making immoral and offensive comparisons between vaccine mandates and this dark period of history,” tweeted the American Jewish Committee. “Congressman, you must remove this shameful post and apologize.”

“Exploiting the tragedy of all people who between 1933-45 suffered, were humiliated, tortured and murdered by the totalitarian regime of Nazi Germany in a debate about vaccines and COVID limitations in the time of global pandemic is a sad symptom of moral and intellectual decay,” tweeted the official account of the Auschwitz Memorial.

“Yad Vashem strongly condemns the use of the Holocaust to further agendas that are totally unrelated to the Holocaust,” according to Yad Vashem’s official Twitter account. “Manipulating the Holocaust in this way trivializes the horrific atrocities that were perpetrated and denigrates the memory of victims and survivors.”

The next day, Davidson issued an apology on Twitter to those he offended, though still defended his point.

“Bad things happen when governments dehumanize people. Sometimes, there is a next step—to systematically segregate them,” he tweeted on Thursday. “Unfortunately, any reference to how the Nazis actually did that prevents a focus on anything other than the Holocaust. I appreciate my Jewish friends who have explained their perspective and feel horrible that I have offended anyone. My sincere apologies.”

Davidson is one of a number of politicians in the country who have compared COVID-19 safety regulations and vaccines to the Holocaust.

In June, U.S. House of Representatives colleague, Rep. Marjorie Taylor Greene (R-Ga.) publicly apologized after saying during a broadcast interview that a rule by Speaker of the House Nancy Pelosi that House members must show proof of vaccination before entering the legislative chamber without a mask was akin to the Nazis’ marking the Jews with yellow Stars of David.